From ‘Dialogue’ to ‘Protector’ – NATO’s Role in the Middle East

Simulation-Workshop at the European Forum of the Hebrew University

On June 1 2014, 19 students of the Hebrew University participated in a simulation of a NATO North Atlantic Council (NAC) session on the future of the Mediterranean Dialogue (MD). Twenty years after the inauguration of the MD in 1994, ambassadors to NATO gathered to consult and deliberate on future forms and content of cooperation with MENA countries in the run-up to the NATO summit to be held in Cardiff, September 2014.
June 19, 2014 Ordering Information 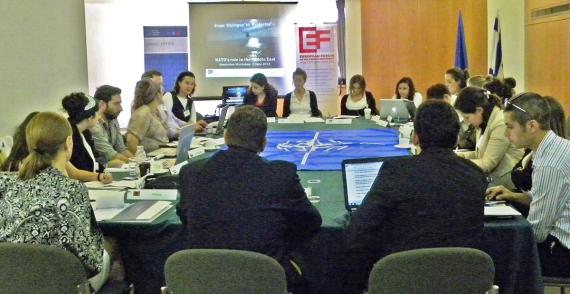 The subject matter was studied intensively by the students who prepared themselves for the culminating event of the simulation by researching “their” countries’ positions with regard to the MD and their take on where NATO could add value in the region.

Following the preparations, the students gathered at Beit Meiersdorf, Hebrew University of Jerusalem, to discuss the partnership between NATO and the current seven MENA countries (Middle East North Africa). The event was officially opened by Prof. Ruth Fine, Director of the European Forum, who welcomed the students and pointed out the high degree of relevance of the subject - especially for Israel.

Following the preparations, the students gathered at Beit Meiersdorf, Hebrew University of Jerusalem, to discuss the partnership between NATO and the current seven MENA countries (Middle East North Africa). The event was officially opened by Prof. Ruth Fine, Director of the European Forum, who welcomed the students and pointed out the high degree of relevance of the subject - especially for Israel.

On behalf of the Konrad-Adenauer-Stiftung Israel, the co-organiser of the event, Mrs. Catherine Hirschwitz addressed the participants and expressed the Foundation’s continuing intent to support the intensive use of simulations in teaching European Security issues.

The proceedings were then opened by the “NATO Secretary General”. The ambassadors first of all had the chance to deliver an opening statement on the MD and their visions for its future.

Suggestions for new forms of cooperation were introduced and the discussion quickly steered towards the question whether 1. a value-based approach could and should be continued in the dialogue or 2. if, as experience would suggest, the intent to influence the political development of some partners through this partnership should be abandoned in favour of a practical and operational cooperation.

The students were noticeably well prepared, recognising the various conceptual shortcomings of the MD, i.e. the diverging views of the partnership by allies as well as partners and the perceived lack of tangible benefits for partners. They subsequently tried, in creative ways, to address that issue by proposing and discussing security guarantees for the partners in light of the Iranian nuclear ambitions. These courageous proposals could not find consensus but led to enlightening discussions.

These discussions continued throughout the day and even during the “working lunch”. The formal as well as informal exchanges were gathered into a draft declaration to be submitted as a basis for discussion in the run-up to the September summit.

Following the successful completion of the simulation-workshop, the students engaged in an intensive guided debriefing session reflecting on their impressions. The tenor was that the Mediterranean Dialogue was an interesting but also very challenging policy field that they, for the most part, had not been aware of.

Furthermore, the chance to explore a specific European country’s stance on such an issue was perceived as intriguing. The chance to conduct a simulation on such a subject was repeatedly welcomed.

Summing up, the simulation offered the participating students the chance to actively use the knowledge they had gained in the online-tutorial, the class lectures and their individual research – deepening their theoretical understanding of NATO, its members’ interests and the Mediterranean Dialogue.

Simulation Workshop: From “Dialogue” to “Protector”