Towards a joint system of higher education for the 21st century 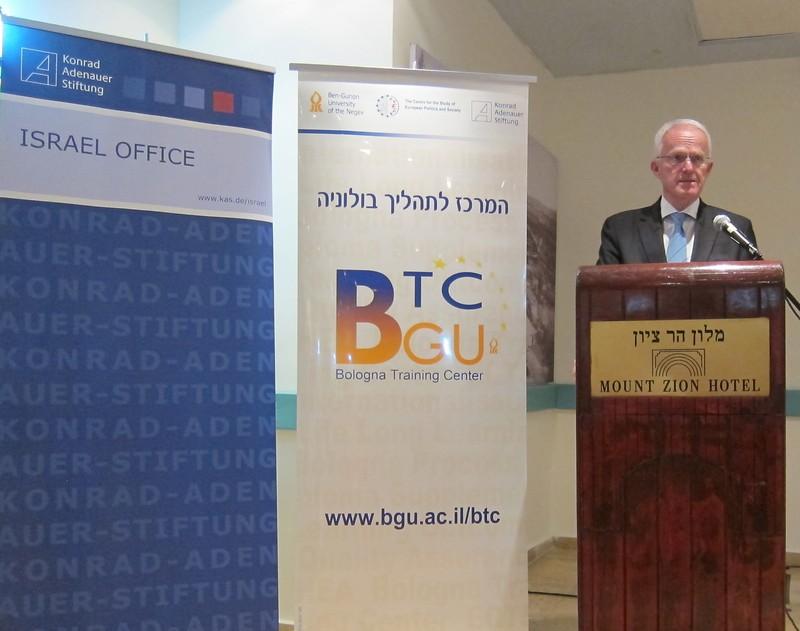 In his keynote speech, Dr. Jürgen Rüttgers provided the audience with an “inside look” into the considerations which led to the drafting and signing of the Sorbonne Declaration; he also offered insight into the primary ideas and values behind its initiation. 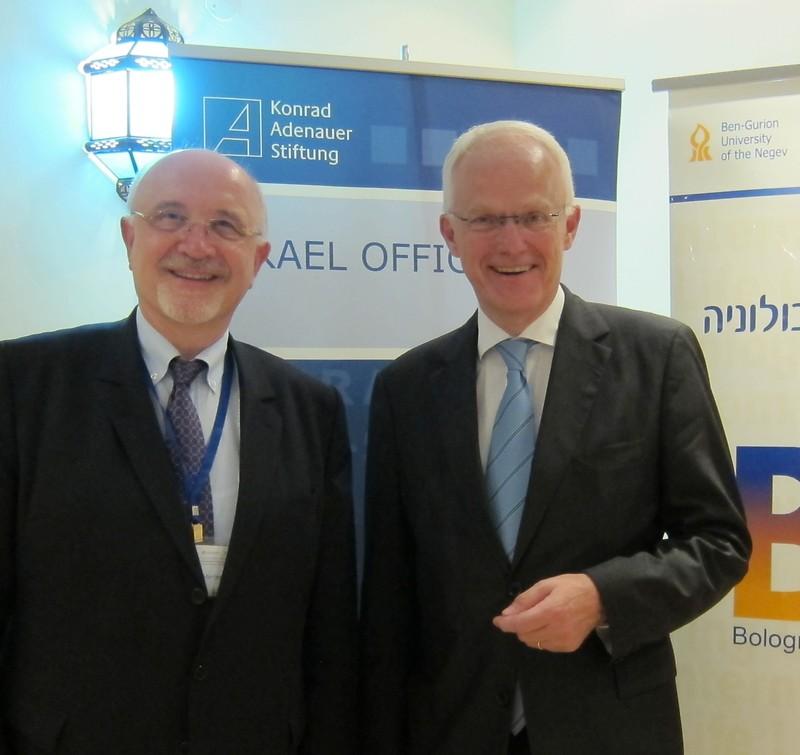 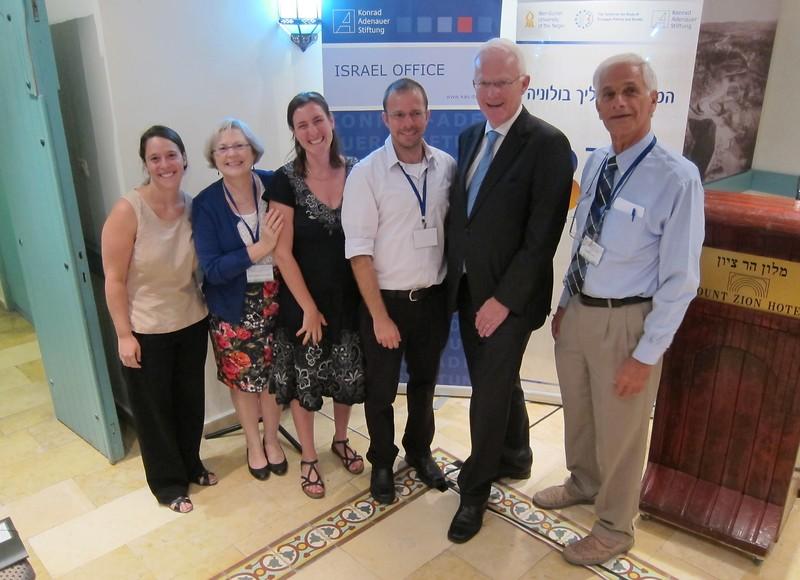 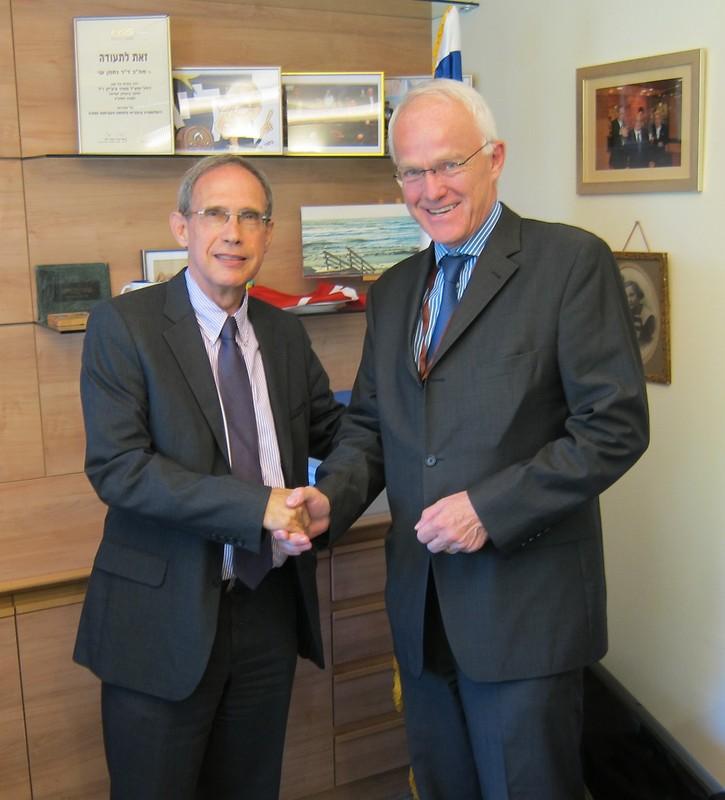 On June 17, Jürgen Rüttgers and Michael Mertes visited the Knesset and explained the idea behind the BTC project to MKs. The picture shows Dr. Rüttgers and MK Dr. Nachman Shai, the Co-Chairman of the Israel-Germany Parliamentary Friendship League in the Knesset.

Mr. Moshe Amir, Director of the Bologna Training Center, greeted the guests and offered the conference’s introductory remarks. Mr. Amir described the evolution of Israel’s “encounter” with the Bologna Process which developed from an initial lack of awareness; to an increasing interest among stakeholders in the higher education system; and finally to the beginning of a discourse at the policy level. Mr. Amir discussed the crucial need for the Israeli higher education system to position itself in relation to the European Higher Education Area.

Mr. Michael Mertes, Director of the Konrad-Adenauer-Stiftung in Israel, followed Mr. Amir’s introduction with his personal greetings to the participants and guest speakers. He introduced the conference’s keynote speaker, Dr. Jürgen Rüttgers, who is a member of the board of the Konrad-Adenauer-Stiftung. Between the years 1987 and 2000, Dr. Rüttgers was a member of the German Federal Parliament and from 1994-1998, he served as Federal Minister of Education, Science, Research and Technology in Chancellor Helmut Kohl’ cabinet. He was also a Member of the State Parliament (Landtag) of North Rhine-Westphalia from 2000 to 2012 and Prime Minister of that state from 2005 – 2010. Dr. Rüttgers is currently working as an attorney and Political Science lecturer at the University of Bonn.

Together with his colleagues from France, Italy and Britain, Jürgen Rüttgers had signed, in May 1998, the “Sorbonne Declaration,” by which what was later called “Bologna Process” was triggered. In his keynote speech, Dr. Rüttgers provided the audience with an “inside look” into the considerations which led to the drafting and signing of the Sorbonne Declaration; he also offered insight into the primary ideas and values behind its initiation.

Rüttgers explained that the Bologna Process should be seen in a broader context: In the 1990s, there was a growing awareness in Germany and many other European countries that national higher education systems had to be adapted to the challenges of the 21st century (such as globalization as well as the emergence of knowledge-based society and mass universities) without bowing down to the dictatorship of “total economization”. The Sorbonne Declaration, he said, was meant to prompt – and indeed prompted – the largest reform at the higher education level since the “Humboldtian University”. However, Rüttgers added, although Humboldt’s elitist university model “is dead, the Humboldtian educational ideal, the ideal of free self-education, remains alive.”

Referring to his long-held call for a „privileged partnership“ between the European Union and Israel, Rüttgers strongly advocated the opening of the European Higher Education Area to Israel and vice versa: „I would be very happy if we – Israel, Europe and the West a whole – could jointly develop, on the basis of inalienable Human Rights, a common system of higher education for the 21st century, by which every person, independently of his or her skin colour, religion and origin, is given a chance to be optimally educated and trained.”

First Panel: Europe and the Bologna Process: An Initiation or Response?

Prof. Pavel Zgaga is professor of philosophy of education at the University of Ljubljana. In the 1990s, Prof. Zgaga served as Slovenia’s State Secretary of Higher Education and Minister of Education and Sport. In this capacity, Prof. Zgaga signed the Bologna Declaration in 1999. In his presentation, Prof. Zgaga discussed the “Global Strategy” of the Bologna Process, a theme which is crucial to an understanding of the reform’s implications for countries outside the scope of the EU. Prof. Zgaga began his presentation with a brief historical background to the Bologna Process, describing a number of areas which had a direct impact on its initiation. He referred to global competition in the field of higher education which significantly influenced the decision to set the Bologna Process in motion.

Prof. Melita Kovacevic is Vice Dean for Research and Technology at the University of Zagreb and currently also serves as Vice Chair of the European University Association’s Council for Doctoral Studies. Prof. Kovacevic presented a “kaleidoscopic” view of the Bologna Process, discussing its myriad facets and implications. Prof. Kovacevic began by discussing Bologna’s past; describing the important impact globalization has had on higher education. Specifically, Prof. Kovacevic referred to the manner in which globalization has advanced the need to promote the advancement of a knowledge-based society in both developed and developing nations. As a result, higher education systems have an important and strategic role to play in the contemporary globalized world.

Prof. Kovacevic also discussed the primary goals and objectives of the Bologna Process which include student and staff mobility, the relevance of the labor market in the field of higher education as well as the increasing focus on quality assurance. She continued her presentation with a concrete example of Bologna’s impact on a national higher education system by evoking the Croatian case. Prof. Kovacevic provided an overview of the various transformations which were made at both the national and institutional levels in Croatia in order to implement the various Bologna reforms after the Bologna Declaration was signed in 2001. She concluded her presentation with a look at the future. As new global challenges develop and new issues and priorities arise in the field of higher education, Prof. Kovacevic explained that the Bologna Process will undoubtedly continue to transform itself.

Prof. Joel Feigen is Professor of statistics and Senior Executive Vice President of the Technion Israel Institute of Technology. Prof. Feigen’s presentation focused on internationalization in the field of higher education and its manifestation in the Israeli context. In particular, Prof. Feigen discussed the recent internationalization strategy of the Technion Israel Institute of Technology by presenting the upcoming Jacobs Technion-Cornell Innovation Institute. The program aims to offer interdisciplinary joint degree programs between Cornell University and the Technion, promoting mobility and cooperation between Israel and the United States. Alongside implications for internationalization, this type of program also relates to the link between higher education and the labour market and in particular to the role of higher education institutions in ensuring the employability of students. The program is viewed as having great potential for the diversification of the High-Tech industry with the idea that universities can serve as the catalyst for this purpose. Prof. Feigen outlined the advantages foreseen of such an international cooperation for the city of New York City, the State of Israel and the Technion Institute itself.

Second Panel: The Bologna Process and Implications for the Israeli Context

The conference’s second panel “The Bologna Process and Implications for the Israeli Context”, was aimed at prompting discussion among the guest speakers as well as the conference participants, on various issues related to the Bologna Process and its implications for the Israeli context in particular. The panel was chaired by Mr. Moshe Amir and included Prof. Pavel Zgaga, Prof. Melita Kovecevic, Prof. Joel Feigen and Prof. Sarah Guri-Rosenblit. The panel sparked an animated discussion surrounding a number of central questions related to the Bologna Process' place in the Israeli higher education system.

An important theme which arose dealt with the strategy Israel should take with regards to the European Higher Education Area (EHEA): how should Israel engage the EHEA? Should this effort be made at policy level or should the institutions themselves take on this role? The fact that the Israeli response to Bologna thus far has been initiated by institutions themselves as opposed to policy makers or government representatives was discussed. Prof. Sarah Guri-Rosenblit explained that significant changes needed to take place in the Israeli higher education system, changes which will require policy level support. Prof. Melita Kovacevic provided the Croatian example and described the manner in which the Bologna Process was initiated by a top-down process; as the declaration was signed early on by policy makers. Nevertheless, a number of internationalization initiatives taking place in the Croatian higher education system are initiated by institutions/programs themselves. According to Prof. Kovacevic, both top-town and bottom-up processes can effectively work together. Prof. Zgaga presented his view that a response from the bottom-up is to be preferred.

Another issue which was discussed during the panel emerged from an audience question related to the role of higher education in bringing cultures closer together and to the potential in the Israeli context, of promoting peace in the region. All panel speakers spoke of the contribution of higher education institutions in the promotion and strengthening of mutual understanding between peoples of different cultures. Prof. Zgaga spoke about the significant role the university has to play in society and in strengthening international “people to people” ties. Prof. Feigen presented concrete examples of programmes initiated in the Technion which aim to provide equal opportunities to the Palestinian minority in Israel.

The conference was attended by a wide range of stakeholders in the Israeli higher education system including management and administrative staff, faculty and students from numerous Israeli colleges and universities. Representatives from the Ministry of Education as well as the Council for Higher Education also attended. The conference provided participants with a historical understanding of the Bologna Process and its initiation, as well as insight into its implementation and implications in national higher education systems. The vibrant discussion which took place regarding Israel's place in the European Higher Education Area speaks to the high level of interest in the Israeli higher education sphere on all matters related to the Bologna Process. 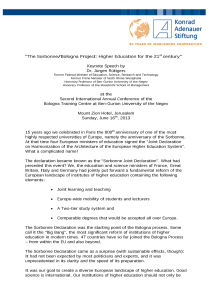 Europe Upheavals and Change in the Middle East and North Africa