The Konrad-Adenauer-Stiftung received the Ring of Christian Democratic Students (RCDS) from 19 to 23 August 2017 for a study and information program in Israel.
December 5, 2017 Ordering Information

The RCDS-Group started their program by visiting the Yitzhak Rabin Center, which also houses the Israeli Museum. The exhibit showcases Yitzhak Rabin's personal life as well as the history of Israel. The exhibition is illustrated by key historical events such as the birth of Tel Aviv, the founding of the state of Israel, early wars, waves of immigration, and economic and cultural developments. The visit to the museum gave the students a first insight into the complexity of the history and society of Israel. Furthermore, it laid the first foundations for a deeper and more in-depth discussion about Israel during the delegation’s trip.

Israel as a Multicultural and Complex Society - An Introduction, Adi Kantor, INSS - The Institute for National Security Studies

After a brief keynote address on Israeli society, which was led by Adi Kantor, Research Associate in INSS, the group discussed a possible definition for the cultural concept and the cultural melting pot in Israel. The formation of an identity is of great importance in a multi-layered society such as Israel, a country in which different groups and religions live together.

The difficulties in managing the Israeli-Palestinian dialogue were highlighted with an introductory role-playing game, in which students took different positions and perspectives within the Israeli-Palestinian conflict. The role-playing game was followed by a seminar for strategies and conflict resolution, which was led by Arik Segal. Arik Segal explained that professional conflict management requires the consideration of psychological, sociological and political aspects on different general levels.

Briefing about the current political situation in Israel, Dr. Michael Borchard, Head of the KAS Office in Israel

Following an introductory presentation about the work of the KAS office in Israel, Dr. Michael Borchard gave a lecture on the political situation in Israel: He emphasized on the unique German-Israeli relationship, which is characterized by a very high appreciation of Israelis for Germany; however, it should be noted that the younger generations of both countries are drifting more and more a part. In Israel, for example, observations indicate that the youth is increasingly more nationalistic, militaristic and religious. The German youth, on the other hand, is leaving these positions more and more behind.

Meeting with members of the Manof Forum

On the evening of the first day, the RCDS students met with members of the Manof Forum, the young intellectual forum of the Likud. The Manof Forum strives on creating and strengthening links between moderately liberal and nationalistic ideas within the Likud. After a brief presentation of the two sides and their positions and tasks, the participants of the event moved to discussions in small groups about different matters such as political party structures in Germany and Israel, education, German-Israeli relations, and economic aspects of both countries, were discoursed.

Following an introduction of the mission statement of the AHK in Israel, which is to be a bi-national institution that supports activities in both countries and as a "cultural translator", Gregor Schlosser, project manager of the AHK, referred to the founding of the BETATEC label. This helped to better understand the Israeli startup boom, which has evolved from an agricultural nation into a high-tech location that includes some 6,000 start-ups. In order to explain the "startup miracle" in Israel, Mr. Schlosser described the characteristics of Israel as an immigration country. Israel is a country in which many academics immigrate to and choose the path of self-employment, due to the limited labor market, the good quality of the universities, and the professional role of the military.

Regional Trends and the Role of Israel in the Region, Dr. Amichai Magen, Lauder School of Government, Diploma and Strategy at the Interdisciplinary Center (IDC)

At the campus of Herzliya, Dr. Amichai Magen, one of the world's leading experts on counter-terrorism, lectured about regional trends and the position of Israel in the Middle East. Taking a historical perspective, he presented Israel's need for security and the role of security and security policy in Israel.

Israel and its past: A look into history, Joachim Rother, Deputy Head KAS Office Israel

Dr. Joachim Rother, deputy head of the KAS office in Israel, focused on the biblical and Old Testament history of Israel and particularly of Jerusalem. The group explored how Jerusalem grew to the home of the three monotheistic world religions. Dr. Rother’s explanation began with the Old Testament period, the northern and the following southern kingdoms of Israel, the Babylonian exile and the time of Jesus Christ. Also, it included the explanation of the etymological origins of relevant biblical terms and names. The excursion was concluded by the idea of the Crusades and the relationship between theology and violence.

The former Israeli Ambassador to the United Nations, Ron Prosor, spoke primarily about his work in the UN. He explained the structures and institutions of the UN, the rotation process and system as well as the main and subsidiary organs of the United Nations. In a lively exchange with the participants, further discussions were held on Israeli international and diplomatic relations as well as its membership in the UN.

Tour through the old city, Dr. Michael Borchard, Head of the KAS Office in Israel

Dr. Michael Borchard gave the RCDS-Group a historical city tour in Jerusalem. Starting from the German Colony the tour went along the former railway line to the First Station and onwards to the Menachem Begin Institute. The opportunity was given to view the walls of the old city to learn about the historical background of the Montefiore windmill, the King David Hotel, the breakthrough of the single city wall, as well as about the ownership rights of the individual buildings. After the walk through the Kidron Valley up to the Zion Gate and the Benedictine Abbey Dormitio, the students were lead to the significantly older David's grave and to the cenacle. Dr. Borchard outlined the role of the Temple Mount for Christians, Jews, and Muslims, before seeking a vantage point on the Wailing Wall to discuss conflict potentials and different designations of the Wall. The visit to the Church of the Redeemer offered an opportunity to talk about the archeological findings of Prof. Dr. Dieter Vieweger; these relate to the earlier course of the city wall. The tour of the old city was concluded at the church of Holy Sepulcher.

As part of a guided tour, the RCDS group visited Yad Vashem, which was founded in 1953 as a memorial site and later expanded into a museum. Today, it also includes a research institute, a school as well as the garden of the "Righteous among the Nations". The visit ended with a personal exploration of the museum; where individual impressions were discussed in a subsequent reflection.

A blessing in disguise? Diversity in Jerusalem through facts and trends, Lior Schillat, Director of the Jerusalem Institute for Policy Research

Over lunch, Lior Schillat, head of the Jerusalem Institute for Policy Research, presented the students with facts and trends on demography, settlement policy, education, employment, and citizenship applications; whereby his primary focus was on Jerusalem, its development, ultra-Orthodox Judaism, and the Arab population.

Central Issues in Jerusalem as the Key to the State of Israel, Koby Frig, Co-Founder of Hitorerut, Member of the Municipal Cultural Committee

Hitorerut BeYerushalaim is a movement of young Jerusalemites that center on the development of the city and stand up for their future. Since its founding five years ago, it has been based on the understanding that direct trade is necessary to preserve the character of Jerusalem, keep the city young, and stop the steady exodus of the young population from Jerusalem. Koby Frig is one of the co-founders of the Hitorerut movement. In a personal conversation followed by a guided tour, the RCDS group gained insights into the cultural policy projects of the Jerusalem municipal politics. 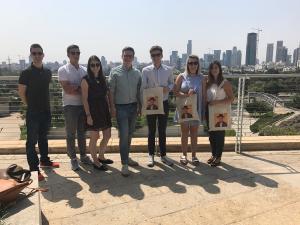 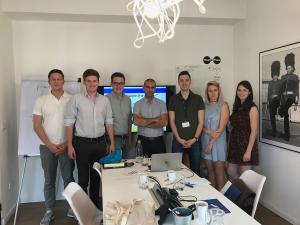 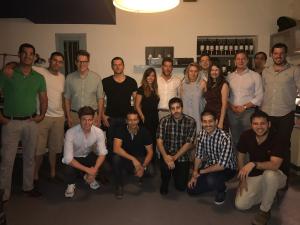 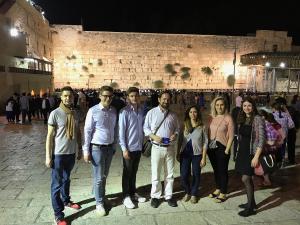 Tour in the Old City with Dr. Michael Borchard