Lessons from other conflicts

The Konrad-Adenauer-Foundation in Israel organised together with the Geneva Initiative the conference "Lessons from other conflicts". The event focused on the relevance of comparing the Israeli-Palestinian conflict with other conflict worldwide in order to learn how they are being dealt with and to draw the conclusions for the region.
November 19, 2017 Ordering Information

The conference was opened by Dr. Michael Borchard, the Director of KAS Office in Israel. Before he started his speech, he thanked the Geneva Initiative for the last years of help and friendship. Referring to the topic, he stressed that only a two-state-solution is possible. Borchard admitted to have a rather pessimistic view on the situation at the moment, because on the one hand there are more problems e.g. the topics Gaza, settlements or refugees, which make it harder to find a solution. On the other hand many citizens from both sides lost their hope and are ready to cope with the situation as it is. Nevertheless he believes that there is always a solution if a political will, supported by the public will, exists. At the end he referred to the topic of the conference and claimed the necessity to learn from other conflicts: comparing it to others while not forgetting the uniqueness. He gave the examples of the bloody war between France and Germany, which developed into a unique relationship, and the peaceful revolution of the divided Germany.

Mr. Gadi Baltiansky, who is the Director General of the Geneva Initiative, welcomed and introduced the participants. Moreover he agreed with Dr. Michael Borchard on the situation and added that many do not believe that reconciliation could happen. Commenting on this statement and creating some hope, he stressed that no one had expected the fall of the Berlin Wall as well.

Ms. Ariel Heifetz-Knobel, who is a Northern Ireland expert, a Conflict Management Practitioner and Consultant, presented the conflict in Northern Ireland. First of all, she emphasized that she does not believe in “copy and paste solutions”. Concerning the Northern Ireland conflict she stressed that even if they were not able to gain Independence, it was possible to satisfy the underlying needs of the population which had led to violence in the past. In her opinion that is one reason why the situation eased there and why the conflict is nonviolent now. At the end of her speech, she talked about insights of conflict transformation. According to her it is important to create alternative ways to meet the needs fuelling violence. Furthermore, the identity preservation itself is an issue for negotiation. She ended with the fact, that peace is a process and that negotiations do not end after the deal was made.

The Director of the Peace Research Institute Oslo Dr. Harry Tzimitras presented the situation of Cyprus. According to him one of the main problems is the non-existent interaction between both sides, which might be a result of the lack of knowledge and the minimum interest for each other. This statement is verified by the fact that for example 83% of the students of the Greek part never went to the North. Another point he stressed was the deeply rooted mistrust. Moreover he highlighted that both sides try to fight for a solution, which they just define differently. The conclusion Tzimitras drew out of it, was firstly that the “copy-and-paste” method does not work, because the uniqueness of each conflict should not be neglected. Secondly, a political will for reconciliation is important, which just works with a good leadership. Finally, the timing is crucial, because two leaders who like to negotiate a solution are needed.

Prof. Zohar Kampf, who is an associate Professor of language and communication, explained the theme of peace communication and how “friendly gestures can help to bring peace into the world”. Concerning this, he presented parts of his ongoing research project “Performing Peace: understanding the conditions for achieving (re-)conciliatory consequences of discursive actions”. He concentrated on identifying the conditions and contexts under which solidarity-oriented actions enhance relationships between nations in global affairs. While doing so, he pointed out the importance of politeness gestures, such as handshaking or thanking someone, between diplomats.

Dr. Yossi Beilin, who is the former Israeli Minister of Justice, the Initiator of the Oslo process, the Beilin-Abu-Mazen understandings and the Geneva Initiative, commented on the other presentations and the current situation in Israel. In his opinion we do not learn enough from each other. Even if the conflicts are unique, the contour of the problems and solutions are similar. Relating to this Beilin stressed that the cultural differences should not keep people from learning from each other. Moreover he highlighted the aspect that reconciliation is more successful if peace is supported by the population (bottom-up), than “top-down”, even though a good leader is still the most important one. He ended his talk with emphasizing that everyone wants peace if it does not come with a price. That is why the most important question is whether you are ready to give something for peace. 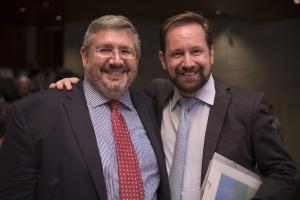 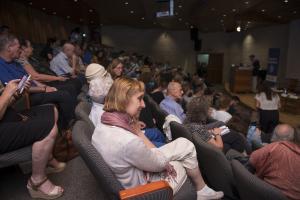 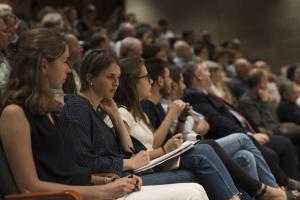 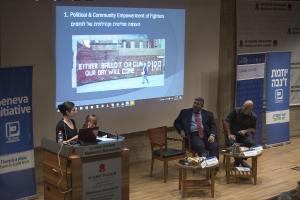 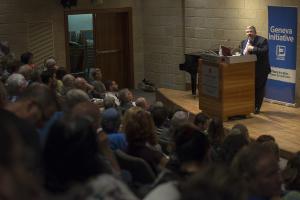