On May 31, 2015 the European Forum of the Hebrew University, in cooperation with the Konrad-Adenauer-Stiftung organized a simulation of the UN Security Council and the North Atlantic Council of NATO on an escalation of the crisis in Ukraine.
August 2, 2015 Ordering Information

In the run-up to the simulation, some NATO members’ intelligence services had shared classified reports about possible plans of action by the Russian side in East and South Ukraine, the Crimea and Transnistria. In this situation, the NAC convened in order to find a solution or at least a response to the possible escalation.

The UN Secretary General had also been informed about the situation, and decided to call for an immediate meeting of the United Nations Security Council in order to prevent the conflict from escalating.

Both in the corridors of the United Nations building in New-York, as well as in NATO HQ in Brussels, Ukraine was represented. The Ukrainian delegations were tasked with influencing the ongoing negotiations in the committees.

After 7 hours of intense diplomatic negotiations, the students finally agreed on a resolution which, they believed, was able to prevent an escalation in the area whilst safeguarding the national interests of all the powers around the table.

1.Calls upon all sides to abide by international law.

2.Calls both sides to honor all the agreements signed until now, military agreements and others.

3.Calls Russia to not increase its number of soldiers in Crimea - Based on pre-conflict agreements - under no circumstance, except Ukrainian aggression against civilian population in the Crimea peninsula.

4.Calls upon Ukraine to boost the autonomous status of Crimea and grant more autonomy to parts of eastern Ukraine;

5.Calls upon Ukraine to improve minority rights, and to improve the representation of minorities at the national, political, economic, cultural and social stage.

6.Calls for the immediate demilitarization of Lugansk and Donbass, assured by a U.N peacekeeping forces approved by the Security Council led by Egypt and coalition of un-aligned countries.

7.Recommends the UNHRC to discuss a special Aid package to be sent to the region, consisting of basic necessities such as: food, clean water, Medical assistance and housing solutions. The exact details will decided by the council.

8.Calls for the cancellation of the annexation of Crimea by Russia.

9.Recommends the question of Crimea will be discussed within the next ten years by a U.N committee to be convened forthwith of Russian and Ukrainian delegates, with a possibility of holding a referendum in mind.

10.Calls all the sides involved to respect internationally recognized borders.

The simulation workshop gave the Israeli students – possible decision makers of tomorrow – a rare inside-look into the workings of the EU, NATO and the United Nations Security Council, where their powers lie and the ways and procedures to deal with such a crisis. It also gave them the opportunity to study the system in depth and broaden the scope of their European studies. 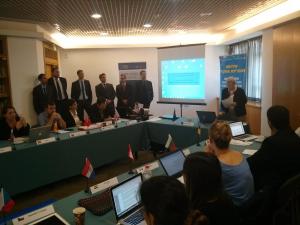 simulation of the UN Security Council and the North Atlantic Council of NATO on an escalation of the crisis in Ukraine.