An event of our EU-Project "Partners for Regional Leadership"

Our EU-Project “Partners for Regional Leadership” (PRL) started its second round in 2014. The Israeli part of the tri-national program held a workshop concerning identity, for 15 to 17-year old students, on the 25th and 26th of December. The second workshop weekend (23rd – 24th of January 2015) carried out with the Israeli teenagers, put its focus on different forms of leadership.
February 8, 2015 Ordering Information

The 67 participants from Dror School, Sha’ar Hanegev High School and Hebrew Reali School in Haifa came together with their teachers, the program’s country-coordinator, Michael Frohlich, and the responsible project manager of KAS, Stefan Wolfrum, in Ashkelon.

After their arrival, students and teachers started their day with an Icebreaker on the accommodation’s sunny terrace with a view on the Mediterranean. They played a match of live chess by moving themselves as players on the self-made field. Afterwards, they discussed which was more important, the game itself and the joint activity, or a victory in the end.

Through a collection of video clips, the students were introduced to the subject of different leadership styles. The questions of what makes a great leader and what he has to give up for his success were brought up and subsequently discussed in two groups, led by the teachers Hesh Rabinowitz and Ohad Davidow.

After lunch break, the program started in its second round. Dor Toker and Amir Elad offered a lot of input by holding a presentation, which addressed details of different forms of leadership and explained them using examples. After that, the students formed groups again. They got to know each other better by introducing themselves through a personal photo, particularly important to them. Also, they discussed conflicts which often occur in their schools and looked for possibilities to solve them.

Meanwhile, the program’s graduates worked on reprocessing their experiences from last year. They prepared a presentation explaining to their successors the meaning of PRL and giving them an idea of how individual leadership looks like in everyday life. In order to conclude, the new students were given the possibility to ask questions about the meetings to come. Here, as well as throughout the rest of the weekend, it became clear that the Israelis are especially looking forward to meeting and building up friendships with the students from the Palestinian Territories and Jordan.

After the eagerly awaited dinner, it was time for the students to get to know each other even better, in a relaxed atmosphere. Some started a choreographed dance party, while others played games or the guitar.

The next day, everyone was recharged and motivated. The students separated into groups and studied texts about important leaders of world history. They filtered out key elements which were later presented to their fellow students.

After a short coffee break, the weekend’s conclusion started. The experienced students had prepared a game that led everyone to the beach. Four groups were established and each was secretly assigned a different leadership style. According to the features of each specific leadership style, the leader had to bring its group to build the Azrieli towers of Tel Aviv, without letting anyone know he was the appointed leader. So while there was much yelling to be heard in the “Dictator’s group”, the “Democracy group” decided everything on the base of equal voting. Through this, the students were able to apply the weekend’s theoretical knowledge to practice and analyze it.

Overall, the students were very content with the weekend. Some would have preferred more exercises asking for self-generated initiative instead of giving theoretical input. Throughout the whole weekend, the students communicated the wish to soon meet the Arab participants of the Palestinian and Jordanian schools. This meeting will finally happen by the end of March, when everyone will hold a joint workshop in Israel. 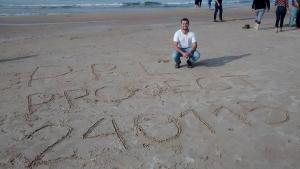 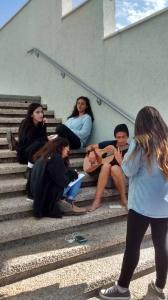 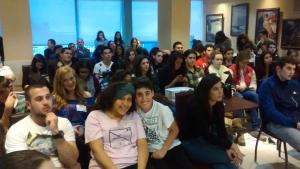