Perspectives on the Future of German-Israeli Relations

by Eva Keeren Caro
On the occasion of the current jubilee year, KAS Israel and Mishkenot Sha’ananim/Konrad Adenauer Conference Center is co-hosting the conference series “GerMANIA – 50 Years of Diplomatic Relations”, which focuses on the special partnership between Israel and Germany, established half a century ago.
September 8, 2015 Ordering Information

The second event of the series, which took place on September 7th, focused on the future chances and obstacles for the diplomatic relations, sought to provide perspectives from both sides, and addressed the question: How can the bilateral relationship be perpetuated and enhanced? The stage was given to renowned experts in the field: Former German Ambassador in Israel Dr. Dr. (h.c.) Harald Kindermann-“Ha-Shagrirah”, former goodwill ambassador Melody Sucharewicz, Tal Gat, who served as head of Head of the Public Affairs Department in the Israeli Embassy in Berlin from 2011 until 2014, as well as Dr. Gil Yaron, German-Israeli journalist and analyst, who chaired the discussion with wit and savviness.

In his opening remarks, KAS Israel head of office Dr. Michael Borchard stressed that the German-Israeli relations are “anything, but a given”. Especially in light of sociological and demographic trends, which can be observed within both societies.

Amb. Dr. Harald Kindermann called the partnership very strong, for his generation Israel was even viewed as a “born partner”. However, he highlighted the dispute over the recent deal with Iran as a “major break” for the current diplomatic relations. Tal Gat responded to this observation by adding that Israel’s discontent was not specifically directed against Germany, but rather against the powers which negotiated the deal, as a whole.

Melody Sucharewicz referred to the German-Israeli partnership as an “unprecedented success story”, facilitated by numerous synergies. At the same time, she stated, it was facing the challenge of coping with a gap between close relations on a government level, and declining understanding between the two societies. “We cannot lose the public!”, she warned. A negative, emotional image of Israel prevailed among German youth, also created by biased school books and lack of knowledge about Israel’s “other” facets (e.g. as the world’s innovation powerhouse). Tal Gat added that the image of Israel by Germans was vastly perceived through a lens of religion, military and nationality issues, fields which trigger negative connotations among German society, rather than through topics of mutual value.

Responding to the question if a change had occurred in Germany’s official position towards the Israeli government, Kindermann argued that Germany’s focus had indeed shifted in the past few years, but due to other fundamental challenges on a foreign policy level. The Russian/Ukrainian war and the European debt crisis had taken stage and caught the main attention of diplomats and governments, at the expense of other regions. Due to this shift, interest in Israel has faded. However, he also emphasized that Israel remains a valuable partner for Germany, which shares the same democratic values and faces a common challenge: to cope with an increasingly undemocratic environment in the region. 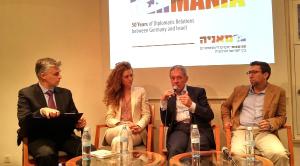 Striving for Security in an Insecure World