Seminar with the Manof Forum

Observations of the political landscape of Israel indicate that in the long run the Israeli public opinion and the political decision-making process will be significantly influenced by political powers of the center and right of the center. However, this camp does not form a closed unit. It consists of political parties such as Kadima, Israel Beiteinu, Yesh Atid, HaTnua and HaBayit Yehudit. However, the Likud, the oldest and biggest party of the conservative spectrum, takes the center stage.
May 10, 2013 Ordering Information 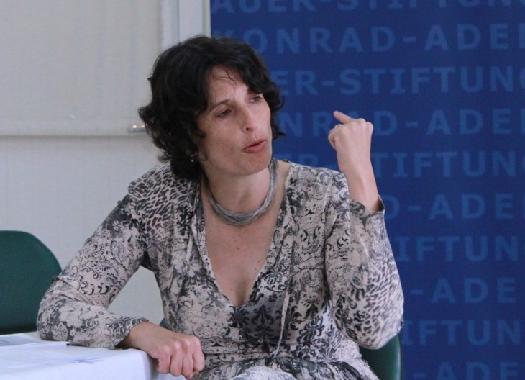 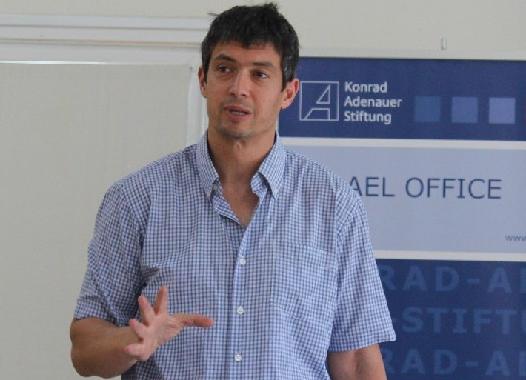 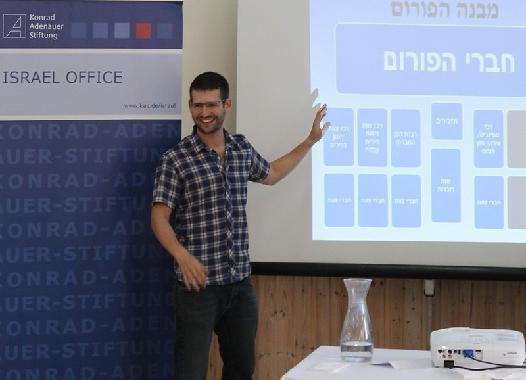 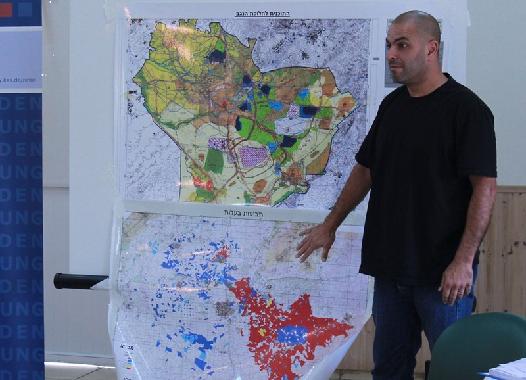 KAS Israel / Nadine Mensel
Benny Tfillin spoke to the group about the situation of the Bedouins in the Negev (photo: Nadine Mensel) 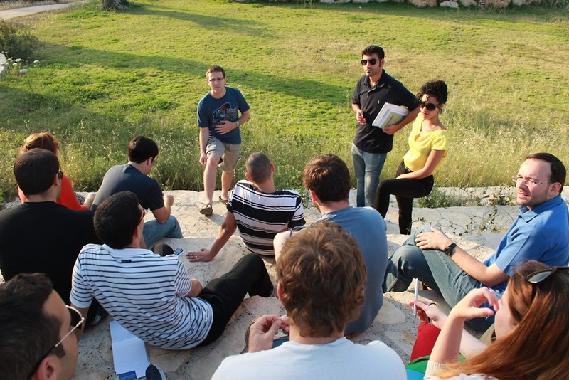 Within the Likud, the moderate and liberal-oriented forces intend to become an audible voice. Therefore, they have founded the “Manof Forum” in the fall 2011. Items on the Forum’s agenda include the wish to revitalize the discourse in the Likud and in the public with regard to socio-economic questions and a social market economy. More generally speaking, the Forum’s members aim to develop strategies how young political activists are to be enabled to gain more ground within the Likud party.

To support this goal, but to also focus on topics like intraparty democracy and pluralism, KAS Israel and the Manof Forum conducted a seminar on the promotion of the politically active youth on May 3-4, 2013.

Related to the consolidation of Manof as a liberal think tank within the Likud, the seminar participants had the opportunity to discuss strategies and future projects. Therefore, they debated several political issues in groups, prepared presentations and held a final plenary session on the second day of the seminar, in which the activists agreed on the main findings and outlined their next steps.

Regarding specific policies the Forum wants to tackle, the participants received input from three experts: Meirav Arlozorov, journalist at the business magazine “The Marker”, Dr. Yoaz Hendel, columnist and media consultant, and Benny Tfillin, government adviser on settlement issues of the Bedouin in the Negev.

Meirav Arlozorov remarked in her presentation on the obstacles in the Israeli economy to allow more competition. This situation did not only develop because of political failures of the past and the position of the trade unions as veto players. Another factor was the highly concentrated market in economic key industries. Here, it would take action to break up monopolies and oligopolies, as well as to comply with existing anti-trust guidelines and legislation.

Dr. Yoaz Hendel, former media adviser to Prime Minister Netanyahu and currently columnist for the daily newspaper “Yediot Ahronot”, raised the question whether the political left and right in Israel had committed themselves or were assigned to specific topics. On the one hand, this concerns the discourse on human rights and democracy, which was mainly in the realm of the left as the speaker explained. On the other hand, the right was more concerned with Zionism and national questions. However, Dr. Hendel sees none of the camps liberated from the discussion of other topics. Thus, the Likud must actively participate in the discourse on human rights and the development of civil society in Israel, and put forward its own ideas. In addition, this would also apply to the attitude toward the Israeli-Palestinian conflict.

The handling of the Bedouin population in the Negev is a much-debated domestic political issue. At its core is the creation of permanent housing for the oftentimes nomadically living group of the Bedouin in the Negev (approximately 100,000 people). One of the plans discussed by the Government envisages establishing permanent settlements and to assign land use rights to the people. However, the legal aspects of land use rights and legal traditions, are heavily disputed and the cause of conflict. The government adviser Benny Tfillin gave an insight into the matter, using comprehensive maps. Together with the group he elaborated on the issue in depth and became involved in a vivid discussion and an intense exchange of thoughts.

A third seminar unit dealt with the task to strengthen the Manof Forum institutionally and to enable its members to influence the policy-shaping and decision-making process. Eli Hazan from the “Israel Center for Political Training” (ICPT), one of the outstanding professionals in the field of political communication and an expert on the Israeli legislative procedures, was responsible for this section. Tailored to the needs of the participants, some of them had already worked as parliamentary assistants, Eli Hazan emphasized on the Knesset’s mechanisms and what matters in the drafting of legislation. In addition, he provided tools appropriate for procedures related to the pre-parliamentary space. Furthermore, the members of Manof were particularly interested in understanding the workings of Knesset committees and discussing strategies to position Manof as a liberal platform within the Likud.

One of the most important results of this seminar has been the intensified political dialogue towards the Likud with the support of KAS Israel. Gal Bareket, Manof’s co-secretary, pointed out that the connections of the Likud to German organizations and Germany in general had been handled rather cautiously in the past. Nowadays though, the younger generation had developed a more optimistic stance in that respect and there was even the desire to deepen the political cooperation with German partners. Therefore, KAS Israel received many thanks for its role as a mediator and facilitator.