Decision Making in the German Bundestag

The Simulation Workshop, directed by Tamir Sinai, has been organized by the Konrad-Adenauer-Stiftung and the Helmut Kohl Institute for European Studies / European Forum at the Hebrew University. This special exercise brought together graduate students from diverse academic backgrounds who specialize in European Studies.
May 8, 2013 Ordering Information 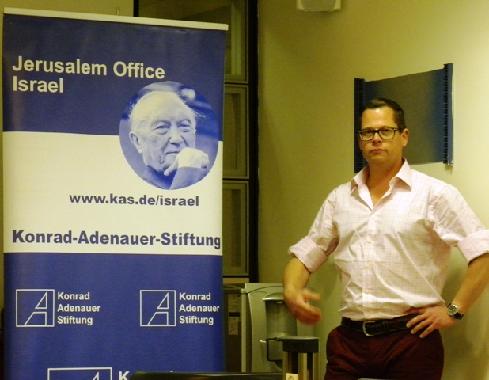 On the 2nd of May 2013, 12 students of the European Forum participated in a simulation of the legislative procedures in the German Bundestag. The simulation followed a month long online tutorial in which the students studied in theory how a bill is passed into law in the Bundestag.

On the day, the students were given the opportunity to put that knowledge into practice and actually draft, discuss, debate, amend and vote on a decision in the Bundestag. The proposed decision had been introduced by the SPD party group and asked the Bundestag to appeal to the Federal Constitutional Court to ban the National Democratic Party of Germany, the NPD - a subject matter very much on the agenda at the moment in Germany.

The simulation started with the students representing the different parties meeting in an early effort to decide on “party lines” but it became obvious from the start that party discipline in this matter might not be enforceable.

And so, the proposed decision was read for the first time. The parties declared their positions and moved the proposal to the Interior committee to start the discussion in earnest. For hours the parliamentarians heatedly debated the implications of such a measure in all its facets - as had already become clear in the morning, positions were not always within the strict confines of party lines.

Discussions swayed back and forth but in general it looked like the proposed decision was bound to be rejected. Whilst all agreed on the unconstitutional character and actions of the NPD, the move to the Constitutional Court, alongside the Bundesrat, which had already declared it would push forward such an appeal, the opinions on the chances for a successful outcome differed.

A compromise proposal was formulated by the other parliamentary groups and, as the decision went on to the second debate and the proposal of the SPD was rejected (by a narrow majority of the CDU/CSU, FDP and Greens), and this compromise was accepted with only one abstention.

During the de-briefing session the students reflected on what had transpired and elaborated on the distinct features of German legislation, which they had studied in theory and experienced in practice. The debates had highlighted this fundamental question for every democracy: how to deal with parties that actively oppose and undermine the very system guaranteeing that freedom. The deliberations had reflected the current debate in the Bundestag and stressed the relevance of that discussion also for Israeli students.

The simulation workshop gave the Israeli students – possible decision makers of tomorrow – the opportunity to study in depth how the parliamentary democratic system works in Germany today and broaden the scope of their European studies.