Southeastern Enlargement of the EU

Simulation-Workshop at the Hebrew University

The subject of enlargement of the European Union is a difficult and, in times of austerity, also a very controversial one. Furthermore, enlargements so far have been conducted according to different rules and procedures at different times.
July 5, 2012 Ordering Information 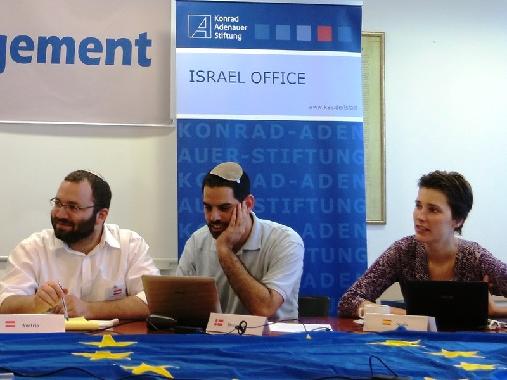 Representatives of the EU Member Countries are prepared to hear the applicants' rationales. Photo: Motje Seidler 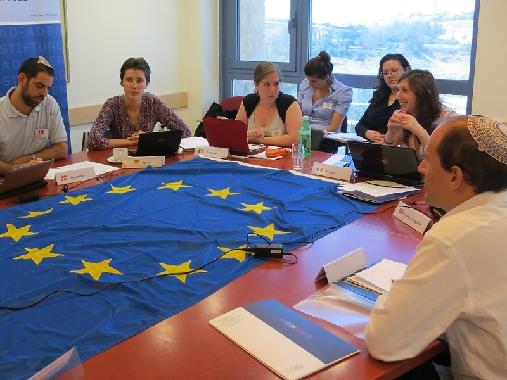 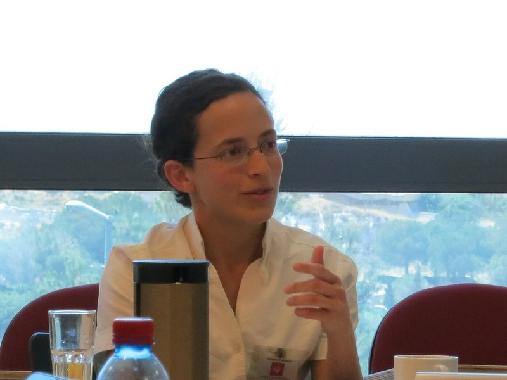 Negotiations with Serbia? The students raised the same questions like the EU Council. Photo: Motje Seidler 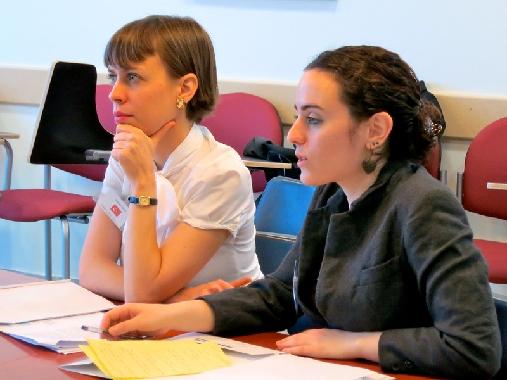 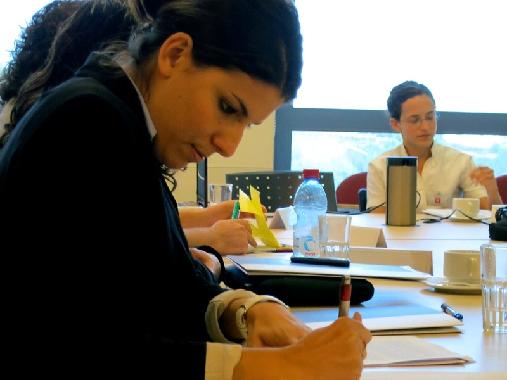 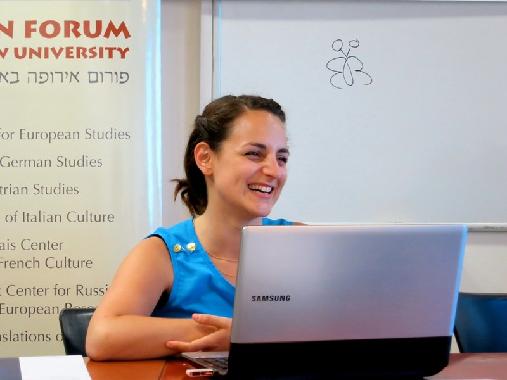 Tough negotiations, but there is a fun side as well. Photo: Motje Seidler

On 5 to 8 June 2012, twenty students of the European Forum at the Hebrew University (http://www.ef.huji.ac.il/), along with fellow students from Universities in the United Kingdom and Germany, took on the challenge of a further round of enlargement, opening and conducting accession-negotiations with Serbia and Turkey. The students became Foreign Ministers in the Council, Members of the European Parliament, EU Commissioners or heads of delegation of the applicant and later candidate states of Serbia and Turkey.

The simulation covered the whole process of enlargement, from the handing in of actual applications, the initial two-pronged checks, followed by the opening of accession negotiations and the eventual signing of accession treaties.

The students from Israel and Europe were prepared for the subject and their respective roles in the simulation in guided research. They received role profiles, background information, forms and the like. The materials covered their position on enlargement in general and on the two applicants in particular.

The research was tutored by Tamir Sinai of the College of International Security Studies at the Marshall Center in Garmisch. The event itself took place at the Hebrew University.

The simulation was opened by Nadine Mensel, Deputy Country Director of Konrad-Adenauer-Stiftung Israel, and representatives from the European Forum.

The simulation began with the opening ceremony and statements by Shir Gideon, President of the European Commission, who, together with her colleague from Germany, Anna Naab, welcomed the expression of willingness of the potential candidates, stressing the importance of the enlargement process to a Europe of peace, stability and prosperity.

The representatives of Serbia and Turkey then handed in their applications to the Council, which scrutinized the minimal requirements of “Europeanness” and “Democracy.” In these first discussions it became clear that the day would not be an easy one as multiple reservations were aired already at this early stage.

The Council nevertheless decided on accepting both as applicants, informed the EP and tasked the Commission with drafting Opinions on the applicants that would serve the Union as a framework for possible negotiations. In Parliament, the Committee for Foreign Relations started its work, well knowing that their role would be limited in this policy field if they didn’t continuously push for a larger say on the matter. Throughout the process the Members of the European Parliament had to find a way to make a positive contribution to the negotiation process which was about to start. The aim was to avoid having to be called upon to give their assent without having influenced the issue beforehand.

The Commission meanwhile screened the candidates, a process of mutual getting-to-know the other side, in which the Commission and candidates identified and clarified the most prominent issues that had to be resolved before accession could be possible.

The Council, based on the opinion of the Commission (fulfilment of the Copenhagen political Criteria by Serbia and Turkey), then decided unanimously to open negotiations.

At this stage the EU inaugurated an Intergovernmental Conference (IGC) which would include the Council, the Commission and the candidate states. The IGC’s aim was to negotiate accession modalities in the different chapters identified by the Commission and “close the chapters” once agreements on derogation periods and the like were achieved. All these conditions would than be included in accession treaties with the two candidates.

The Commission conducted the negotiations with the candidates together with the Council and determined that negotiations would start with Serbia first. The country, enjoying much support for its membership bid in the Council (as well as in Parliament), found open ears for its significant problems and managed to convince the Commission, the Council and also the EP that it would be able to fulfil the EU’s requirements, even if it meant taking on rigorous transformation programs, especially with regard to the reduction of unemployment, corruption minority rights and environmental protection. The issue of Kosovo at all times cast a shadow over the negotiations. Still, chapters were closed one by one as various aid and advisory programs as well as derogation periods (i.e. free movement of workers) were formulated and agreed upon.

Meanwhile, deliberations in Parliament were going in a different direction. It became clear that the problem would not be Serbia’s accession but, for various reasons, Turkey’s. A majority of MEP's would have preferred a privileged partnership for Turkey instead of full membership from the beginning. But the Turkish delegation, extremely well prepared, tried to put to rest all the existing fears as well as genuine doubts and did its best trying to convince the parliamentarians of the sincerity of their efforts. Still, Turkey's membership was still far from being a closed deal.

Deliberations in the IGC continued, tough negotiations, chapter by chapter went on for hours, challenging the Turkish delegation to the limit. Alas, in the end, accession was not in the cards as further improvement was needed on the part of Turkey.

The Commission and the Council formulated an accession treaty for Serbia, which was then passed on to Parliament for its assent. The ball passed to the MEP's now, and voting on the final document began.

On the conclusion of the negotiations with Serbia and having made remarkable progress with Turkey, this memorable hour was celebrated in festive speeches.

It became clear to all participants that enlargement is a complex process. Further enlargement of the EU is today as dependent on internal reforms, a difficult and painful process, as on the conditions of the candidates.

The role of Parliament remains weak and depends on the Parliament's efforts to carve out a more prominent role for itself.

The Council, safe in the knowledge that it is and will remain the main decision-making body in the process, learned that cooperating with Parliament and the Commission does facilitate a smoother ride in the end. The Commission, professional as usual, found itself faced with the sometimes endless and nationally-motivated bickering and had to use all its diplomatic skills to bring the member states back under the common roof.

All these efforts still did not conclude the enlargement process: ratification in all 27 member states still awaits the candidates and especially the de-facto right of veto given to the French and Austrian electorates (by law any enlargement must pass a referendum), is far from decided yet.

The students agreed that they were given a rare inside-look into the workings of the Union, where its power lies and what the content and procedures of enlargement are and on top of that did have the opportunity to exchange their views and understandings with their fellow students from Europe.

Mr. Sinai is the Exercise Program Manager CTR at the College for International Security Studies at the George C. Marshall Center in Garmisch-Partenkirchen.’’ Contact: tamir.sinai@gmail.com

To the event
The Helmut Kohl Institute for European Studies, The Hebrew University of Jerusalem
More about this topic