Citizenship in Germany and Israel

On March 5, 2013 the Leo Baeck Institute Jerusalem and KAS Israel came together to present the public symposium: Citizenship in Germany and Israel - A comparative retrospective. The event was attended by participants from an international conference marking the 200th Anniversary (1812-2012) of the Prussian Emancipation Edict for the Jews and a broader Israeli audience.
March 12, 2013 Ordering Information

The symposium was introduced by a welcoming speech of Michael Mertes, director of KAS Israel, who acknowledged that this was the first event between his organization and the Leo Baeck Institute (LBI) Jerusalem. He noted that KAS Israel has worked tirelessly on the German-Israeli relationship, that LBI is the world’s leading institute for the study of German-Jewish history, and that tonight’s symposium brought together both missions in an ideal fashion.

Professor Shmuel Feiner from Bar Ilan University/LBI Jerusalem opened the symposium by discussing the 200-year commemoration of the edict aimed to modernize Prussia. He explained that although this law declared all legal resident Jews of Prussia to be citizens, it still took Prussian Jews some two generations to actually enjoy full equal rights. From this, Mr. Feiner explained that we can learn that legal equality needs to be complemented by social acceptance, which in turn depends on how much a state is identified with a specific religion. This past experience may help find answers to Israel’s current situation with its citizens belonging to minorities.

Professor Yfaat Weiss from Hebrew University’s Franz Rosenzweig Minerva Center for German-Jewish Literature and Cultural History touched on the fact of the undeniable connection between loyalty to a state and citizenship of a state. She emphasized that the State of Israel must acknowledge the fact that its citizens are equal irrespective of their descent. However, she acknowledged a similarity of the German nationality law of 1913 (Reichs- und Staatsangehörigkeitsgesetz), which based access to citizenship primarily on descent, and Israel’s “Law of Return”.

Professor Weiss introduced Professor Moshe Zimmermann from HU’s Richard Koebner Minerva Center for German History by asking him whether he saw any differences in the German vs. Israeli laws in regards to citizenship. Professor Zimmermann stated that we should not use history to give ourselves direction or inspiration, but to understand the thinking and the behavior of individuals and groups. By doing so, we can avoid catastrophes that have occurred from discriminatory citizenship and naturalization laws. Prof Zimmermann hold that in Israel, naturalization is based on ethnicity; to progress from what we have learned from the past, Zimmermann claimed Israel must begin to find an inclusive definition of what “being an Israeli citizen” means – a definition which is based on human and civil rights rather than ethnicity. The current legal situation, he argued, is dividing Israel’s population between the majority vs. the minorities instead of uniting a diverse population.

Professor Mordechai Kremnitzer from the Israel Democracy Institute and HU brought up the point of where Israelis should actually be comparing themselves to Germany in terms of naturalization and citizenship. What we did learn was that the low esteem of and discrimination against a minority led to a pathological development. He acknowledged that the challenges Israel faces are unique because a clear-cut national identity needs clear-cut borders – something Israel does not yet have in its East. In the Westbank, it is holding sway over a population upon which it cannot and does not confer civil rights. Without clear-cut borders in the East, Professor Kremnitzer implied, it will also be a problem for Israel that its Arab citizens partly identify themselves with the Arabs in the Westbank rather than their own state, i.e., Israel. Professor Kremnitzer concluded that the big question is if Israel can create a common denominator for all its citizens, and noted that Israel doesn’t even host a holiday that is shared by all segments of its ethnically and religiously very diverse population.

Professor Yfaat Weiss continued by asking what sense the concept of “civil society” made in Israel. Professor Zimmermann expressed that we cannot use the precise translation for “civil society” in the fashion other liberal democracies do, emphasizing that Israel faces many unique issues because of the lack of separation of church and state. Prof. Kremnitzer countered Prof. Zimmermann by explaining that Israel indeed has a vibrant civil society. This is proven by the success of many organizations in promoting human rights and protecting minority citizens. This progress has reached government levels and penetrated the political atmosphere, Kremnitzer stressed.

The panel summed up the symposium by explaining that the dual topic of loyalty to the state and security from massive external threats put Israel in a unique situation. However, it was also agreed that the loyalty of Israel’s minorities crucially depended on their conviction that they were enjoying full legal equality and social acceptance. 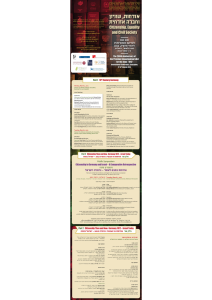 Citizenship in Germany and Israel

To the event
Leo Baeck Institute Jerusalem
More about this topic 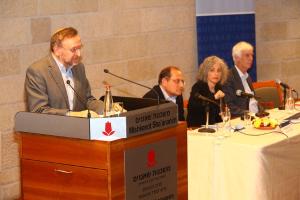