Supporting and Advancing the Status of Women in Israel

As part of the efforts by the Israel Women’s Network (IWN) and the Konrad-Adenauer-Stiftung to support and advance the status of women in Israel, the conference discussed and promoted two new bills written by IWN’s legal department, for the consideration of the Knesset regarding work-life balance in the workplace. The conference was hosted by Knesset member Orit Zuaretz, Chair of the Lobby of Women’s Employment, Knesset members and government representatives.
December 20, 2011 Ordering Information

MK Zuaretz opened the conference and acknowledged the activities of the IWN and KAS to help improve the status of women in Israel in all spheres of life. The work-life balance bills, based on the adaptation of existing models from abroad, were presented by Adv. Odelia Levy-Ettinger in order to lobby Members of Knesset for their support to bring the bill to a first reading on the Knesset floor in the near future. The bills advocate:

It is important to note that the bill covers both men and women and aspires to increase the number of men taking advantage of flexible work hours to spend more time at home and share the family tasks with the women. The IWN sees work-life balance as an issue that is linked with the social justice movement in Israel. In the Israeli workforce:Some of the options provided by the bills include flexibility in entry and exit times at work, home office options, a monthly bank of hours (rather than a daily one), part-time positions.

The Laws could be based on the 2002 Employment Act as passed in the United Kingdom: The employee has the right to request flexible hours and employer must consider the request and give a written response with detailed explanations.

The legislation’s goal is to change the discourse in the workplace and eventually change workplace culture. But it is important to note that the law does not require, but forces employers to seriously consider the requests. Research has shown that companies that have work-life balance programs in place have less employee turnover as well as a higher rate of employee satisfaction and motivation.

British Telecom was presented as a case study:

Some of the Knesset Members present remarked on the proposed bills. MK Afou Agbaria from the Hadash Party agreed that the two laws being proposed will allow more women to join the workforce and better balance work and personal life. He also noted that on that very day the Knesset had recognized individuals with special needs adding that in families with children with special needs the main responsibilities usually fell on the mother. Moreover, there is a stereotype in the Arab sector against men taking an active role in childcare. So these laws could help change this while creating more opportunities in the workplace for Arab women.

MK Eitan Cabel from the Labor Party explained his participation in the conference by stating his belief in men’s involvement in these issues (it does not concern only women). These work-life balance laws are similar to the Reservists’ Law that is currently under review. Unfortunately they will be difficult to pass but it is a great step in the right direction and they will help change perceptions.

For MK Daniel Ben Simon (Labor), Israel needs new forward-thinking legislation such as this to help push the country into the future. The issue of the lack of women in public office and service must also be addressed; women must hold the same offices as men in order for real change to take place.

The presentations by panel participants were followed by a discussion with the public. Moshe Levin, Deputy-Director of the Ministry of Industry, Trade and Labor, confirmed that as a private citizen, he fully supports this law. Nevertheless, it will be difficult for government offices to offer part time positions. He would prefer full-time positions with flexible hours. In his ministry, rules exist to help mothers (such as no meetings after 14:00), although they are hard to enforce.

Ms. Orna Segal, Director of Manpower (one of Israel’s largest human resources companies) does not believe such laws are really needed as today’s worker is looking for flexibility and will not accept positions that do not offer it. As a matter of fact businesses and organizations were starting to take notice and change accordingly. The business environment is adapting and in order to retain employees employers ought to provide flexibility. Otherwise employees will seek better offers and leave.

Ms. Hamutal Ben-Dor, Deputy-Director of Wages at the Ministry of Finance stated that Government is a great place for women/mothers to work. She provided some data on women in the workforce:

The audience could not go along with Ms. Segal’s statements entirely. The employers’ flexibility might exist but only towards the employees in higher ranking positions. Workers in low ranking positions do not benefit from flexible conditions.

The conference, which addressed issues rather novel in Israel, attracted a large number of participants, especially women in prominent positions in the business world, heads of city councils, lawyers, students and representatives of women’s organizations.

Through the bill proposals of work-life balance, this conference aimed at promoting the creation of a working environment that encourages a balance between the professional and personal lives of the Israeli worker. The aim is to alleviate and lessen the pressures of dealing with professional responsibilities and personal family obligations. Additionally, it would allow women to fully integrate into the workforce in a variety of positions. The bills also brought up another issue which will become of vital importance in the future: equal pay for equal work.

This very special event at the Knesset symbolizes what the joint activities of KAS and IWN stand for: the advancement of women, the fight for equality in all fields and in particular to give all women the opportunity to combine work and career in better and more flexible working conditions, from which the families and society as a whole will benefit.

Work-Life-Balance and Equal Pay for Women

To the event
Israel Women's Network
More about this topic 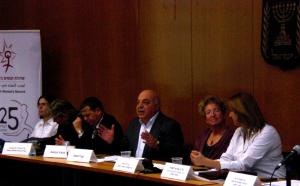 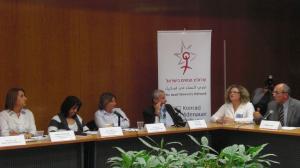