WHAT ARE “MILITARY OBJECTIVES”?

A key issue for the protection of the civilian population

On November 24 & 25, 2013 the 8th conference on Humanitarian Law in Jerusalem took place. The importance and success of the conference was shown by the large number of high-ranking experts in attendance. The series of conferences, organized jointly by the Minerva Center for Human Rights, the KAS Israel and the International Commission of the Red Cross (ICRC) has developed into one of the most important forums for discussion on controversial issues relating to the interpretation and application of Humanitarian Law.
November 27, 2013 Ordering Information

The primary objective of this year’s conference was the interpretation and application of articles 51, 52 and 57 of the Protocol Additional to the Geneva Conventions of 12 August 1949, relating to the Protection of Victims of International Armed Conflict(Protocol I), 8 June 1977.

The relevant provisions rule literally (every legal term which is relevant to the conference has been emphasized in cursive):

Article 51. Protection of the civilian population

1. The civilian population and individual civilians shall enjoy general protection against dangers arising from military operations. (…)

3. Civilians shall enjoy the protection afforded by this section, unless and for such time as they take a direct part in hostilities.

(a) those which are not directed at a specific military objective;

(b) those which employ a method or means of combat which cannot be directed at a specific military objective; or

(c) those which employ a method or means of combat the effects of which cannot be limited as required by this Protocol;

and consequently, in each such case, are of a nature to strike military objectives and civilians or civilian objects without distinction.

2. Attacks shall be limited strictly to military objectives. In so far as objects are concerned, military objectives are limited to those objects which by their nature, location, purpose or use make an effective contribution to military action and whose total or partial destruction, capture or neutralization, in the circumstances ruling at the time, offers a definite military advantage.

3. In case of doubt whether an object which is normally dedicated to civilian purposes, such as a place of worship, a house or other dwelling or a school, is being used to make an effective contribution to military action, it shall be presumed not to be so used.

Article 53. Protection of cultural objects and of places of worship

Without prejudice to the provisions of the Hague Convention for the Protection of Cultural Property in the Event of Armed Conflict of 14 May 1954, and of other relevant international instruments, it is prohibited:

(a) to commit any acts of hostility directed against the historic monuments, works of art or places of worship which constitute the cultural or spiritual heritage of peoples;

(b) to use such objects in support of the military effort;

(c) to make such objects the object of reprisals.

1. In the conduct of military operations, constant care shall be taken to spare the civilian population, civilians and civilian objects.

2. With respect to attacks, the following precautions shall be taken:

(a) those who plan or decide upon an attack shall:

(i) do everything feasible to verify that the objectives to be attacked are neither civilians nor civilian objects and are not subject to special protection but are military objectives within the meaning of paragraph 2 of Article 52 and that it is not prohibited by the provisions of this Protocol to attack them;

(ii) take all feasible precautions in the choice of means and methods of attack with a view to avoiding, and in any event to minimizing, incidental loss or civilian life, injury to civilians and damage to civilian objects;

(iii) refrain from deciding to launch any attack which may be expected to cause incidental loss of civilian life, injury to civilians, damage to civilian objects, or a combination thereof, which would be excessive in relation to the concrete and direct military advantage anticipated;

(b) an attack shall be cancelled or suspended if it becomes apparent that the objective is not a military one or is subject to special protection or that the attack may be expected to cause incidental loss of civilian life, injury to civilians, damage to civilian objects, or a combination thereof, which would be excessive in relation to the concrete and direct military advantage anticipated;

(c) effective advance warning shall be given of attacks which may affect the civilian population, unless circumstances do not permit.

3. When a choice is possible between several military objectives for obtaining a similar military advantage, the objective to be selected shall be that the attack on which may be expected to cause the least danger to civilian lives and to civilian objects.

The first conference day was mainly concerned with the following questions of principle:

Session 1: The Mystery of Tests and Triggers: Does it all boil down to the Standard of proof?

The first session under the chairmanship of David Kretzmer (Hebrew University of Jerusalem and Sapir College) was characterised by the opening address of Francoise Hampson (School of Law and Human Rights Centre of the University of Essex). She mainly replied to the question of what could be enough evidence to treat an object as a “military objective”.

Hampson emphasized that she wanted to answer the question only through the perspective of the Law of Armed Conflict (LoAC) and not through the perspective of the International Criminal Law (ICL). What is also important to consider that such a question is not answered with the benefit of hindsight but from the perspective of the person who must analyze the situation in real time whether or not the object is considered a “military objective”. In this context it has to be distinguished through military reconnaissance investigated facts and interpretation. In such a case, there is often no absolute certainty but a lot of “known unknowns”.

A margin of error has to be conceded for those who are under pressure to make this type of military decision.

In the following session, the topics have been further deepened. Robin Geis (School of Law; University of Glasgow) criticized that in its current version, Article 52 (2) gives no clear criteria for a comprehensible identification of “military objectives”. This becomes particularly obvious with “Dual-Use”- objects; civil objects which are- actually or supposedly- being used for military purpose. He proposed to interpret the criteria of “military purpose” as the stricter and the worse of the expected consequences of an attack on the object in question where civilians are involved.

Laurent Gisel (Legal Adviser of the International Committee of the Red Cross, ICRC) provided the view that the current legal position offers enough possibilities to improve the protection of civilians: “We need to work with the text we have.” The ICRC is clearly against interpreting the term “military objective” too extensively. It could indeed mean a relevant intention to destroy the infrastructure of the enemy – but it goes too far to consider par example, electric power stations as “military objectives”.

The lawyer Pnina Sharvit Baruch (Institute for National Security Studies, INSS) commented on the problem of the dimensions of “military objectives” (see above the example “sniper in a four-story building”). She recommended flexibility by the interpretation of the term “military objective“, and emphasized that the prohibition of “indiscriminate attacks” must not be undermined.

The second conference day, which was divided into four sessions, was concerned with the new challenges Humanitarian Law is faced with in terms of purpose and treatment of “military objectives”.

Yuval Shany, (Dean of the Faculty of Law, Hebrew University of Jerusalem) the chairman of the first Panel, commenced the session and led over speakers: Eitan Barak (Department of International Relations, Hebrew University of Jerusalem), Noam Neuman (Head of International Law Department, Military Advocate General’s Corps, Israel Defence Forces) Noam Zamir (Doctoral Candidate, University of Cambridge) as well as Ruvi Ziegler and Lawrence Hill-Cawthorne (both from the University of Reading School of Law). The panelists shared their thoughts, researched results and related questions with the audience.

Daphné Richemond-Barak and Ayal Feinberg (Interdisciplinary Centre Herzliya, IDC) made intelligent defense systems a subject of discussion. They showed an example of the “Iron Dome”, the Israeli mobile missile defense system, and under the perspective of Humanitarian Law, how the traditional civilian/military - dichotomy is inappropriate for this new type of defense system. The next speaker Ido Rosenzweig (Israel Democracy Institute and Chairman of the Association for the Promotion of International Humanitarian Law, ALMA) spoke afterwards about the difficult question whether a civilian (e.g the driver of a ambulance vehicle could be part of a “military objective when his vehicle is loaded with ammunition without his knowledge) ”.

A fifth panel dealt with the Tallinn Manual (“Manual of the International Law for Cyber-Warfare”) and the application of the traditional nomenclature (“objects”, “military objectives”)to the new phenomena of cyberspace. The question whether data, despite missing materiality, are an “objects” which could be a “military objectives” was one of the most important issues in this context. It was discussed in particular regard to cyber-warfare and the legitimacy of attacking networks.

Michael Schmitt (United States Naval War College, University of Exeter and NATO Cooperative Cyber Defence Centre of Excellence) spoke about the Tallinn Manual in which he explained that the manual is a non-legally binding description of rules of the Humanitarian Law for cyber operations and their application to “military objectives”. Afterwards, Kubo Mačák (University of Exeter) addressed the possibilities of interpreting “military objectives” with regards to cyber warfare and the classification of objects like data in traditional terminologies. Heather A. Harrison Dinniss (International Law Centre, Swedish National Defence College), addressed the questions raised by the previous speakers and expounded on the necessity of rethinking the terms of Cyberspace and the unconventional use of definitions for virtual objects.

The final panel was held by Guy Keinan (International Law Department, Military Advocate General’s Corps, Israel Defense Forces, IDF) Agniezka Jachec-Neale (University of Essex) and Ken Watkin (Former Judge Advocate General for the Canadian Forces). Their session dealt with the difficulty of attacks against opposing state property and opposing political leaderships, questions of proportionality in terms of purposes with fragmentary information and behavioral standards, strategies and tactics in cases of uncertainty and the role of “unreasonable belief”.

The conference brought together world leading experts in International Humanitarian Law. In view of the rising number of unbalanced, non-traditional and non-international conflicts as well as new developments in military technologies, the problems discussed are of highest actuality. These topics apply particularly in the Middle East, which - since the outburst of still ongoing political unrest in the Arab world - has been confronted with a various number of bloody conflicts, which ends cannot be foreseen. The audience of specialists took the opportunity to engage in intensive exchange of views and establish new international contacts. It would be desirable that more German experts on International Humanitarian Law would be involved in such debates in the future. The discussion seems more advanced in Israel, the USA and the UK than in Germany. It is obvious that the issues discussed on the conference raise questions which are by no means yet answered and emphasize the necessity for an increased international dialogue. 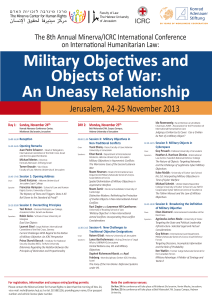