YOUTH COLLABORATION OF PEACE AND SUSTAINABILITY

On October 26th-28th the Konrad-Adenauer-Stiftung hosted in cooperation with the Eastern Mediterranean International School (EMIS) the yearly Youth Collaboration of Peace and Sustainability Conference (YOCOPAS). The conference took place in HaKfar HaYarok and ten Israeli and Palestinian schools participated in it. The goal was “to enhance peace and sustainability in the middle east through networking of local and international students and educators as an accelerator for change”.
December 20, 2016 Ordering Information

The opening event included welcoming words as well as performances of the students. Maria Fabiana Vasquez, a student in EMIS, opened the event and mentioned how much work they have put in the creation of the conference and hoped that it will change some of the views of its participants. Next was Dr. Kobi Naveh, the General Director of HaKfar HaYarok, to greet the audience and said regarding the youth “we grow faster than our differences”. After him spoke Oded Rose, the founder of EMIS and explained the reason behind the idea to establish the school. Thirty-five years ago studied Rose in an international school in Canada and realized how education in an international creates a deep respect to people with different backgrounds, even in conflicted societies such as in the Middle East. His dream was to bring the same concept of international school to Israel. With the establishment of EMIS in 2014 he fulfilled his dream. His final word to the young guests was “it worth to follow your dreams and not to give up”.

Dr. Michael Borchard, the head of the KAS office in Israel, chose in his speech a quote of Anne Frank “How wonderful it is that nobody need wait a single moment before starting to improve the world”. He praised the students for their courage to participate in the YOCOPAS conference, knowing the criticism that waits for them back at home. This step demands much trust in the organization and the participants of the conference. He thanked EMIS and all other participants for accompany the students in their courageous way to change the world.

A representative of a school in the Gaza strip emphasized in his speech how incredible event it is and how all the efforts in the last weeks and months were worth it. He wishes that in all schools students will not only learn reading and writing but also to respect, to be tolerant and to recognize sometimes new and unusual “all of us are a long-time students in the school of peace. The better we are in school, than we will become more peaceful towards our family, friends, humans and also our neighbors”. Dr. Nedal Jayousi, the chairman of the Palestinian House for Professional Solutions (HPS) stressed how complicated it was to bring Palestinian students to Israel but also that this conference sends is a clear message to all the critics in the West-Bank, Gaza and Israel. He encouraged the participants by saying that “Where there is a will, there is a way”.

“It isn’t enough to talk about peace. One must believe in it. And it isn’t enough to believe in it. One must work at it” started Rachelle Schilo, development director in EMIS, her opening words. The quote of Eleanor Roosevelt is important to understand how peace can function. After all the greetings the students of EMIS sang “Imagine” by John Lennon and the Taiko Group of EMIS, under the direction of Nitai Zelniker, amazed the audience with a percussions performance. Dr. Goren Gordon, the head of the laboratory for curiosity in the Tel Aviv University, closed the evening with a dynamic lecture about robots and curiosity.

On the second day, after breakfast and a short treasure hunt game, each student participated in one of the twelve offered workshops. Arik Segal’s workshop about “Sustainable Conflict Management” instructed the students to think about peace building as such as any other project planning. They shared their ideas and suggested projects to solve the conflict. Stephanie Fox’s workshop “Can an understanding of the mind bring about world peace” maintained that if we learn to control our emotions and angers regarding the other side we will be able to think clearer and not out of hatred. In the workshop “One world many stories”, each participant was free to tell stories share feelings from one’s point of view. At Rafi Boneh’s collage workshop “Human in Natural Environment” the participants learned how by using different pictures one can share knowledge. With Tal Harel and Alon Banki’s experimental photography workshop “Knowing each other and myself through the lens of the camera” the participants developed their own pictures and understood that by framing each one has a different perception of the world.

Gal Raveh’s video workshop “Musical clips and interpersonal communication” the participants made short films together. With Nili Goldfine’s “effectively managing a project” workshop the students learned how to manage a project in a chaotic world and to distribute work, while keeping things simple. The students at Nadia Dias’ workshop created a peace and sustainability puzzle out of many pieces. EcoPeace members from Israel, Jordan and the Palestinian authority were leading the “Water and Peace – Much deeper than you think” workshop and portrayed the interests and difficulties involved in a peaceful and sustainable water policy between the three countries. Dr. Robert Roach was teaching about renewable energies and Itamar Avishay together with Gil Sidis were instructing the participates how to cultivate the super food spirolina. One of the most popular workshops was the one of “Chefs without borders” who taught how food can be a way of communication and discussion between Muslims, Jews and Christians.

After lunch each group has presented to the rest of the audience its workshop and what they have done and learned together. After a short presentation of Paulina Raduchowska from the Anna Lindh Foundation there was a panel moderated by two students about “to what extent can youth make change?” The speakers of the Panel were Dr. Nedal Jayousi, Nadia Dias, Tal Harel and Gili Roman. Dr. Jayousi claimed that change can only be done by youth as shown in the Arab world. On the contrary, Gili Roman argued that the youth should learn first how to make a change and only later on try to make it. After dinner the educators and the students split into two committees to discuss the next steps of the youth collaboration between Israeli and Palestinian schools in the coming year, what should be improved and how to expand their work and reach other schools in the region.

On the third day, all students visited the Ariel Sharon Park for Recycling and environmental Rehabilitation. There they have seen the amounts of garbage that metropolises Dan creates every day and learned about the ways to reduce it. They also learned about the history of the landfill and the reason why Israel stopped to throw waste there. They toured the site and practiced ways of recycling materials. Eventually they returned to HaKfar HaYarok and each school returned back home. 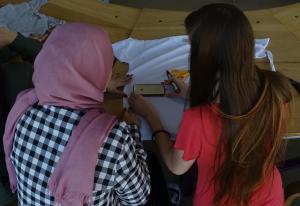 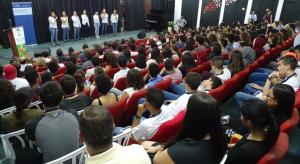 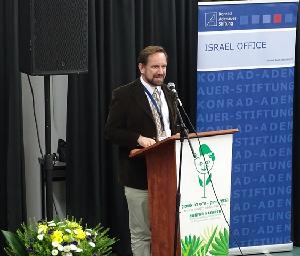