The Japan office of the Konrad-Adenauer-Stiftung organised its second online election event in the morning (German time) after the election of the 20th German Bundestag on 26 September 2021. Mr Jürgen Hardt, Member of the Bundestag (German Parliament), Member of the Foreign Affairs Committee and Foreign Policy Spokesperson of the Christian Democratic Union/Christian Social Union (CDU/CSU) Parliamentary Group, was our speaker.

The KAS Japan series of events on the German election was intended to support the work of journalists, think tanks, researchers and government officials who are interested in German and European politics. The aim of our discussion was to get a deeper understanding of the new era in German politics.

The re-elected MP emphasised that the voters in Germany understood this election as an evaluation of the 16 years of Angela Merkel's chancellorship. According to MP Hardt, the CDU/CSU failed to adequately present both its political accomplishments, as well as its plans for the future.

Mr. Hardt underlined the challenges of the COVID-19 pandemic for the economy. He also discussed how technological innovations and research play a crucial role in climate protection and in achieving climate goals.

With regard to the involvement of the German Armed Forces in missions abroad, MP Hardt said that Germany is ready to have an international military presence as part of a comprehensive approach. The military option is, however, only one element of the foreign missions. A much more important area of focus is sustainable development. To achieve this, however, humanitarian and development aid must go hand in hand.

MP Hardt argued that Germany has a great interest in synchronising both its China strategy and its overall Asia strategy with the developments at the European level. He hopes for Germany to become the driving force of the Common Foreign and Security Policy of the European Union.

The discussion was moderated by Ms Rabea Brauer, Country Representative of the Japan office and Director of the Regional Economic Programme Asia (SOPAS) of the Konrad-Adenauer-Stiftung. 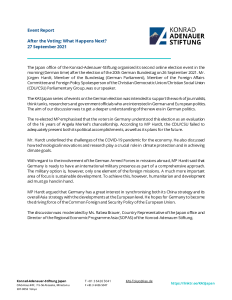