What Can We Expect?

One month before the 2021 federal election, on 27 August, KAS Japan organised its first online election event. Ms Ursula Groden-Kranich, Member of the Foreign Affairs Committee and the Committee on European Union Affairs of the Bundestag, was our speaker.

This event was organised to support the work of journalists, think tanks, researchers and government officials who are interested in German and European politics. The aim of our discussion was to get a deeper understanding of the new era in German politics.

Ms Groden-Kranich participated in our event live from Germany and answered several questions from the Japanese audience. She criticized the short-sightedness of German and EU foreign policy and argued in favour of a new way of thinking and a more active international presence of the German Armed Forces.

Regarding the EU, Ms Groden-Kranich underlined that the idea of networked cooperation at the European level is being gradually lost: "We cannot learn from the pandemic in isolation from our European neighbours, we have to learn together."

The German MP emphasized that not many are aware of the tensions in the Indo-Pacific, which is why the political debate on Germany's role as a peacekeeping force in the area remains controversial in the political debate. In addition, she argued that Germany and the EU should become more economically independent from China.

The discussion was moderated by Ms Rabea Brauer, Country Representative of the Japan office and Director of the Regional Economic Programme Asia (SOPAS) of the Konrad-Adenauer-Stiftung. 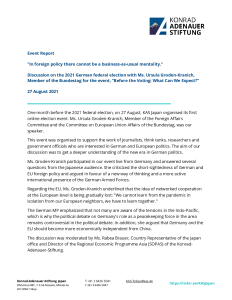 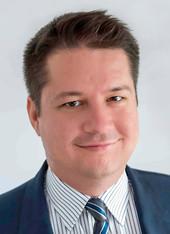