Chhor Yi Eung, 23, is the first Cambodian who is doing her internship in the European Parliament. Under the scholarship provided by the Konrad-Adenauer-Foundation, this third-year journalism student is conducting her internship in the office of Prof. Dr. Horst Posdorf, a German Member of European Parliament, as well as in the press department of the EPP group from 27th of August until the 26th of October, 2007. The EPP group is the biggest political group and stands for conservative values.
October 30, 2007 Ordering Information

"This is the first time that we have a Cambodian student doing an internship in our political group; the Cambodian journalism student will be able to see how professional journalists work in a European institution, as well as giving her an idea in which direction the journalism in Cambodia could be developed", Prof. Dr Horst Posdorf MEP said.

The member of the European Parliament also pointed out that independent journalism and free press is still very new in Cambodia. It will act as a fourth power that helps to promote democracy, bridge the gap between the government and the people and thus enable them to make informative decision.

During her internship in the European Parliament, Chhor Yi has learnt about the functioning of the European Parliament: she attended committee meetings as well as public hearings. In the press department she learnt to apply her journalistic principles in the real world by writing articles and press releases.

The Department of Media and Communication of Royal University of Phnom Penh is the first academic institution for media professions in Cambodia. It is compulsory for students in the department to do an internship at the end of their third year. Aiming at the promotion of a free press in Cambodia, Konrad-Adenauer-Foundation, the political 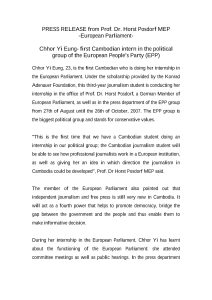