Agriculture and food have not only been the main drivers of the kingdom’s economy, but they are also a way of life for Cambodians and will likely continue to shape and affect them. These sectors have helped promote economic growth, reduce poverty, and ensure national food security (WorldBank, 2019).
July 7, 2020 Ordering Information 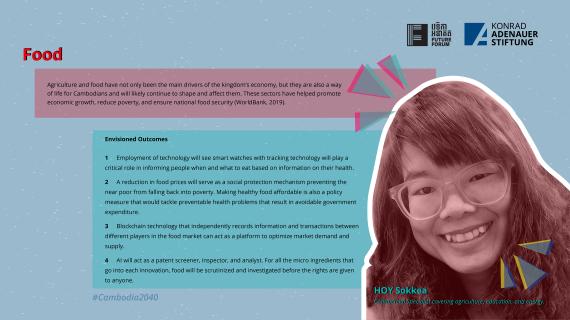 Why should I read this chapter? ... because food always matters, even in 2040!

Ms. Sopheak Jing is so occupied at work that she forgets it is time for lunch. Thankfully, her smart watch alerts her to the time and suggests a few options based on her eating history. Having found a particularly well rated Kampot Pepper Crab stew, Sopheak taps to order and awaits delivery. Unlike times of old, her meal is prepared in the newly established KitchenLab where robotic chefs create dishes from a vast pantry of raw ingredients. Once cooked, meals are transported to the destination by a fleet of driverless tuk-tuks. Packaging is complete with a QR code that contains information on the origin of produce alongside nutritional information. She picks up her phone to scan the QR code and finds out that the farmers were from Kampot (crab), Kampong Cham (pepper) and Battambang (rice). Should she wish to explore further, she can see how long the pepper and rice took to grow and understands which types of fertilizers and seeds that were used.

Mr. Visal Hak owns a 50-hectare farm. He grows various crops including rice, pepper, corn and a cassava. Orders for his produce are made through a platform on his smartphone developed in a public-private partnership to address food scarcity, access, and farmer equity. The application will match him to suppliers, consumers, and support personnel when needed. Hak divides his farm into different plots based on the level of land, the type of soil, the nutrient content of the soil itself, and the proximity to other farms. Information on these matters is continually collected through a range of ground sensors and drone mapping processes. In addition, Hak has employed a smart irrigation system that works alongside AI robotic instruments that are able to take remedial action in the case of a substandard change in the environment. 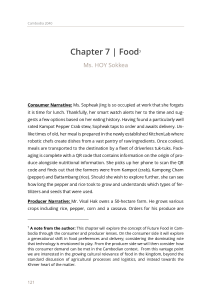 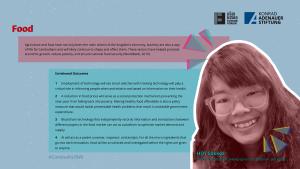 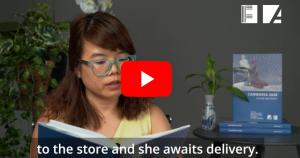