Cambodian foreign policy in the next 20 years will be shaped by the developing re-configuration of regional and global political powers, dictated by a relentless competition for influence to secure supremacy.
February 28, 2021 Ordering Information

Why should I read this chapter? ... because Cambodia's foreign policy is getting more critical amid the great power competition in geopolitics!

While the possibility of a multipolar world is regularly mooted by analysts, this option is not considered here for two reasons. First, there is the yawning gap in military power - which is only likely to widen - between the US and China and all other actors. While the European Union (EU) is and will continue to be a major actor in terms of trade, aid, investment, and the promotion of global norms of human rights, EU member states’ unwillingness to invest in significant expansion of military power ultimately undermines the possibility of it acting as an independent pole. Second, there is the case of Russia - which suffers from the opposite problem. While Moscow maintains its significant nuclear arsenal and significant conventional military forces, its economy remains weak and highly resource dependent. With a GDP only slightly larger than that of Australia, it is difficult to see how Russia can achieve its long-standing revisionist goals in light of the size of its economy. Moscow continues to remain primarily a regional force - focused on its “near abroad,” and acting globally through the means of asymmetric warfare, depicting its relative weakness.

For Cambodia, regardless of which of the three realities set out below takes hold, each would have highly significant although somewhat differing impacts on the kingdom’s future agency and its ability to influence the direction of subregional, regional, and global political outcomes as well as the protection of the kingdom’s own national interests. As a relatively small state in terms of geographic size, population, and economy - Cambodia has confronted and will continue to confront a very different foreign policy landscape than that of not just the great powers, but also its own ASEAN partners. Indonesia, Thailand, Vietnam, and the Philippines - due to their sheer size - will face a significantly less demanding, although still extremely challenging path, and maintain much greater room to maneuver than Phnom Penh.

It is important to note here that Cambodia’s modern history is one that has been heavily determined by geopolitical competition among foreign powers larger than itself. European competition for hegemony in Southeast Asia resulted in Cambodia becoming a French protectorate in the 1800s. A century later it was the Cold War and US-Soviet competition and the war in Vietnam that ultimately destroyed King Norodom Sihanouk’s quest to maintain Cambodian neutrality and sovereignty and resulted in the rise to power of the Khmer Rouge regime and the subsequent genocide that killed over 1.5 million Cambodians. Since the close of the Cold War, Cambodia has experienced a very unique set of historical circumstances: geopolitical stability. The post-Cold War geopolitical equilibrium inclusive of the maintenance of the Bretton Woods Institutions and the institutionalization and expansion of ASEAN has given Cambodia space to develop, climb the ladder of human development, and find its place in the family of Southeast Asian states. Each of the four geopolitical equilibria - even the maintenance of U.S. hegemony in the region - in light of other global trends and diverse developments in national politics will mean that Cambodia will remain vulnerable and will face a very different world than that which has existed since the 1991 Paris Peace Accords. 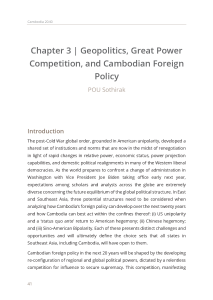