In 2040, the public sector requirements of the Cambodian citizenry continue to be shaped by enhanced economic performance, globalization, and domestic advancements in digital information and technology systems.
February 28, 2021 Ordering Information

Why should I read this chapter? ... because digital public administration will bring Cambodia forward!

Mr. Aoudourm Yann's vision for Cambodia's digitalization and talent in public administration in 2040:

Vireak is a public servant representing the Tonle Bassac Sangkat in Phnom Penh. He was recruited from the Royal University of Law and Economics following graduation and spent his first two years as an intern in the department of e-citizenry. During this time, he was trained in effective digital response through the ministry’s e-administration platform. Today, he begins the next stage of his career as a supervisor in the services department. It will be Vireak’s role to analyse domestic and national trends that have the potential to affect the menu of citizen requirements in relation to public administration. This data forms a key component of the Sangkat’s “town-hall” meetings, where local residents and public administration representatives provide updates and undertake discussion on potential reforms. 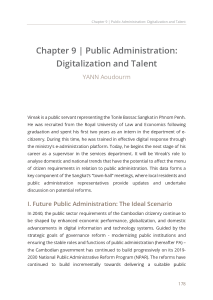