With a major transition to renewable energy, the Mekong, metaphorically speaking, would be put to rest, allowing biodiversity to revitalize itself. The river flow will return to normal, minimizing the risk of drought during the dry season and flooding during the rainy season. The livelihoods of those along the Mekong and millions of others that depend on it would be improved, their living standard would be increased through various means including the advancement of the eco-tourism and hospitality industries.
February 28, 2021 Ordering Information

Why should I read this chapter? ... because Mekong is going to be the heart of the future sub-regional diplomacy.

Sithivong (សិទ្ធិវង្ស) is sitting at his office inside the ASEAN Secretariat building in Jakarta, reviewing various documents ahead of the upcoming “Annual Mekong Plus Summit” to be held at the end of 2040. He has been appointed to undertake the role as Chair of the ASEAN Mekong Basin Development Cooperation (AMBDC) under Cambodia's quota as the first member state to revitalize this mechanism. The mandate for this rotating chair would last for approximately five years in accordance with the alphabetical order of the five Mekong countries. A long-serving diplomat who has had extensive experience in the Mekong affairs for decades, Sithivong is more than competent to steer things forward as regards the inclusiveness of all Mekong subregional mechanisms. During his first year at the office, he pledges to minimize competing interests and maximize collaboration.

Anusa​​ (អនុស្សា) has been a strong advocate for the livelihood of the Mekong but primarily explores the question of hydropower and how it has become increasingly inefficient, both in terms of cost and energy generation. Recognizing these realities, she established a non-profit firm to supply solar power to local households which eventually was scaled up in order to supply a national-scale solar farm, including technical support where needed.

Anusa has also received strong support and encouragement personally from Sithivong who has long been a dedicated proponent of the renewables transition. He then helps to introduce and connect “RE for Cambodia” to various stakeholders of the Mekong subregional mechanisms across the region as well, of which some individuals have taken up her approaches and set up similar firms and other countries begin to engage “RE for Cambodia” to support them setting and/or scaling up the solar farms in their respective countries. Anusa’s firm and Sithivong’s commitment have helped to vivify Cambodia’s vision to become a champion in renewable energy’ to set stage the baseline for proactive diplomacy with all development partners on the Mekong and beyond; and to eventually have the Mekong issues as part of the ASEAN key agenda via AMBDC. 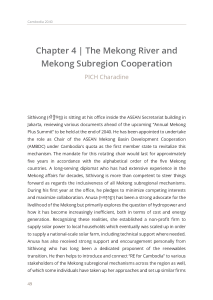