Clientelism as the Link between Voters and Political Parties

The Lebanese Center for Policy Studies (LCPS) and Konrad Adenauer Stiftung organized a conference entitled: "Clientelism as Link between Voters and Political Parties" on December 19, 2014 at the Monroe Hotel, Beirut.
May 4, 2015 Ordering Information

While much of the public discussion in Lebanon about elections has focused on either a new electoral law or the parliament’s decision to extend its own term, voting behavior and the relationship between voters and political parties have not received the same level of attention. At a conference on Friday 19 December 2014, hosted by the Lebanese Center for Policy Studies and Konrad Adenauer Stiftung titled “Clientelism as the Link between Voters and Political Parties” over 100 participants, including former ministers, MPs, scholars, and members of civil society, discussed and analyzed the nature of this relationship.

Among the themes highlighted at the conference were:

- Political brokers act as the eyes and ears of parties and politicians, and are tasked with responding to citizens’ demands and requests as well as mobilizing supporters during elections

- Patronage can take many forms and parties use a variety of methods to secure political support, suggesting that administrative and judicial reform and decentralization would be needed to end clientelistic practices

- Adopting a new electoral law, as well as reforming electoral funding methods, the size of districts and how they are distributed, and the appointment process for authorities that organize and supervise elections could be the first step to breaking the cycle of clientelism

During his opening address, Mr. Sami Atallah, the executive director of the Lebanese Center for Policy Studies, defined clientelism as an unequal relationship in which politicians provide a variety of services as well as jobs in return for political loyalty. Atallah said under this practice—in conjunction with the electoral law which changes every four years—elections are not an opportunity for the voter to elect his/her representatives but rather for politicians to select their voters. In this way, the idea of political representation and accountability has been inverted. Furthermore, given that there is no accountability or incentive for politicians to formulate policies and provide national development projects in most instances, politicians compete with the state in the provision of these services through the use of state resources, and in the process weaken the role of the state. Consequently, Atallah argued that citizens become hostage to politicians as opposed to benefiting from the services provided by their government.

Mr. Peter Rimmele, the head of the Rule of Law Program Middle East and North Africa at Konrad Adenauer Stiftung, argued that as a result of Lebanese political parties not campaigning based on political platforms, parties mobilize the voting public using other methods and often resort to clientelistic practices. Rimmele said he hopes that studies, such as those presented at the conference, would offer further insight into whether political patronage stems from direct favors or services extended to constituents, or whether political loyalty still plays a major role in determining a citizen’s political leanings or loyalties.

HE Mr. Christian Clages, the German ambassador to Lebanon, discussed clientelistic practices in Lebanon and compared them to election practices in Western democracies. He argued that in Western electoral campaigns programmatic differences between political parties often disappear, using the convergence between Christian and Social Democratic parties’ platforms in Germany as an example. The result according to Clages is that voters often decide who to vote for based on individual traits and actions, as well as promises made by candidates, which Clages argued should be understood as a form of clientelism. To expand on this point he explained how public funds are often allocated in Western democracies and argued that party leaders in such countries effectively “pay” voters in the form of policy changes, which might include health benefits, affordable housing, or unemployment benefits. He described Lebanon as very unique in comparison, saying that the consensual nature of Lebanese politics lends itself to clientelistic practices, and due to the often secure incumbency of politicians running in confessional parties, the prospect of accountability is undermined.

HE Mr. Ziyad Baroud, the former minister of interior and municipalities, then delivered the keynote address, during which he argued that in Lebanon, government services and rights are bought rather than granted. He compared the Lebanese situation to one of a ‘mini market’ in which services of all kinds are for sale in return for patronage. He added that Lebanese citizens have often unknowingly assented to participating in this system of supply and demand and consequently have become beholden to it. On account of clientelism being ‘deeply layered’, Baroud listed five areas which should be examined if the cycle of citizens entering into an exchange with leaders for access to services is to be broken: The current electoral law, the size of constituencies and how they are distributed, electoral funding, the level of citizen participation in policymaking, and authorities that organize elections and supervise them. As such, Baroud argued that adopting a new electoral law could be the initial step toward breaking the cycle of clientelism and beginning to change the way citizens view their relationship with the government and political leaders.

The conference’s first session, which was chaired by MP Mr. Ghassan Moukheiber, focused on the relationship between voters and political parties within the framework of sectarianism.

Dr. Fadia Kiwan, a professor of political science at Saint Joseph University, first defined and explained how the terms sectarianism and favoritism relate to one another. She highlighted how in the West and other “advanced democracies” clientelism is a practice which is frowned on while in the third world, where democratic governments are young or have failed to take hold, clientelism is the basis of relationships and mechanisms which deliver services. Because ministers and important political families often wield significant power in such systems, Kiwan argued that the best method by which to combat favoritism is through decentralization and administrative reform.

Dr. Farid El-Khazen, an MP and professor at the American University of Beirut, argued that favoritism rather than clientelism better captures the nature of the relationship between politicians and the public. To understand this one must first understand the three types of clientelism that exist or have existed in Lebanon. El-Khazen classified each based on the period in which they originated and were prevalent: Pre-civil war Lebanon, Lebanon during the civil war, and postwar Lebanon. He argued that the foundations which were laid at the beginning of the republic—namely that leaders were experienced in politics and business was largely separated from politics—were destroyed during the war. In the postwar period political leaders often had little experience apart from being wartime leaders of communities or militias, and state institutions were heavily damaged on account of fighting among Lebanese and the Israeli occupation. In order to address this change and work toward equality under the law for all citizens, El-Khazen suggested focusing on reforms and policies at the municipal level.

HE Dr. Charbel Nahas, the former Minister of Labor, stated that in Lebanon clientelism should be understood as a system under which people are subservient to political leaders in return for patronage, as well as one that political leaders are economically dependent on to maintain power. He argued that this is the result of clientelism being based on a regimented economic framework that political leaders or ‘Zaims’ use to garner resources. These can consist of foreign money, the ability to appoint supporters to positions in the public sector, or employing the assistance of wealthy individuals in Lebanon. In addition, Nahas said the clientelistic structure is entrenched in Lebanese society and politics through a strict practice of loyalty, meaning leaders of political parties compete with one another to accrue resources and maintain loyalty among voting constituents. Nahas then prescribed three courses of action to weaken or end these intricate clientelistic structures. He argued that Lebanese citizens should not fall victim to political rhetoric based solely on what political leaders claim or promise, and that deconstructing politicians’ claims and arguments is an essential step toward changing their behavior. Second, Nahas stressed the importance of following the example of the Union Coordination Committee, which forced the hand of the government in its wage hike battle with teachers. Finally, he highlighted the state council and its role in ending unlawful public spending.

The second session, which was moderated by Dr. Issam Sleiman, the president of the Constitutional Council, discussed the nature of political parties, electoral machines that provide services, and vote buying.

Dr. Shawkat Echtay, a professor at the Lebanese University, described clientelism as “an exchange of interests” between two parties that is not in the greater public’s interest and argued that in Lebanon there has been a weakening of political reasoning and intellect. While in the past many Lebanese were active in political parties and other political organizations, he argued that contemporary political parties’ origins are not democratic in nature, are products of patriarchy and patronage, and depend on the leader of the party more than members of the party.

Dr. Elia Elia, a professor at the Lebanese University, discussed the role of money and how it is used in political campaigns. Using the 2009 elections as an example, Elia broke down the types of funds which are used to guarantee votes for a certain candidate. Chief among them are direct and indirect monetary contributions to supporters. Direct money is paid to individual voters, power brokers, and heads of families, among others, who will publically support a specific candidate and mobilize voter support for them. Indirect money consists of those services which a political figure can offer through their electoral machine and may also include allocating funding for specific projects, such as constructing a house of worship. Elia cited numerous cases where political parties and election commissions pay to bring people to Beirut from across the country to participate in rallies or hang political banners, all for a set daily wage and associated fees such as food and transportation. Often these individuals take part in multiple rallies, sometimes among rival political groups. Elia then elaborated on such practices using data collected on specific monetary amounts given to ‘supporters’.

The final panel member to speak was Ms. Zeina Helou, an LCPS researcher whose findings were primarily based on interviews with political brokers. Helou stated that brokers generally are tasked with focusing on specific geographic zones and are responsible for dividing up services and assessing the effectiveness of services rendered. The position becomes more established when elections draw near, as brokers are responsible for being the eyes and ears of political leaders. Helou also found that most often citizens approach brokers for assistance as opposed to services being offered to them. She determined that brokers are therefore responsible for maintaining communication networks, interacting with individual constituents on behalf of political leaders, and maintaining communication with brokers of other political leaders. Here, Helou noted that brokers are most often strictly loyal to the political leader for whom they work, so despite often good relations between rival political brokers, cooperation between them is minimal.

Clientelism as Link between Voters and Political Parties 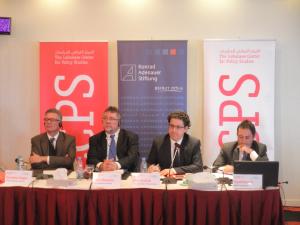 At the opening of the first panel: HE Mr. Christian Clages, The German Ambassador to Lebanon, Mr. Peter Rimmele, The Head of the Rule of Law Program Middle East and North Africa at Konrad Adenauer Stiftung, Mr. Sami Atallah, The Executive Director of the Lebanese Center for Policy Studies and HE Mr. Ziyad Baroud, The former Minister of Interior and Municipalities 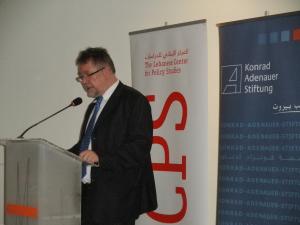 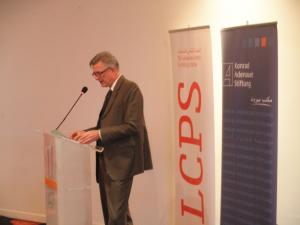 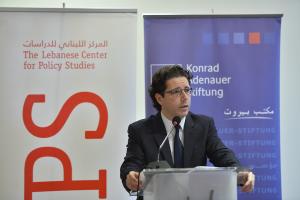 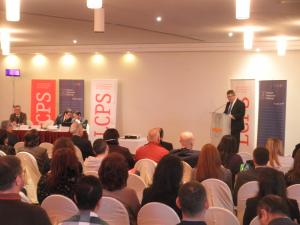