Social Market Economy as a model for the Lebanese case

The Konrad-Adenauer-Stiftung in cooperation with Issam Fares Institute for Public Policy & International Affairs (IFI) organized a conference on the implementation of the German social market economy in real-estate markets and housing policies. The concept was discussed in a Lebanese context, taking into account the real-estate boom and the recently voted law on the liberalization of rents.
November 20, 2014 Ordering Information 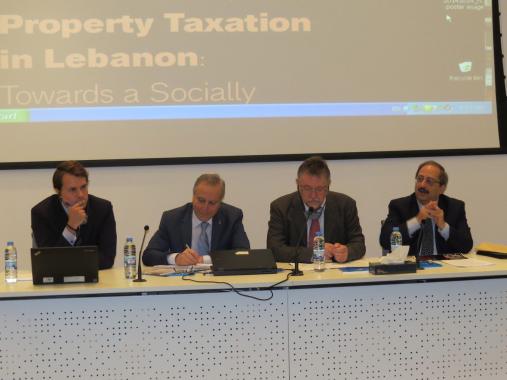 In cooperation with Issam Fares Institute for Public Policy & International Affairs (IFI), the Konrad-Adenauer-Stiftung organized a conference around the German social market economy concept in real-estate markets and housing policies, discussed further in the Lebanese context, taking into account the real-estate boom and the recently voted law on the liberalization of rents. Nine prominent panelists, both from inside and outside the country, gave their insights on the situation where affordable housing continues to decline, while the real-estate sector is booming, during the three sessions at the all-day event held in the IFI building, American University of Beirut.

The first session began with the speech by Lebanese MP Ghassan Moukheiber on the topic of the legislative dimension of housing policy in Lebanon. Moukheiber provided insights on his attempt to reform the housing and rent policies in Lebanon and the challenges faced in the legislature. He noted that the rent laws passed in 1992 have been short-sighted and left the future of both landlords and tenants in jeopardy in light of real estate speculation, urban changes, and the situation of economic stagnation. He argued that the following governments had remained passive to the problem of fair housing and rent, and that there has been no comprehensive approach to this problem.

Ensuing was a speech by Jan-Otto Jandl, PhD candidate at the University of Freiburg, on the account of Housing Policies and Rent Control in Germany’s Social Market Economy. Jandl presented the strain of housing situation in Germany and the impact of possible new rent policy currently debated in the German government circle. Antoine Chamoun, former director of Banque de l’Habitat, subsequently presented the developments and challenges in housing policies and the evolution of the real-estate market in Lebanon. He argued that housing policy is not only the responsibility of the public authorities. Instead it should be based upon a tripartite relation that involves the citizen, the government, and the adequate partners from the private sector.

The second session was opened by Kamal Hamdan, director of the Consultation and Research Institute (CRI), with his speech on the Lebanese real-estate boom and the housing market in Lebanon. Hamdan cited that 72% of total investments in Lebanon are in the real estate sector. However, out of ten apartments sold in Beirut, three are bought by foreigners (mostly Gulf nationals), five by non-residing Lebanese nationals and only two by residing Lebanese nationals. Hamdan furthermore argued that housing policy cannot be one-dimensional as it has social, political, and economic façades. Followed was a presentation by Jan-Otto Jandl on the real-estate taxation in Germany. Upon this, Jandl provided further examples on how German governments attempted to reform the taxation on lands and buildings without dissuading developers to build new homes.

Namir Cortas, president of Real Estate Developers Association Lebanon (R.E.D.A.L), gave an insight on the role of the developers in the housing policy debates and the importance of the property sector for economic growth in Lebanon. He argued that urban planning involves not just developers but also the government and communities; thus the need of a holistic approach to tackle development problems.

The session was closed by remarks from Charbel Nahas, former Lebanese Minister of Labor, on the account of the necessity of land and real-estate taxation in Lebanon. According to him, there is negligible tax on the profit acquired from selling lands. While land-owners are due to pay income taxes when they rent out their properties for housing or commercial purposes, they are exempted from paying any kind of tax in case of sale of the lands, effectively no taxation on the profit made off those lands. Land is no longer seen as a factor of production but rather as an investment tool for portfolio diversification in financial investments. Thus he argued that to regularize the anomaly a reform on land and real-estate taxation is needed.

Lawyer Adib Zakhour presented the legal challenges and shortcomings of the recently passed law on liberalization of rents which, according to him, render it null and void. His remarks were followed by Bruno Marot, PhD Candidate at McGill University, who addressed the issue of whether the removal of rent control would lead to a property-led urban development. Marot posits that current reform contributes to a property-focused style of urban development which is socially unjust in the way it contributes to social and spatial transformations. Marot sees that the reform reinforces a two-track residential strategy and that the evolution of the built environment depends on who the primary beneficiary is between property owners and the real estate industry.

Hisham Ashkar, PhD Candidate at HafenCity University of Hamburg, concluded the last session with his comparison of the different impacts of controlled and liberalized rent laws on the transformation of urban settings. He expressed his disagreement with the pervasive discourses and narratives that the abrogation of the old law on rents will inexorably destroy what is left from Beirut, its residents and its heritage, in face of the real-estate industry dynamics. Ashkar argued that the old rent law proved that it can be easily manipulated by real-estate and capitalistic dynamics. However, the total liberalization of rent also played a rather minor role in the demolition-reconstruction process. He therefore claimed that the abrogation of the old law will not boost real-estate industry, but it will lead to a change in the dynamics of urban transformation in Beirut.

The event was attended by more than one hundred and twenty participants from various backgrounds, ranging from university lecturers, experts, lawyers, to students and individuals from Lebanese community. In the subsequent Q&A periods following every session many questions, remarks and critics were voiced and addressed. During the coffee and lunch breaks participants had the opportunities to enquire the matter further and mingling with panelists as well as with other participants.