The death of the African American George Floyd has shocked many observers worldwide, who did not discuss racism as it doesn’t affect them personally. Not only in the US, but also in Germany, the United Kingdom, Belgium and France did people take to the streets to protest against racism in their respective societies. But how have the events in Minneapolis and subsequent demonstrations in over 50 cities in the United States, where black people protested and put racism on the Agenda, been reflected in Africa, the continent of predominantly black people?
June 24, 2020 Ordering Information

How did society in South Africa – which is still deeply divided along racial and economic lines – deal with events that brought back memories of the Apartheid past? How did intellectuals in Nigeria, the most populous African country react? And what would Ugandans say, whose country was once described by the then journalist Winston Churchill as the Pearl of Africa and whose long-time president Yoweri Museveni is an admirer of the man whom many people hold responsible for furthering racism in the US - President Donald Trump.

We have asked for three contributions from South Africa, West- and East Africa. The outcome is as checkered and diverse as the continent with its 54 countries. In the case of South Africa, an apolitical society is still avoiding some painful insights into their its racism issues. Whereas in Nigeria and Uganda the events in Minneapolis triggered less a debate about color and discrimination, but about the general mistreatment by the security forces.
The Media Programme Subsahara Africa, based in Johannesburg, would like to thank our colleague Shoks Mzolo, the KAS-Media-Africa scholar Aanu Adeoye from Nigeria as well as the former KAS-scholar Ivan Okuda in Uganda. Their quick and thoughtful analysis made this paper possible. 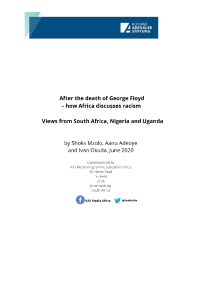