The members of the Asia News Network (ANN) Board met for their annual board meeting to discuss future developments of the network. The conference was organised in cooperation with the local ANN member "Rasmei Kampuchea".
April 28 - May 01, 2013

The keynote address for this year's board meeting of the "Asia News Network" (ANN) was delivered by Om Yin Tieng, Senior Minister and Chairman of the Human Rights Committee of the Cambodian government. In his speech, the Minister highlighted the role of Cambodia as a member country of ASEAN. During the subsequent press conference with the editors and publishers of the "Asia News Network" (group picture), Om Yin Tieng commented extensively on the challenges in the fight against corruption in Cambodia. During a public conference with some 150 high-ranking guests from Cambodia, the ANN representatives discussed the political participation and the media usage behavior of young people in Southeast Asia with regard to the upcoming elections in Cambodia, Malaysia and the Philippines. Within the ASEAN community, the so-called „Generation Y“ marks the vast majority of the population.

A day earlier, editors and publishers of ANN had met with the representatives of many Cambodian media outlets to talk about starting a publishers' association for the Southeast Asian country. The initiative for the association goes back to a proposal by the "Club of Cambodian Journalists" (CCJ). Pen Samitthy, the President of the longstanding KAS-partner, is also editor-in-chief of the daily newspaper "Rasmei Kampuchea". Since 2006, Rasmei is a member of the "Asia News Network". The KAS office in Cambodia supports the founding process of a publishers’ association as an advisor.

The "Asia News Network" consists of 22 newspapers from 19 countries in Asia. Since its founding in 1999, ANN is a partner institution of the regional KAS Media Programme Asia, which is based in Singapore. 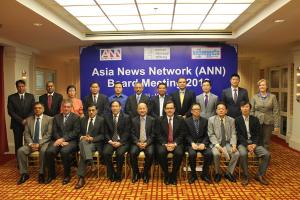