It is the most serious crisis in the Bulgarian media landscape for a long time. For several days, the Bulgarian National Radio rules the headlines. The temporary transfer of a longtime presenter shows the political influence on the work of public service broadcasting in Bulgaria. The protest of colleagues and listeners, however, shows the awareness of being able to defend against it.
September 25, 2019 Ordering Information

Public service media in South East Europe are more and more associated with closed tights to the government and are under the criticism of the public. In the spring of this year, citizens in Serbia, Montenegro and Croatia took to the streets (see KAS country report “Public Service Media Under Crossfire by Protest Movements”, March 2019). On Friday, September 13, protesters gathered in front of the building of the Bulgarian National Radio (BNR) in Sofia as well. The trigger was the short-term suspension of the journalist and longtime anchor Silvia Velikova the day before. Instead of moderating her morning programme on “Horizont”, the information channel of BNR, she had to take over other tasks at the station at disposition of the new Programme Director Nikolai Krastev, who had just been in office one day. Velikova is known for exposing corruption scandals and is considered a critical journalist who also asks uncomfortable questions. Thus, she had regularly reported very critical about the planned appointment of Ivan Geshev as Public Prosecutor. He will be appointed in October without an actual election, since there has not been another candidate. Against this decision, there have been public demonstrations in Bulgaria's capital Sofia for weeks.

Radio had to suspend transmission for five hours

After Silvia Velikova was deprived of the moderation of her programme, the BNR management tried to find a substitute presenter for running the morning programme – but without success. Her colleagues started to protest. As a result, BNR was forced to stop broadcasting its main programme “Horizont” for five hours in the morning; for the first time in the history of the station. Officially, the BNR management justified this with technical maintenance work on the transmitter.

For many, however, this explanation was too obvious and simply a lie. Journalists and listeners gathered in front of the BNR building to protest this practice. Even Prime Minister Boyko Borissov intervened. Bulgarian media reported that he called Velikova and promised her his support. After that it happened very fast: Velikova got her programme back. However, she has to moderate it together with a colleague. This should ensure more pluralistic views, so the reasoning of management. However, this decision wasn’t made by the previously newly appointed Programme Director Nikolai Krastev. He announced his resignation and apologised for his inexperience in handling such management processes.

This would have been one of the most remarkable events in the history of the traditional Bulgarian National Radio, but since then more and more details have come to light. The headlines in the Bulgarian press are continuing. The pressure on the management is increasing.

The Public Prosecutor's Office has now started an investigation. By law BNR is not allowed to stop the broadcasting, as this would endanger the national security. The investigation involved the National Agency for National Security (DANS), the Council for Electronic Media (CEM) and the Communications Regulation Commission (KRS). Ironically, all this happened under the direct supervision of Ivan Geshev in his capacity as deputy Public Prosecutor.

The investigative commission came to the conclusion that BNR should not have ceased broadcasting. Technical maintenance was not the real reason. A fine was imposed on BNR – the amount is still not set. But for BNR's journalists, this was not a sufficient consequence for the management's actions.

In particular, the unclear role of BNR Director-General Svetoslav Kostov is brought now increasingly to the fore. The editorial board of BNR called for the dismissal of the Director General by CEM, as – BNR editors see no longer a cooperation possible. Kostov had been elected to office only three months ago and had replaced the former director Alexander Velev, who was seen in political circles as too critical and self-confident.
Silvia Velikova told the investigative commission that Kostov had told her before the events of September 13 that four people had called him and demanded her release. He and his family had been threatened if he did not comply with the demands. Who those people were is unclear. In an open letter, Kostov dismisses the allegations that he has influenced media freedom. According to him if necessary, he would fight for his rights in court.

Next Friday (27 September), CEM, which is also responsible for the election of the director general, is going to meet again and possibly decide on Kostov's dismissal. Previously, BNR journalists and various NGOs called for a demonstration in front of the BNR building on 26 September.
The calls for a new broadcasting law and a new procedure for the election and composition of CEM, whose five members are currently appointed by the Parliament and the President, are also becoming louder.

The idea of merging BNR with the Bulgarian National Television (BNT) is also being heard again. So far, both operate independently of each other with different management boards and budgets – a construct in public service media which only exists in Bulgaria and Romania in this separate form in South East Europe. Critics warn, however, that in case of a merger, BNR will lose its – compared to television – more independent status and the ability to report more freely.

The current BNR scandal casts another shadow on the already difficult media situation in Bulgaria which is ranked 111 out of 180 in the current press freedom ranking of "Reporters Without Borders" and thus at the low end among the EU countries. Trust in public service media, which according to a recent opinion poll of the KAS Media Programme South East Europe in Bulgaria is lower than in private television and radio stations, will continue to dwindle with the current developments with BNR. Already now – according to the survey – about 70 percent of respondents say that the public service media are not free of political influence.
It is obvious that democratic institutions are weakened and the decisions are taken elsewhere. The fact that the management of a public broadcaster is suspending a critical journalist under pressure from outside and that the Prime Minister gives the impression of being able to undo this with a telephone call speaks about an imbalance in the democratic structures.

However, this case also shows that there are still journalists who take their role as a critical and controlling authority in a democracy seriously, advocate it loudly and defend themselves against outside influence. 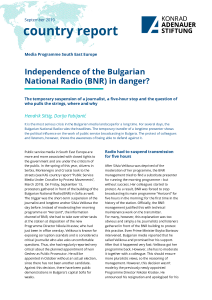 Independence of the Bulgarian National Radio (BNR) in danger
Download