Opinion poll by the Media Programme South East Europe of the Konrad-Adenauer-Stiftung and the Research Centre “Trend”
December 16, 2020 Ordering Information 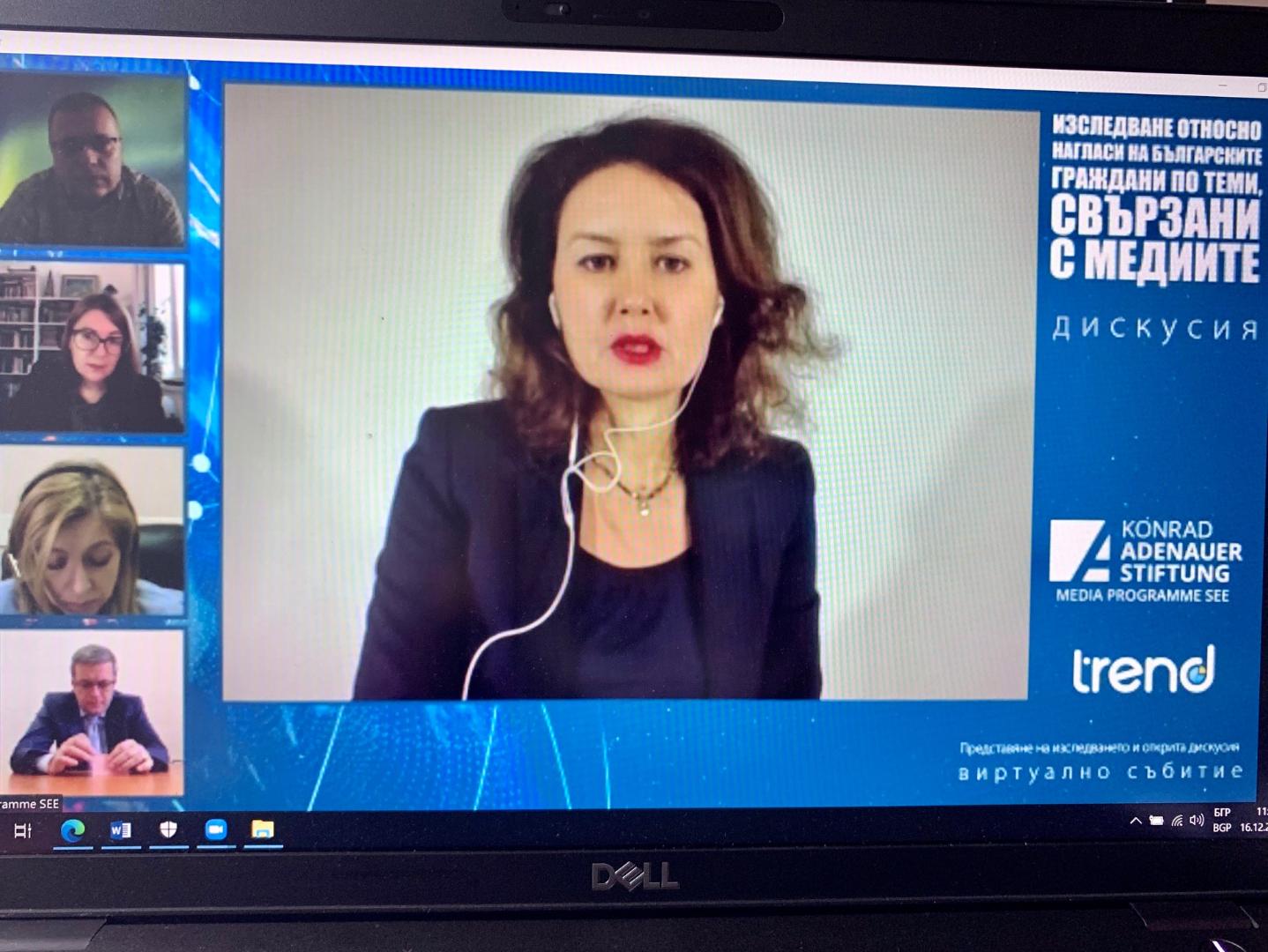 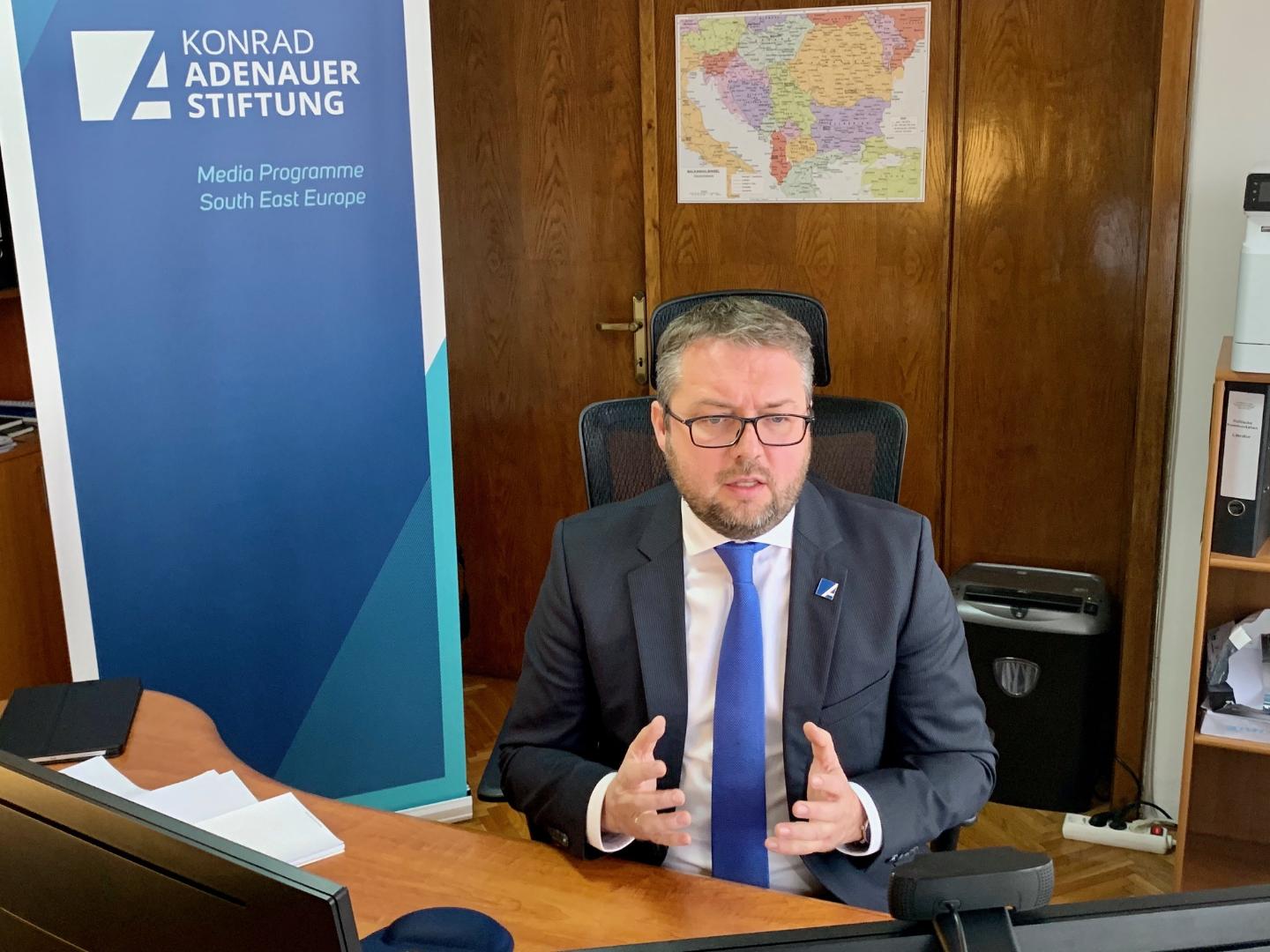 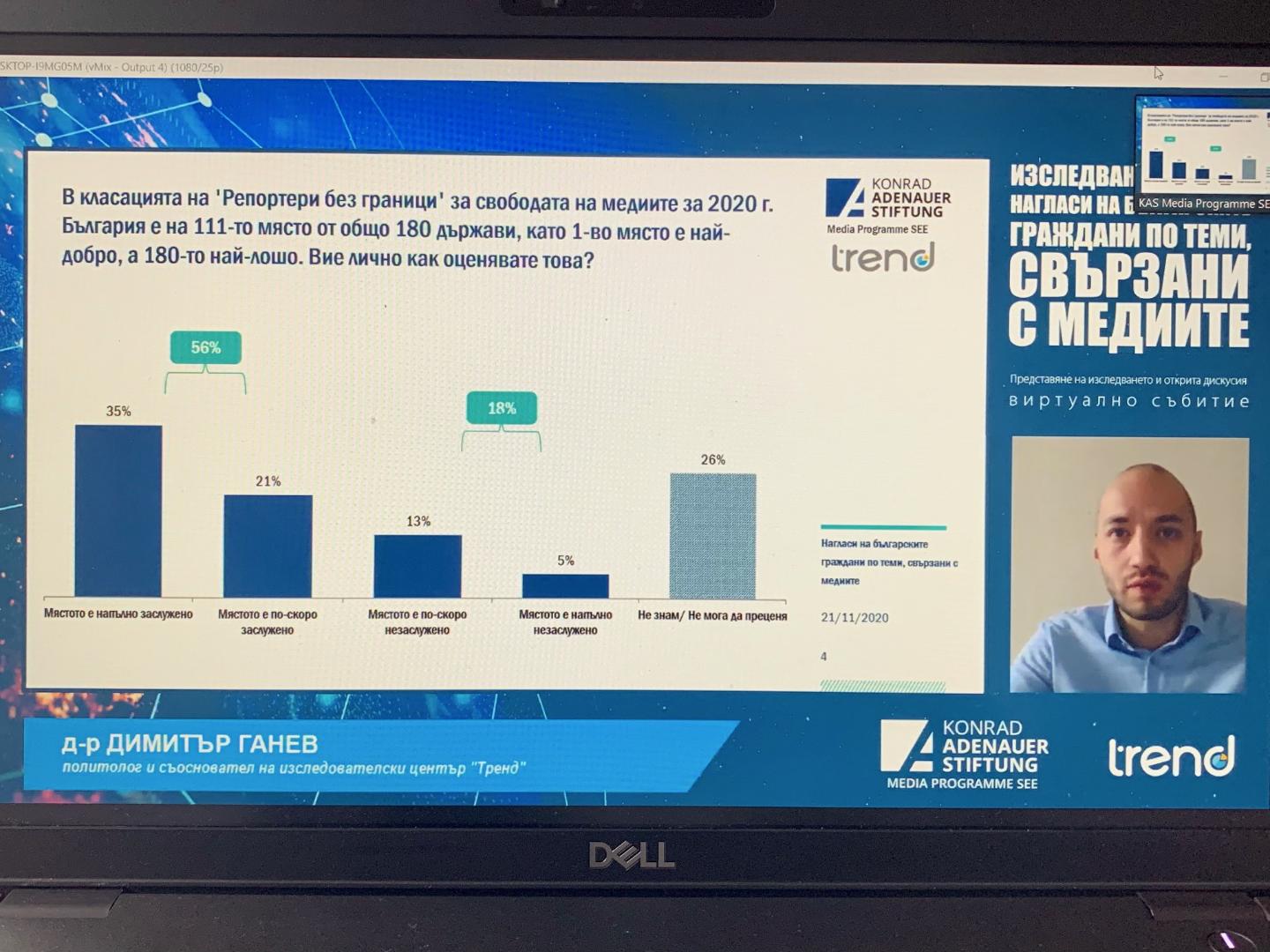 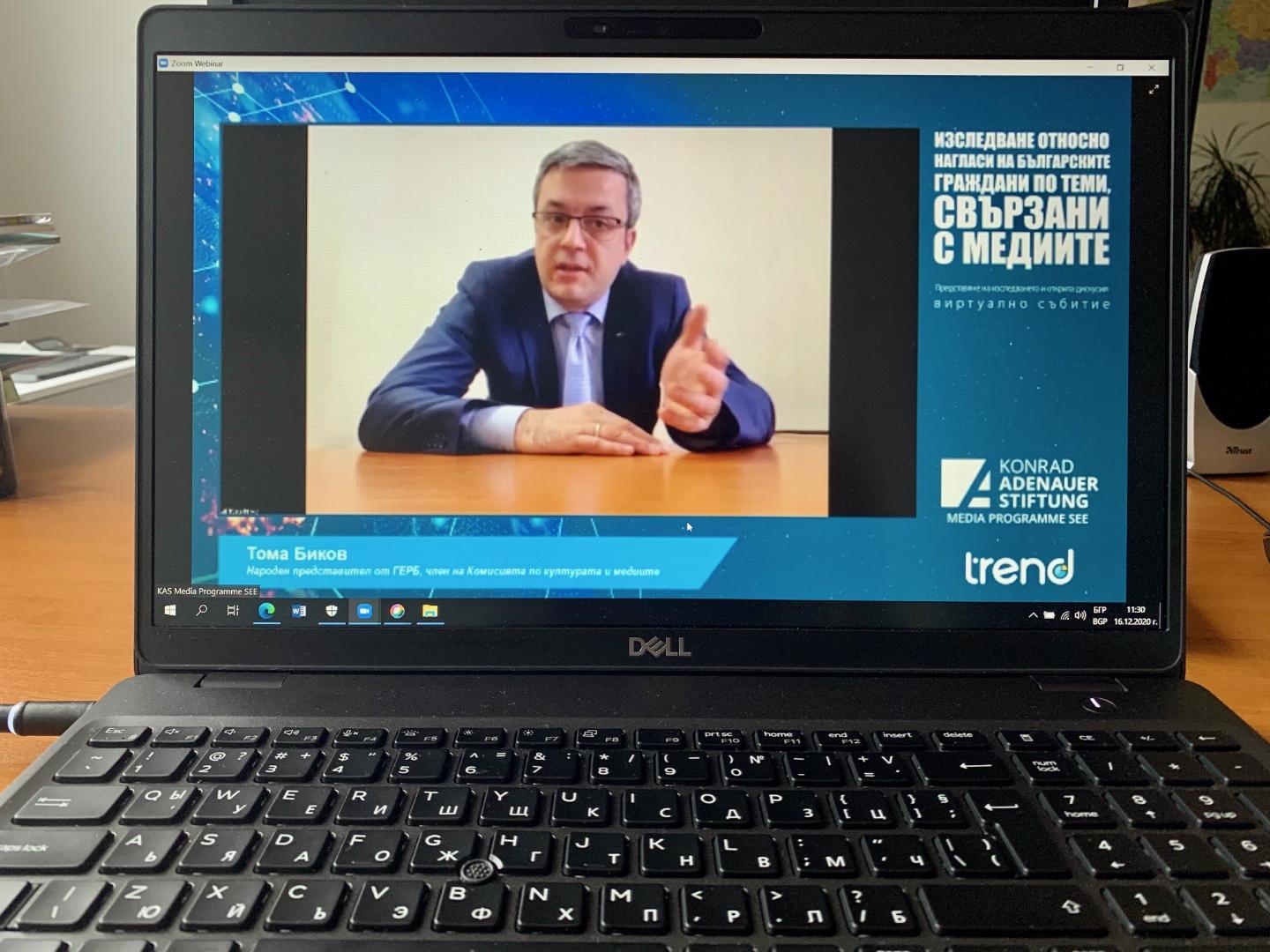 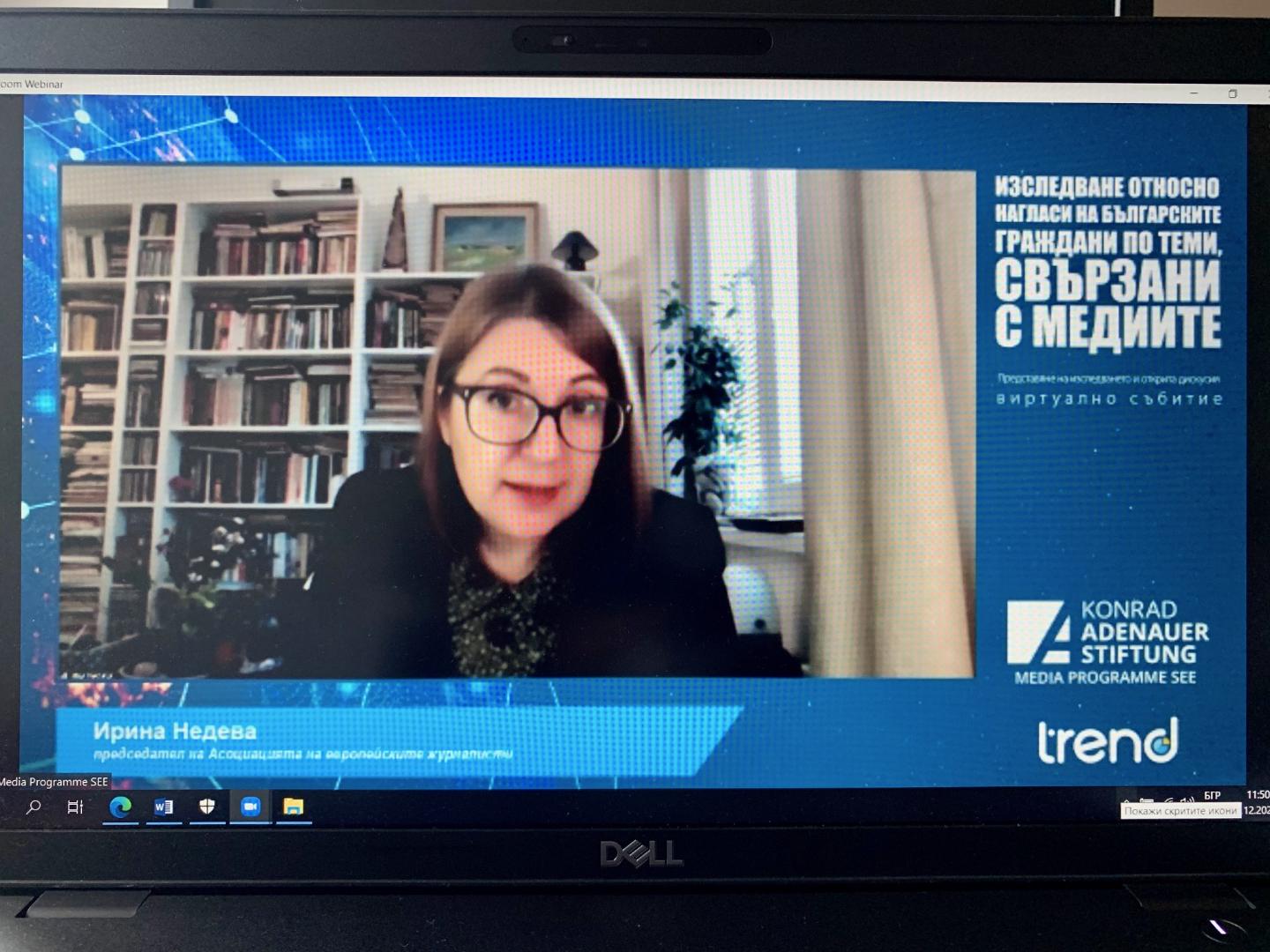 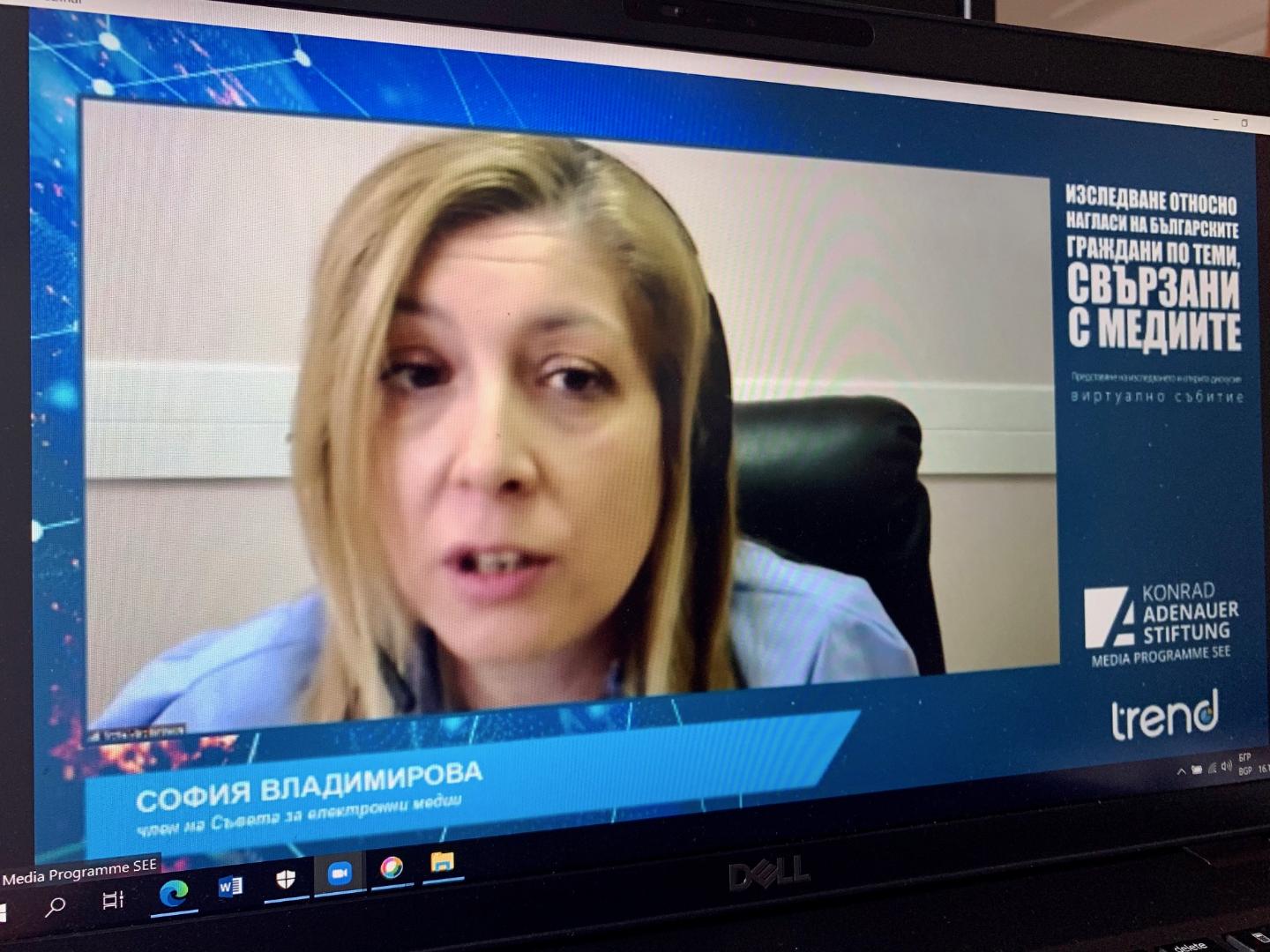 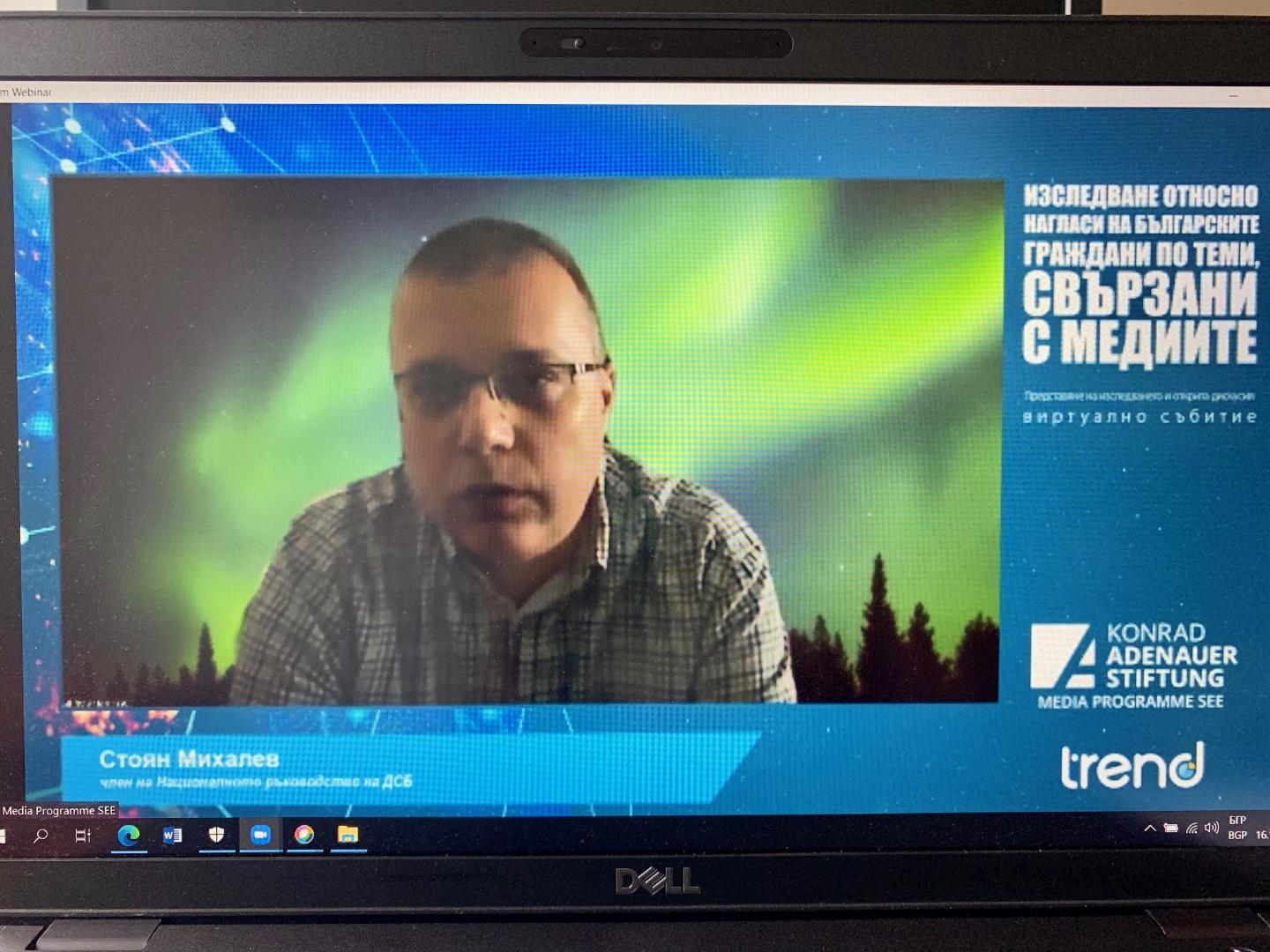 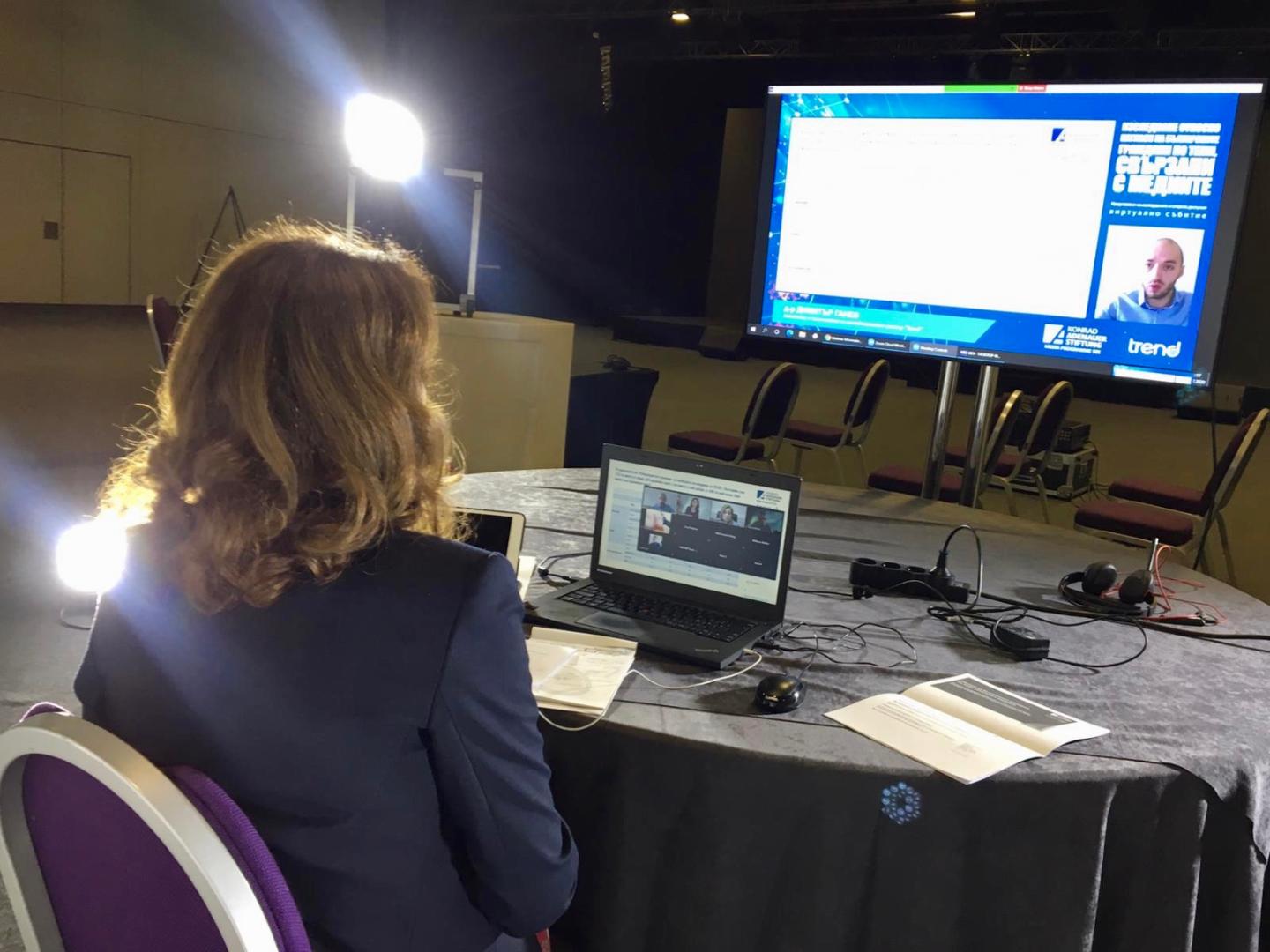 The majority of Bulgarians are convinced that Bulgaria's poor ranking in the Press Freedom Index of “Reporters Without Borders” is justified. In addition, citizens' confidence in the journalistic work continues to decline and the private TV stations are the most popular source of information for Bulgarians. These are the main results of a nationwide survey commissioned by the Media Programme South East Europe of the Konrad-Adenauer-Stiftung (KAS) and conducted in November by the Research Centre “Trend”.

More than half of Bulgarians (56 percent) think that the country's 111th place in the Press Freedom Index of “Reporters Without Borders” is deserved. Only 18 percent are of the contrary opinion. The high percentage of respondents who believe that the place is deserved indicates a low level of trust among Bulgarians in the media as a whole. The general lack of trust is also reflected in the question of whether the recent events have changed trust in journalistic work. Although the majority of respondents stated that there is no change according this indicator nearly one third of the respondents (28 percent) have lower trust in the media, and only 8 percent higher.

Hendrik Sittig, Head of the KAS Media Programme South East Europe: “In a democracy, citizens must be able to trust the media. This requires that there is a consensus in the society that independent quality journalism is important and that it must be supported. Therefore, all socially relevant groups in Bulgaria, especially politicians, should stand up for press freedom and better working conditions for journalists.”

The majority of respondents use private TV channels to inform themselves. 61 percent answered that they obtain information concerning the current health crisis from these channels. The results are similar for those who are seeking information about political issues. The private TV channels are followed by the public television BNT (46 percent), social networks (37 percent) and news internet portals (31 percent). The radio channels play only a minor role as a source of information. Taking a look at the age distribution, a more differentiated picture emerges in terms of the TV channels. The senior viewers tend to watch more public television out of their traditional habits. In comparison, the younger viewers watch more private TV channels. This usage behaviour is also reflected in the trust values towards media. Bulgarians have the highest trust in private TV channels (54 percent). The survey was conducted by the Bulgarian Research Centre “Trend”. The sample (1,001 respondents) is representative nationwide.

The findings of the opinion poll have been presented on 16 December by Dimitar Ganev, Managing Director of “Trend”, during an online discussion organised by the KAS Media Programme South East Europe. Afterwards, Toma Bikov (GERB MP and Member of the Parliamentary Committee for Culture and Media), Sofia Vladimirova (Member of the Council for Electronic Media), Stoyan Mihalev (DSB Board Member) and Irina Nedeva (Chairwoman of the European Association of Journalists – Bulgaria) discussed the current media situation in Bulgaria. Kristina Baxanova, Head of the foreign news department of the Bulgarian private television channel bTV, moderated the debate.

Hendrik Sittig, Head of the KAS Media Programme South East Europe, commented the lack of public awareness for quality journalism as the main reason for the mistrust and the bad media situation in Bulgaria: "There is no atmosphere in which independent journalism is supported and strengthened. I often have the impression that journalists are perceived as disruptive factors. That is - I say it quite clearly - wrong. A democracy cannot exist without independent journalism".

During the presentation of the survey results, Dimitar Ganev, "Trend" Managing Director, focused on the question of Bulgarians' trust in the media as well as on the extraordinary situation in which not only the media and politics, but also every single individual found themselves this year. He said that the further decline in trust in the media could be explained by a chronic mistrust that has been present for a long time: "If the citizens basically have no or very little trust in the media here in Bulgaria, it is not surprising that we are confronted with such unpleasant results and a further decline in this regard." Sofia Vladimirova, Member of the Council for Electronic Media, also highlighted the extraordinary and, above all, dynamically changing new reality in which the media find themselves. She made it clear that it was necessary to adapt to the current situation and to carry out a fundamental reform in terms of regulation and legislation: "We need new legislation that is up-to-date and, above all, future-oriented. Its spectrum should cover all areas of the media. A legislation in which the media are strengthened and supported." According to her not only legal regulation is needed, but also an increased awareness of media issues in society.

Toma Bikov, GERB MP and Member of the Parliamentary Committee for Culture and Media, also commented on the existing difficulties in legal media regulation. He pointed out that it is not possible to implement a new effective legislative reform within a short period of time and that it is a complex and time-consuming process. In his view, it is also particularly challenging to find the right level of legal media regulation that can be exercised by politicians: "It is difficult to carry out a radical reform. Politicians often find themselves in the middle of a conflict of interest between journalists and media owners." The media are part of the political debate and media owners should also actively participate in it.

With regard to the promotion of a civil society that thinks critically and supports quality media, Stoyan Mihalev, Board Member of the political party "Democrats for a Strong Bulgaria" (DSB), considered the situation critical. In Bulgaria, he said, there is no strong civil society that makes demands on politics and the media, that works to expose grievances and actively seeks solutions: "I don't see a big difference between the past and the present. It is fairly common for the media not to represent the interests of the citizens, but to act as an elongated hand of the government. This has already become a tradition in our country."

Irina Nedeva, Chairwoman of the European Federation of Journalists for Bulgaria, saw the hostile attitude and often rude tongue of many politicians in their interaction with journalists as a key problem: "Politicians can and should do something to improve the situation of the media in Bulgaria. There must be dialogue. Unfortunately, this dialogue is not happening lately. Questions are not asked, there is only one-way communication, often via social media".

All participants agreed that the upcoming year might be again challenging for the media, especially in terms of the next elections 2021 in Bulgaria. In these elections, the media would have an even more important and responsible role than usual, as due to the Corona pandemic, a traditional pre-election period with personal contact and exchange between citizens and candidates would not be possible, except through the filter of the media and media coverage.