Democracy cannot exist without free media. Journalists must be able to work independently – without political or economic influence or any other reprisals. This is also a recognition of the terrible history of the Second World War and the totalitarian rule of the National Socialists over a huge part of Europe. For this reason, public service media were established in (West) Germany after 1945 after the model of the BBC. It was without question a gift for Germany and its democratic development.
November 1, 2019 Ordering Information

Public service media – in Germany as well as in other European countries –
have a legal task. They are exclusively committed to the welfare of all and must
not unilaterally support a party, organisation or any other type of grouping.
Its programmes should inform, educate, advise. They can and should also
entertain. Its contents, whether on television, radio or online, still stand for
seriousness and credibility. Despite all doubts, trust in public service media
remains high in many countries. This is confirmed by regular opinion polls
across Europe. In almost all countries in which the European Broadcasting
Union (EBU) is represented, the public broadcasters are ranked in the first
place. But this trust is not self-evident. Even public service media must always
face social and, above all, technical developments, reflect repeatedly on its
foundations and mission and find answers in the democratic discourse.
This book gives an overview of public service media in South East Europe;
referring to the ten countries, which the Media Programme of the Konrad-
Adenauer-Stiftung covers. From Croatia to North Macedonia and Bulgaria to
the Republic of Moldova, liberalised media markets have emerged following
the collapse of socialism and its state-controlled media systems. State
broadcasters have become public service media. For the first time, essential
information about individual public broadcasters is being gathered. Media
experts from the respective countries write, among other things, about
the history, the legal framework, the financing model and organisational
structures in place. The chapters are supplemented with the results of a recent representative opinion poll commissioned by the Media Programme
and conducted by the research institute Ipsos. We have asked the same six
questions in all ten countries. In the results summarised for the entire region,
two answers are very clear: almost 70 percent of respondents say that public
service media are important for democracy. Unfortunately, almost 65 percent
see these channels under political influence. In South Europe, in particular, this
discrepancy becomes visible and audible at demonstrations when people take
to the streets against their government. Then usually public service media are
focus of protests and have been criticised as mouthpieces of the government.
As a Media Programme, we want to strengthen the role of free and
independent media and improve the work opportunities for journalists.
Freedom of the press and expression are central pillars of democracy. Here in
South East Europe, we accompany the process of transformation – towards a
united democratic Europe. In doing so, public service media play an important
role. I am convinced that if public service media do not exist, one should
invent them. They are essential for democracy – if they can act free of political
influence and are well funded to fulfil their tasks. 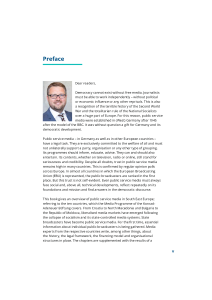