by Hendrik Sittig
Upon the invitation of the KAS Media Programme SEE more than 20 media law experts from South East Europe and Germany met and discussed the legal framework of public service media (PSM). During a workshop on 8th October in Tirana, they prepared recommendations for more effective and politically independent composition of the supervisory boards as well as for better funding of PSM in the future. The KAS Media Programme wants thereby and with its upcoming projects to set an impulse for possible reforms of the public service broadcasting systems in South East Europe.
December 17, 2019 Ordering Information

Supervisory boards as a mirror of the society: The broadcasting boards should reflect the society in the respective country. In this context it is recommendable to increase the number of members to 20-25 persons. They should be representatives of organisations relevant for the society. This guarantees a large and independent range of views. However, the members should not lobby for their sending organisations, but rather serve the public interest.

Reduce political pressure and ensure independency: The participation of state and party affiliated members should be possible, because parties also belong to the organisations important for the society. However, their number should be limited. In Germany – according to a decision of the Federal Constitutional Court – the quota of the state and party affiliated members should not exceed one third of all. This appears to be a possible model for South East Europe.

Better regulated member selection: The members should be appointed directly by the socially relevant organisations. A selection by the parliament or appointment through a state institution should be avoided, because this could lead to political influence. The members should be elected for a maximum of six years, with the possibility of being re-elected once. They should prove civic engagement and media understanding through their activities so far, especially for the mission and principles of public service media. However, the members should not have a current job position in the media sector in order to avoid conflict of interest.

Members‘ responsibilities and rights in line with the PSM basic principles: The administrative work of the broadcasting boards should be regulated by rules of procedure. Key points could be among others: A minimum of 60 percent of members should be present for a quorum. They should be allowed to receive compensation for the attendance in the board meetings and their travel expenses, but this does not imply a membership salary. The meetings should be open for the public.

Less financial dependency: The financing through licence fees should be basically preferred. Only this type of direct financing by the media users guarantees independence from the state and facilitates the awareness that public service media functions as an advocate for the people. However, according to a current opinion poll of the KAS Media Programme SEE, this financing model is the least popular. Only about 10 percent of the interviewees in South East Europe are in favour of the licence fee model. In this respect, by choosing such kind of funding it is particularly significant to raise awareness to the mission and advantages of the public service media and to underline their essential role for the society.

Funding from the state budget is also possible, though the risk of state and political influence is high. Therefore, this type of financial support requires regulations, which diminish this risk in the broadest possible sense. This could be for example to stipulate a fixed percentage from the annual state budget.

More financial awareness for quality journalism: Above all, the public service media should according to its mandate be a source for reliable and objective news coverage. Quality journalism needs sufficient funding though. In this sense, it is important for the broadcasters to be provided with a budget, with which they can fulfill their duties imposed by law.

More international exchange: A regular regional exchange between public service broadcasting institutions gives the opportunity to agree on current developments and issues as well as potentially to find joint solutions. This applies not only for the two topics that are subject of this paper – boards and financing. As superior authority of the public service media in Europe, the European Broadcasting Union (EBU) would be the counterpart in question to take a leading role in initiating and organising such regular meetings. The support by other internationally active partners, for example the KAS Media Programme, is recommendable.

You can read more information about the workshop in the event report. The recommendations were developed and based on discussions and expertise of all present participants of the Article-10-EMRK working group, joining the workshop in Tirana from eleven different countries.

The Article-10-EMRK working group is led by:

- Prof. Dr. Johannes Weberling, Head of the Department of Media Law at the Viadrina European University in Frankfurt (Oder) 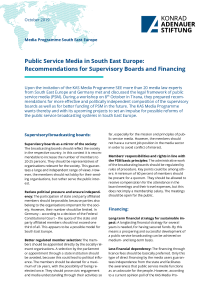