by Dr. Olaf Wientzek, Sarah Ultes
Public focus is currently concentrated on the coronavirus crisis, but the plight of refugees is, as ever, an urgent global problem. On 18 June 2020 the UNHCR (UN High Commissioner for Refugees) presented its new Report on the trends affecting refugees around the world. Here are some of its key findings.
June 25, 2020 Ordering Information

1. The number of refugees rose sharply in 2019: at the end of 2019, a total of 79.5 million people were forcibly displaced worldwide, representing just over 1 % of the global population. Of this number, approximately 30-34 million were children. The percentage of internally displaced people was 57.5%. 20.4 million were refugees under the UNHCR mandate; added to this are 5.6 million under the mandate of the United Nations Relief and Works Agency for Palestine Refugees (UNRWA), 3.6 million  Venezuelans displaced abroad and 4.2 million asylum-seekers. In 2019, 754,000 people were stateless. Overall, the figures show a clear increase in comparison to the previous year (70.8 million). Some of the main hotspots in 2019 were Syria, Venezuela, the Democratic Republic of the Congo, Yemen and Burkina Faso.

2. An increase in both relative and absolute numbers since 2010: dramatic changes have evolved since 2010: displacement is no longer a passing phenomenon. In absolute figures, the number of refugees has almost doubled since 2010 (from 41.1 million to 79.5 million), but in relative figures too, the period saw an increase in the percentage of the global population affected from 0.6% (2010) to 1%.

3. The causes: wars and conflicts are significant drivers of these developments, especially those in Syria, South Sudan, Ukraine, Afghanistan, Iraq, Libya and Somalia; the humanitarian crisis in Yemen and the political and economic catastrophe taking place in Venezuela have also played their part. To an ever greater extent, the consequences of climate change such as seen in the Sahel region are amongst the main reasons why people flee. The UNCHR estimates that this tendency will continue to grow. Many refugees live in countries threatened by acute food insecurity, malnutrition and climate change.

4. Most refugees remain within their region: 73% of refugees find sanctuary in a country bordering their own. If one includes the large numbers of internally displaced persons, refugees leaving their native region make up only a small share of the total. The number of internally displaced people rose exponentially over the last decade, from 15 million in 2010 to 43.5 million in 2019. Columbia had the largest number, nearly 8 million, followed by Syria (6.6), DR Congo (5.0), Yemen (3.6) and Somalia (2.6). Six of the ten most affected countries were in sub-Saharan Africa.

6. The main host countries: In absolute figures, Turkey is the most heavily affected country, with 3.6 out of 24 million refugees; it is followed by Columbia (1.8), Pakistan and Uganda (1.4 each). Thus, 15% of refugees are in Turkey, whilst in 2019 the EU member states (which then included the United Kingdom) together sheltered roughly 11.4%. The countries and territories with the highest percentage of refugees relative to the total population were Aruba, Lebanon, Curaçao and Jordan; also Turkey, Columbia and Uganda.

7. The EU has been significantly affected, but not above the average: there was a total of 2.7 million refugees in the EU in 2019. This corresponded to roughly 0.5% of the population of EU Member States, below the global average (1%). UNHCR figures put the number of applications for asylum in EU Member States at 890,000, just 21.4% of global applications.

8. Is Germany the EU's major host country? Yes and no; with 1.1 million UNHCR refugees, Germany is once again at 5th place in the group of global host countries. This makes it the EU country with the highest absolute figure. However, the picture is different when the calculation is made of refugees per inhabitant. In that case, Sweden, Malta, Austria and Cyprus have higher ratios. In 2019, the countries processing more asylum applications per inhabitant than Germany were Cyprus, Greece and Malta. Between 2010 and 2019, Germany, with 2 million, was the most preferred destination of asylum-seekers, ahead of the US’ 1.7 million applications, France (0.7), South Africa and Turkey (0.6 each).

9. The burden is unevenly distributed: there are massive differences between some states and world regions. A total of ten countries provide shelter for 54% of all the refugees in the world (not including internally displaced people). Moreover, the least developed countries shoulder the greater burden: they have taken in 27% of all refugees despite making up only 13% of the global population. Overall, commitment to resettle recognised refugees (26 states offered a total of 107,000 places) is far below the required need (1.4 million). Canada, the US and Australia offered the most places. Western Governments paid the largest proportion of funds to the UNCHR: this meant the US paid 40.9%, the EU and its then Member States just over 35%, and Japan approximately 3%.

10. The consequences of COVID-19: The COVID-19 pandemic will affect the number of refugees registered. The number of asylum applications registered in the EU in March 2020 fell by 43% in comparison to the previous month. In numerous countries, registrations of refugees decreased noticeably. For 2020, the UNCHR is assuming a significant number of unrecorded cases 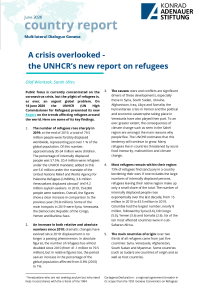