Supreme Court Lecture Series: The Impact of the Constitutional Court on German Democracy

This lecture is organized by the Konrad-Adenauer-Stiftung in cooperation with the Supreme Court of the Philippines and the Philippine Judicial Academy
May 7, 2009

Chief Justice Reynato S. Puno, Associated Justices of the Supreme Court and the Court of Appeals, German Ambassador Christian-Ludwig Weber-Lortsch, KAS Country Representative Klaus Preschle, as well as, 300 representatives of the judiciary and academe attended the first Distinguished Chief Justice Puno Lecture Series, Series of 2009 on the Impact of the Constitutional Court on German Democracy last May 7 at the Court of Appeals.

The event was part of the lecture series organized by the Konrad-Adenauer-Stiftung with activities in Tagbilaran City, Bohol, Cebu City, and Cagayan de Oro City. More than 600 judges, lawyers, representatives from the judiciary, the academe, media, and government attended the four events on experiences with German constitutional democracy. Guest lecturer was Prof. Dr. Rudolf Dolzer from University of Bonn who got invited from Chief Justice Reynato S. Puno with the support of the Konrad-Adenauer-Stiftung. In his closing remarks the Chief Justice praised KAS for its decade-long support for the Rule of Law and democracy in Asia.

Chief Justice Reynato Puno said that “it is never easy to strike a balance of powers in government - between and among the executive, the legislative and the judiciary - in protecting constitutional rights.” According to the Chief Justice, "there is no magic formula in striking this balance, for the balance will be influenced by our own history, by our political maturity and by our economic needs and development." He ended his speech by urging the audience to “not be imprisoned by the past and open our eyes to the best practices of the present, so we can look for a better constitutional future.”

The lecture on “Sixty Years Basic Law of Germany – Impact of the Constitutional Court on German Democracy” held at the Court of Appeals Auditorium on May 7, organized by the Konrad-Adenauer-Stiftung, the Supreme Court of the Republic of the Philippines, and the Philippine Judicial Academy, is part of the world-wide celebration of Germany’s Basic Law. This lecture attended by over 300 justices, judges, court administrators and officials, college of law deans, and lawyers and linked via video conference to the Supreme Court Session Hall, Baguio city and Royal Mandaya Hotel, Davao city.

In his lecture, Prof. Dolzer discussed the powers of the German Constitutional Court and the structure of rights under the Basic Law of Germany. He explained the processes in Germany’s Constitutional Court and in the Budestag or the German Parliament – elections, roles and functions, to name a few. He also mentioned the extensiveness of the roles of the political parties in Germany.

In celebration of the 60th anniversary of the Basic Law, German Ambassador to the Philippines, Mr. Christian-Ludwig Weber-Lortsch, delivered a message at this lecture. He stated that the German-Philippine relations go way back to the 1800s. The first German consulate was established by Chancellor Otto von Bismarck over 140 years ago. The “Deutsche Klub” (German Club) was founded as early as 1906. In 1955 the first diplomatic relations between the two nations were established. He hopes for stronger ties between the two countries.

Mr. Klaus Preschle, Country Representative of the Konrad-Adenauer-Stiftung, welcomed the participants. He shared that the foundation’s name giver, Konrad Adenauer, exactly 60 years ago headed the constitutional commission, which drafted this widely accepted constitution. This year, the Konrad-Adenauer-Stiftung celebrates the 60th anniversary of this successful German constitution, the Basic Law, and its impact on German democracy.

The reactors for the lecture were College of Law Dean Marvic Leonen and Professor Raul Pangalangan of the University of the Philippines. According to Dean Leonen, Germany’s Constitutional Court can entice the constitution of the Philippines. He stressed that greater dialogue should be more available in our country. 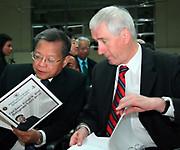