The Regional Program Political Dialogue South Mediterranean of Konrad-Adenauer-Stiftung organises, on 18 March 2021 at 3 PM CET, an online seminar entitled "UNITAMS in Sudan’s Shifting Transition". The virtual event will discuss the opportunities and challenges facing UNITAMS in light of Sudan’s fragile stability and of current shifts in domestic and international political alignments. The panel will put in conversation specific aspects of UNITAMS’ mandate with some of these recent shifts.
March 18, 2021 15:00 Clock

The United Nations Integrated Transition Assistance Mission to Sudan (UNITAMS) is scaling up its operations following the appointment, on 7 January, of Volker Perthes as Special Representative for Sudan of the UN Secretary General and head of UNITAMS. He leads a mission tasked with providing support to the Sudanese government at a time of extraordinary challenge for the country. A political transition which began in 2019 with the ouster of President Omar al-Bashir is proceeding haltingly as Sudan faces a deep economic crisis, violence in the peripheral regions of Darfur and the East, and recurrent tensions between leading figures of the transition.

UNITAMS’ mandate is extensive. The mission is expected to assist Sudan’s political transition, democratic governance, protection and promotion of human rights, and the emergence of sustainable peace; with supporting the implementation of peace agreements; with assisting peace building and civilian protection in Darfur and the states of Southern Kordofan and Blue Nile; and with supporting in mobilizing international assistance to Sudan.

Perthes’ appointment comes as the political equilibrium of Sudan’s undergoing profound changes. The signing last year of the “Juba peace agreement” between the government and armed groups from Darfur, Southern Kordofan and Blue Nile has brought into the transitional institutions leaders of armed groups from peripheral regions, chipping away at the power of central elites that have ruled the country since independence. The 3-year long transition has been extended by a year, allowing General Abdelfattah al-Burhan to remain as de-facto head of state until 2022.

The regional and international map is also changing. Following delays in the removal of Sudan from the list of State Sponsors of Terrorism, the United States has moved to normalize relations and emerged as the largest supporter of the transition, thanks to a $1 billion bridge financing scheme with the World Bank. The Sudanese government has undertaken extensive economic reforms, curbing fuel subsidies and unifying exchange rates. Donor funds have started to flow, as evidenced by the launch of the “Family Support Program”, a social safety net, in February. The Sudanese government hopes that its efforts will soon lead to debt relief under the IMF’s Heavily Indebted Poor Countries Initiative (HPIC).

The challenges for Sudan’s transition remain enormous. Inflation is running over 300% and has led to an explosion of the costs of living for ordinary Sudanese. Parts of Sudan face crisis levels of food insecurity. Besides addressing this deep economic crisis and its social impact, the authorities will also need to bring the country to a new constitutional order and free elections; to make peace with the two holdover armed groups which have refused to sign the Juba agreement; and to address flare-ups in intercommunal conflicts in Darfur and Eastern Sudan, which have already displaced over 100,000 people in 2021.

In this panel, we will discuss the place of UNITAMS in Sudan’s transition and the opportunities and challenges facing the mission in light of recent shifts in the Sudanese context. The mission’s role in peace-making and peace-building operations will offer an opportunity to discuss recent insecurity in Darfur, prospects for inclusion of holdover armed groups in the Juba process, and the implementation of the Juba agreement. Addressing UNITAMS’ role in coordinating international assistance to the transition will allow us to broach progress on debt relief, recent and expected commitments from donors, and their likely impact on Sudan’s economy and society. Finally, we will discuss how UNITAMS can assist Sudan’s transition given the institutional setup born out of the Juba agreement.

Presentation of the panel

Assistant Professor in Peace and Development Studies, University of Bahri

Here you will find the program for download: Program_UNITAMS in Sudan’s Shifting Transition.pdf 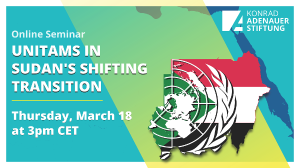