An event for judges, prosecutors and lawyers from the Republic of Moldova, Romania with guests from Armenia

The Rule of Law Programme South East Europe (RSPSOE) of the Konrad Adenauer Foundation, in cooperation with "The Aire Centre" and "Civil Right Defenders", organised an online event presenting the Romanian translation publication "Covid-19 and the Impact on Human Rights".
March 22, 2021 Ordering Information

First, the event was opened by the head of the RSPSOE, Hartmut Rank, and all experts and participants were welcomed. The event was moderated by Stanislav Splavnic, Research Associate at the RSPSOE. Introductory words were spoken by Biljana Braithwaite (Programme Director Western Balkans, The Aire Centre), Cristina Rotaru-Radu (Director of the National Institute of Magistracy, Romania), Diana Scobioala (Director of the National Institute of Justice, Republic of Moldova) and Sergey V. Arakelyan (Director of the Academy of Justice, Armenia).

Following the introductory remarks, Professor Ledi Bianku (former judge at the European Court of Human Rights and professor at the University of Strasbourg) began the presentation of the Guide. Prof. Ledi Bianku stated in advance that the European Court of Human Rights in Strasbourg also has major problems with judicial matters in the context of the Covid-19 pandemic, and that because of this there was already interest in producing the Guide. The former judge then addressed the duty of states to protect the health of every individual and to what extent the fulfilment of this duty conflicts with various human rights under the ECHR (European Convention on Human Rights). He said he saw last year's measures as justified because it was an exceptional situation for which all European states were not prepared. Nevertheless, Prof. Bianku clarified that the question of measures or restrictions was a question of proportionality. According to this principle, the state must reduce these restrictions to a minimum and lift them if they are no longer necessary. This tension between the urgency of the measures and conformity with the rights under the Human Rights Convention is presented very extensively in the Guide.

In a constructive dialogue between Prof. Bianku and Hannah Smith, the lawyer, who also works as an expert with the organisation "The AIRE Centre", described a similar view. She began by talking about how the pandemic is not only about balancing the right to life and freedom of movement, but also about many other aspects. As an example, she highlighted the problem of prioritising Covid-19 patients over others in hospitals, among other important cases. Hannah Smith said that the Convention on Human Rights is an important tool to discuss and evaluate the individual restrictions and that especially the case law of the European Court of Human Rights must also be used as a guide to analyse the measures. The individual measures, through which the human rights of almost all individuals were affected, must always make clear the aim of the measure, which in times of the pandemic is health protection. Hannah Smith, like Prof. Bianku, also addresses the principle of proportionality and shows that this principle should answer the question of whether the individual measures actually represent the best way to achieve the goal of health protection. In addition, Hannah Smith also addressed government transparency, saying that the government must ensure that correct information is published and disseminated and that the government must always provide transparent information about the pandemic and vaccination.

Following the presentation of the guide "Covid-19 and the impact on human rights", the moderator, Stanislav Splavnic, gave the floor to three experts from Romania, the Republic of Moldova and Armenia to present the current status within these countries.

At the beginning, Cristina Rotaru-Radu, Director of the Romanian National Institute for Magistracy, gave information on the situation in Romania. She spoke of the fact that new laws had been passed regulating the fight against the pandemic. In addition, a state of emergency was declared in Romania. This allowed the Romanian government to establish regulations to combat the pandemic within 30 days, which, as described above, interfered with various human rights. Specifically, freedom of movement, the right to family and private life, the right to education and many others were restricted. She clarified that many restrictions were a deviation from the requirements of the Convention on Human Rights and therefore needed to be discussed and analysed particularly critically.

Diana Scobioala, Director of the Moldovan National Institute of Justice, then spoke about the situation in the Republic of Moldova. She began by drawing parallels with neighbouring states, as the Republic of Moldova had almost the same restrictions as neighbouring Romania. Nevertheless, there were certain restrictions that did not result in the same restriction. A state of emergency was also declared, which is even limited to 60 days in the Republic of Moldova. Within this statue, restrictions were imposed by the government that affected fundamental rights and freedoms. The Director spoke of the need for guidance to the national courts to ensure a balance between the restrictions and the interests affected. She also outlined that the national transition to digital work had not progressed as quickly as the authorities would have liked. There were mainly problems in accessing the internet and technology to be able to work and learn digitally. They tried to make it as realistic as possible, especially in education, but this posed problems for Moldova.

Finally, Sergey V. Arakelyan, the Director of the Judicial Academy in Armenia, presented the situation in Armenia. First, he began his account with the first case of infection in Armenia, which was registered on 29 February 2020. Due to the subsequent dynamics of infections, a state of emergency was also declared in Armenia on 16 March 2020. In the course of the first half of 2020, the authorities registered 395 cases of domestic violence. In parallel, calls to the Centre for Support to Women increased by 50% compared to last year. Nevertheless, the government has not taken any targeted measures to protect victims of domestic violence and provide them with shelters for protection. Moreover, the Armenian expert describes that schools were switched to distance education in March 2020 and did not reopen until September 2020. As another aspect, Sergey V. Arakelyan mentions that websites had to delete information as strict rules were enacted prohibiting the publication of information around the pandemic that did not fully match the official government information.

After the presentation of the book, the participants had an extensive conversation about judicial cooperation in criminal matters in the light of Covid-19 inside and outside the EU. The Covid-19-related restrictions have clearly complicated criminal justice activity in most countries, from a human rights perspective as well as from a law enforcement perspective. This also affects the question of whether persons may be extradited to countries with a high risk of infection and whether the conditions of detention in such cases are objectionable from a human rights perspective. This question is exposed to further difficulties when considering the procedures of the European Arrest Warrant. Against this background, the measures adopted by the respective countries were also discussed.

In conclusion, the heads of all participating judicial academies thanked the participants for their cooperation in the project and looked forward to quickly distributing the guide among the judges and prosecutors of the participating countries. 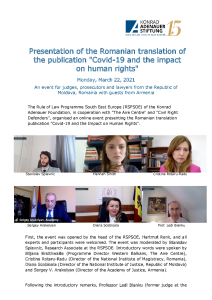 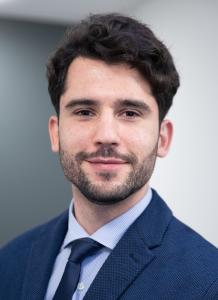