Recently, media attention focused on the increasingly precarious situation at the European Union’s external borders in the Mediterranean area. Yet, the dilemma of Europe’s migration policy is found at the Union’s Eastern borders as well. Once again, reception centres are overwhelmed. Once again, many migrants seek to avoid registration to be able to continue their journey to particular EU member states, such as France or Germany. Many seek shelter in abandoned houses and vacant buildings which lack access to clean water, electricity, and heating. And once again, migrants attempt to cross the frontier eluding border guards. This situation is indeed not new. It stood in the focus of attention in Bosnia and Herzegovina, especially in last year’s winter. But this time the "game", that is, the repeated attempt to cross the border unrecognised, is not only taking place at the notorious borders like the Bosnian one. The "game," as the migrants themselves call it when they repeatedly try to cross the border illegally until they succeed, has shifted. While the so-called Balkan route used to run mainly through Bosnia and Herzegovina, Serbia, Croatia and Hungary, now Romania has become part of the route. Why has Romania become another stop of the "Game" now?
May 27, 2021 Ordering Information

Like the other countries along the Balkan route, Romania borders EU states as well. The country itself is a member state of the Union. In addition to bordering the EU states of Hungary and Bulgaria, Romania shares borders with a number of non-EU states, namely Serbia, Ukraine and Moldova.

Despite it favourable geographic position, Romania has not been a central part of the Balkan route taken by migrants to travel via Eastern Europe to Central and Western Europe for a long time. One reason for this is Romania's unique situation: Romania is a member of the European Union's Dublin system and thus responsible for the asylum procedures of people first registered there. In this context, people entering the country are also registered in the EURODAC system. Romania is part of the EU and part of the Common European Asylum System but it is not a member country of the Schengen area. Although it was already announced in 2017 that Romania could become part of Schengen in the near future through appropriate reforms in the field of justice, rule of law and anti-corruption, Romania has to this date not achieved these benchmarks.

Legally, therefore, Romania is in a special situation. It is a EU member state, lying between the border of the Schengen area on the one hand and the external borders of the EU (with Serbia, Moldova and Ukraine) on the other. The country alone is responsible for the asylum procedures as well as for the protection of its borders – European external borders. Refugees and migrants arriving in Romania thereby reach "only" the EU, but not the Schengen area. Hence, onward travel to other EU states is not possible without further ado, even if the asylum procedure is successful.

Nevertheless, migrants have come to Romania in increasing numbers over the last months. According to reports, currently there are more than 1000 migrants arriving monthly in western Romania. The relevant facilities in this part of the country are overloaded and local authorities are increasingly overwhelmed despite their own efforts and civil society engagement, among others by distributing food.
The situation is especially precarious in Timişoara, Romania's third largest city. This is where most migrants seek to go, even those who were actually housed in equipped reception facilities in other parts of the country. The reason for that is the city's proximity to the country's borders. The border with Serbia, through which many migrants enter irregularly, is only 40 km away. The border with Hungary, through which migrants leave, is also less than 100 km from there.

In this Romanian border region, a lot seems to be the same as elsewhere along the earlier Balkan route. To begin with, the local population is very willing to help the new arrivals. Most migrants enter the country irregularly; many of them have no identification papers. Many of those who can be identified come from countries such as Afghanistan or Pakistan; most want to elude registration in Romania. And like the migrants who seek their fortune at playing "the game" in other Balkan states, these migrants do not want to stay in Romania, but wish to travel on to other EU states, such as France, Germany or Austria. Therefore, those responsible in Romania lack the political will to handle the situation. That is why in western Romania, as in other hotspot regions of the migration movement, local authorities increasingly feel left alone and overwhelmed.

Why is Romania becoming part of the Balkan route at this particular moment?

The fact that Romania is experiencing such an increase in the influx of migrants right now is primarily due to two developments. First, Romania's frontiers are still relatively permeable compared to the increasingly robust and sometimes forcibly protected external borders of the other EU states along the Balkan route. The fact that migrants are repelled elsewhere, in some cases even unlawfully, has led to the search for new routes into the Schengen area. One such new path has emerged at the Romanian-Hungarian border. The long lorry lines forming at the borders because of measures against the Corona pandemic have provided further incentives. Hidden in trucks, some migrants try to cross the border unseen.

Second, conditions in many countries of origin have worsened, pushing people to migrate or flee. For example, due to the withdrawal of forces from Afghanistan it is expected that the number of people leaving Afghanistan will increase along the Balkan route. The pandemic and the measures taken to contain it have also worsened the economic situation of entire populations worldwide and contributed to a further lack of prospects.
The desire for a good life and the presumed possibility of finding it in some of Europe's countries is driving more and more people to leave their homeland.

Romania's borders have turned into a focal point where migrants from different countries and driven by different motivations try their hand at the "game", i.e. crossing borders into the Schengen area unseen by border guards. They come to Romania hoping that the porous borders will provide them the opportunity to continue their journey, not because they want to stay here. They prefer the precarious conditions in the border region to the processing facilities in other parts of the country because they want to move on quickly. They are not seeking a better future in Romania, but in certain EU states. The subsequent concentration of migrants in particular border regions challenges the local authorities. The migrants’ concentration in border regions and their aim of moving elsewhere contribute to the authorities’ perception that the migrants' situation is the "somebody else’s problem". Therefore, there appears little political will to improve the situation in these regions.

Yet the situation in Romania, like that in Bosnia and Herzegovina and numerous other places, is symptomatic of a fundamental problem: the lack of an international solution for dealing with migration in a rule-based manner which meets the needs and interests of refugees and migrants as much as those of the local population. If the destination countries’ citizens oppose migration and refuse to take in migrants, pressure will mount on policymakers to regulate entry and transit more strictly. In situations of such contentious politics, a sustainable European migration policy cannot succeed.

An international approach balancing the diverse interests is required. Only if the different interests are taken into account, a common regulation will enable a sustainable solution to the growing problem at Europe's borders. 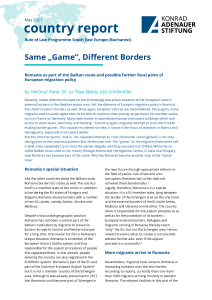 Head of the Rule of Law Programme Southeast Europe