“Good Governance is key to sustainable transformation in the MENA region” 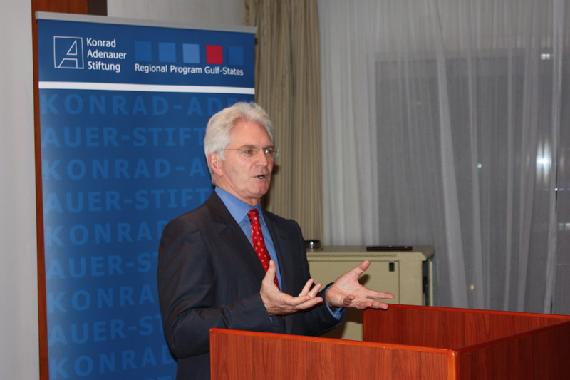 Dr. Nasser Al Saidi, Chief Economist of the Dubai International Financial Centre and Executive Director of the Hawkamah-Institute for Corporate Governance, identified good Corporate Governance as one of the key factors to sustainable change in the MENA region. 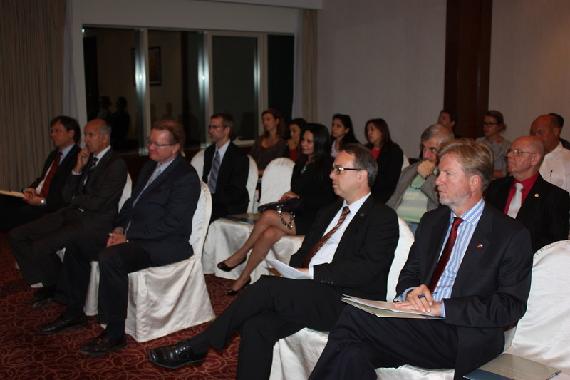 Representatives from businesses, government and academics were amongst the audience.

The event was part of a lecture series on Corporate Social Responsibility issues organized by the Regional-Program Gulf-States of the Konrad-Adenauer-Stiftung. Dr. Saidi, a former Minister for Economy and Trade and Minister of Industry of Lebanon (1998- 2000) identified mal-governance especially in the banking sector as the key reason for the ongoing global financial crisis. “The financial sector has become so complex by now, that the governing boards of the financial institutions have lost oversight and lack the understanding about what is going on in their organizations,” Dr. Saidi told the audience which included representatives from various Abu Dhabi based companies and financial institutions. “The more there is a need for strong Governance Guidelines to be established and enforced”, Dr. Saidi concluded.

While Corporate Governance Guidelines have long been in place in the industrialized countries, the concept is rather new to the MENA region. The absence of a stronger corporate governance culture can be attributed to the fact that the financial markets in the region have only developed over the last 10 years. There are no grown structures in place. “So far the markets have been dominated by banks. 70% of financing is done by banks, 25% by equity holders and only 5% through bonds and funds,” explained Dr. Saidi. “Furthermore, most companies are either state owned or family businesses and have been dominated by single individuals.” These are the two key business sectors that need to be targeted.

However, Dr. Saidi conceded positive developments to the region. First steps to introduce corporate governance and to bring about structural changes have recently been taken. “Today, all GCC countries have corporate governance guidelines for listed companies in place. Bank regulators have started to impose guidelines for banks and the telecom sector has also been put under stricter regulations.” Nevertheless, the establishment alone of such guidelines is not sufficient. “They now need to be implemented and enforced.” The latter of which poses a real challenge.

One problem to overcome, for instance, is the fact that business procedures in the financial sector are often carried out so quickly that the regulatory bodies don’t learn about them until after their implementation. Dr. Saidi therefore strongly advocates the incorporation of good corporate governance standards into banks and businesses. The two major challenges good governance faces are the lack of transparency and disclosure of companies’ financial statements and the absence of accountability, which in Dr. Saidi’s opinion “looms large over the Arab world in general.” He stated further: “Throughout the GCC there is currently no reporting systems for companies in place. Due to this lack of transparency only 20% of Small and Medium Enterprises (SME) have access to credit systems, which in turn keeps them from being able to expend and prosper.”

In the current volatile climate of transformation throughout the MENA region, Dr. Saidi strongly recommends that all the shortcomings and gaps he alluded to need to be addressed urgently and comprehensively by the new leaderships in the affected countries to ensure a sustainable and peaceful success of the recent revolutions. “The leaderships will have to show the path and ensure that these violent transformations do not end in further years of yet another tyranny.”

The principles of Good Governance are not merely applicable to the governance of companies alone but governments per se, including political government of nations, stated Dr. Saidi and referring to the ongoing transformation process in the Arab world he continued: “I do not agree with the term “Arab Spring” to describe the development in the MENA region. Spring is associated with new life and a new beginning that leads to permanent change. It is too early to know if the transformation the region is undergoing will be a sustainable development. For that we need a leadership that addresses the region’s vulnerabilities that led to the popular uprisings comprehensively.”

Dr. Saidi identified Demographics, a high dependency rate, political vulnerability and economic vulnerability as the decisive vulnerabilities in the MENA region that let to the popular uprisings in various Arab nations. More than 80% of the population is under the age of 28 and 15-20% of them are without jobs (in Saudi Arabia this number is as high as 40%). Growing anger and discontent about their situation posed an explosive mix that was only waiting to erupt. The sheer size of the families that are depending on one bread-winner only, coupled with an absence of social safety nets leads to an increased poverty rate in case the income-earner looses his job or dies. The lack of voice and participation from the people, as well as a complete lack of accountability from the government dominates the political climate. On top of that the general public slipped further into poverty despite periods of economic growth, while the ruling elites accumulated more and more wealth. High inflation, rising unemployment and falling real wages created an economic frustration amongst the many unemployed youth that was bound to find its way onto the streets.

“As you can see, the Arab firestorm could have happened anywhere in the region,” concluded Dr. Saidi. “That it started in Tunisia was mere coincidence” He stated that the MENA region was predisposed to paramount transformation and in order to counter these dangerous developments the governments need to deal with all these vulnerabilities comprehensively. “Only if all these factors get addressed simultaneously does the region have a chance to bring about sustainable growth that includes all parts of society!”

Dr. Nasser Al Saidi has been the Chief Economist of Dubai International Financial Centre (DIFC) since 2006. He leads the links with governments, central banks, and international organizations. Dr. Saidi is also the Executive Director of the Hawkamah-Institute for Corporate Governance and The Mudara Institute for Directors a the DIFC.

CHANGE OF DATE: Corporate Governance in the MENA Region