The EU funded Sharaka project held its second series of lectures in Kuwait, the UAE and Bahrain from 15 to 17 April 2013. This time, the lecture aimed at providing information about the EU, its institutions and policies in the Mediterranean. Dr Nathalie Tocci, deputy director of the Italian research centre Istituto Affairi Internazionali (IAI), dealt with EU foreign policies in the Middle East and North Africa (MENA) region in the aftermath of the transformations. At each stop, her lecture was followed by remarks of a local counterpart before the discussion was opened for the audience.
April 25, 2013 Ordering Information 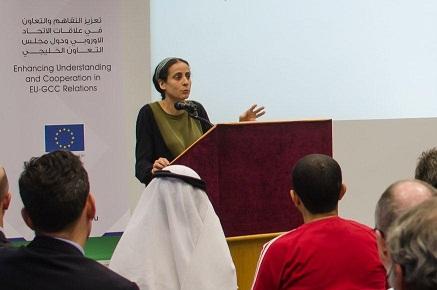 After a brief overview of the political situation in North African countries, Dr Tocci underlined the lack of a long-term strategy to face the changing political landscape. Immediately after the transitional processes in the MENA region had broken out in spring 2011, the EU implemented a rethink of its bilateral European Neighbourhood Policy (ENP). A particular challenge was the growing political heterogeneity of the transitioning countries. In conclusion, the EU adopted the ‘more for more’ principle to encourage political reforms in the MENA countries and deepen economic relations. After outlining the improvements associated with the ENP revision, Dr Tocci focused on its shortcomings: The renewed European commitment towards the region needed to move beyond rhetoric and focus on tangible projects like small and medium enterprises, microcredit projects, rural development and the empowerment of civil society.

Dr Tocci argued that Southern Europe has been provided with a great opportunity to overcome the EU foreign policy impasse by “jumping into the driver’s seat” of European Mediterranean policy. A number of present and historical similarities give the Southern Mediterranean and Southern Europe the chance to share experiences on institution-building and constitution drafting. Countries like Greece, Italy, Portugal and Spain, which have gone through painful transitions from authoritarian rule in the past, are now called to provide assistance in smoothing the transitions using the lessons they have learnt. According to Dr Tocci, they should take the lead by tracing clearer political and economic guidelines that are able to meet the new challenges emerging on both shores of the Mediterranean. Southern European countries should promote trilateral partnerships with actors enjoying better economic fortunes, notably Turkey and the GCC states, to complement for the EU's limited resources and mounting fiscal constraints.

Every lecture was followed by remarks of a discussant from the respective host organisation in the Gulf: the American University of Kuwait, the Zayed University in Dubai and the Bahrain Center for Strategic, International and Energy Studies (Derasat). The lively participation of the high-ranking audience proved both the region's interest in EU foreign policy and the topic's relevancy for the GCC.