The Rule of Law Programme Asia organized a conference in Siam Reap to discuss the regional implications of Expropriation. Its objective was to highlight the legal remedies and mechanisms to secure land and property rights in South-east Asia.
April 29 - May 01, 2014

‘Expropriation’ as a term has developed in international jurisprudence to be understood in the context of ‘eminent domain’ where a government or public authority takes possession of land towards ‘public use’ thus divesting the title of the private owner. However, the media today often associates ‘expropriation’ with ‘land-grabbing’ and the debate has generated much controversy in the Southeast- as well as East-Asian context.

In this regard, the Rule of Law Programme organized an international seminar in Siam Reap to specifically address the following the questions:

–What are the legal, socio-economic, cultural and environmental implications of ‘Expropriation’ of land as it is understood today in this region?

–And thereafter, what possible legal solutions are available to address the various facets of ‘land-grabbing’ (generally, but not exclusively, used to describe the taking of arable or agricultural land) in South-east Asia?

The target audience for the workshop included representatives from Government authorities, legal experts on national and international law and especially, experts from Civil-society who have ‘on-ground experiences’ from the respective countries. 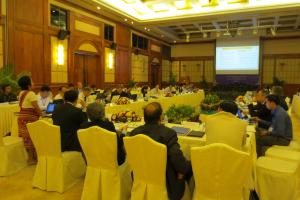 Participants in session during the workshop on 'Appropriate Expropriation' - Securing Land and Property Rights in South-east Asia held in Siem Reap, Cambodia from April 29- May 1, 2014.