by Hendrik Sittig, Darija Fabijanić
In Serbia there is currently an economic crime thriller happening on the television market and this before the parliament elections on the 26th April. The story is about several cable providers and the media group „United Media“ (parent enterprise: „United Group“) with its TV channel N1 that belongs to the media companies in Serbia which report critically about the government. The state-owned cable provider “Pošta Net“ has already removed the channels of United Media from its programme last December because they couldn’t agree on a contract renewal. As a result, many households couldn’t receive N1 anymore. Since Mid-January more viewers are affected, as the cable provider under the state „Telekom Serbia“ hasn’t prolonged their contracts either. A public exchange with accusations of political and economic interference between the players followed. Similar situations in the neighbouring countries can be observed. But let’s be clear from the get-go: The situation is more complicated than that and political reasons are not the only explanation for it.
February 10, 2020 Ordering Information

Commercial conflict or political influence before the elections?

The public dispute between the two telecommunication companies Telekom Serbia and United Group which has its own cable providers and the media company “United Media”, has been dominating the headlines in Serbia for several days now. The cable providers of the brand “Supernova” which belong to Telekom didn’t prolong the contract for transmitting the “United Media” channels. Therefore, since January about 200 000 households can’t watch 17 channels. Since the independent TV channel N1 is also affected, this is being criticized as an attack on media freedom. The parent holding of N1, the United Group, commented: “The failed negotiations with Telekom bring more darkness to the media.” Telekom Serbia defended itself and justified the failure with economic arguments. The financial demands of United Group to allow Telekom to transmit their channels through their platforms are considerably above market price. The result has been a public back and forth without any solution of the dispute – inclusively statements from politics. Prime Minister Ana Brnabić sees in these actions a political campaign from N1. The opposition criticizes the situation as state interference to reduce critical voices before the parliamentary elections.

Who are the players?

From an outside perspective it is in fact very difficult to understand who are the players in the conflict and how they are interconnected: Telekom, United Group, United Media, Supernova, SBB, N1. Ultimately, all players are divided into two groups: United Group and Telekom Serbia.

United Group is a media and telecommunication company registered in the Netherlands with the biggest investments coming from Great Britain. Its founder is Dragan Šolak. He started the company with the cable provider Serbian Broadband (SBB) and the purchase of other providers in Serbia and the region. SBB became quickly the market leader. 2007 an investment fund from London “Mid Europa-Partners” bought SBB together with other providers (EBWE, Telemach Slowenien und Telemach BiH). Shortly after, they all were united under the brand “United Group”.[1] The company is not only in Serbia an important player on the telecommunication market, but in the whole region. Currently, they have expanded their network as the acquisitions of Vivacom in Bulgaria and Tele2 in Croatia. However, United Group is not only a telecommunication company, but also owns several media outlets in the region. Thus, the media holding “United Media” is also part of the group. These include some popular sport channels and the above mentioned news channel N1.

The second player is Telekom Serbia whose majority shareholder is the Serbian state. Telekom Serbia received a lot of criticism last year because the company expanded its market presence massively by purchasing several cable providers in Serbia. Thus, the two big cable provider Kopernikus Technology and Radijus Vektor were purchased last year. Some smaller providers like Avkom and Telemark were added later. Telekom put all these cable providers under the brand “Supernova”. This broad acquisition was heavily criticized as it was seen as an attempt to concentrate the telecommunications market further and thus to control and influence it better. Telekom denied these accusations with the argument that despite these acquisitions it is still not market leader in Serbia.

What are the players fighting about?

The dispute can be divided into two aspects – on the one hand the economic interests, on the other hand the political ones. But to understand both sides completely, let’s have a closer look at the television market.

Free of charge transmitted via terrestrial (DVB-T2) and satellite transmission are the public broadcaster RTS and the private channels Pink, Happy TV, O2 and Prva. All these channels are being considered pro-government. If households want to watch more channels, thus they have to find other ways for transmission. 1,92 million households are using other transmission channels and pay for them. Most people use cable TV (more than 60 percent), followed by internet television (IPTV) with 25 percent and 12 percent paid satellite reception.[2] These numbers show clearly the importance of the cable TV market as 1,15 million households have cable TV. The most popular cable provider is Serbian Broadband (SBB) of United Group. They dominate almost half of the market (49 percent). Telekom follows with 26 percent with its own cable network. But the number of the small cable providers of Supernova which are controlled by Telekom are not yet included in this number.

The economic aspect of the conflict: Telekom (or its Supernova) has an economic interest in the United channels, as their sports channels (Sport Klub) have lucrative football broadcasting rights like the English Premier League or the European and World Championships. After the contract expired, customers of Supernova couldn’t watch the games anymore. Thus, Telekom must worry to lose clients. However, so far the price for transmitting the United Channels is too high – according to Telekom Serbia.

The political aspect is – as explained above – the news channel N1 in the package of “United Media” which is currently not included in the cable network of Telekom. And the government – before the upcoming parliament elections – doesn’t have a huge interest in extending the contract despite economic losses for Telekom.

It is a public dispute among all players and it is at the expense of the viewer, the plurality of opinions and in the end of democracy. The series of accusations, offers and rejections which are thrown at each other by Telekom and United Group is long and almost daily in the headlines. A few days ago there were even cyberattacks against N1 and its website was down for hours. On 1st February representatives from media, academia, civil society and citizens protested in Belgrade and demanded that the conflict should be ended and N1 must be available again through the state-owned cable providers.

Montenegro / Bosnia and Herzegovina: Similar game as in Serbia

The citizens in Bosnia-Herzegovina and Montenegro face a similar situation. Since January several Bosnian households are not able to receive the TV channel Nova BH anymore. About the background: In 2018 United Media bought the channels Pink BH (in Bosnia) and Pink M (in Montenegro) which belonged to the Serbian media group Pink. After the acquisition the channels were renamed Nova BH and Nova M. Ratings rose fast, due to the popular entertainment programmes and sport events. In January 2020 however many cable providers which are partly owned by Telekom Serbia took them out of their offer with the explanation that the price for transmission is too high. This shows that Telekom Serbia and United Group are also fighting in the neighbouring Bosnia. However, it must be added: Nova BH is not only dependent on cable providers, it is also transmitted free through terrestrial distribution.

We have a similar picture in Montenegro where the conflict between the same companies Telekom Serbia and United Media has already started last March – namely between their subsidiary companies: the cable provider Mtel Montenegro (owned by Telekom Serbia 51 percent and Telekom Srpska in Bosnia 49 percent) and TV channel Nova M. Both couldn’t agree on a price for transmission and the contract wasn’t renewed. Nova M said that they have offered all cable providers the same price, but Mtel declined. Interestingly, Mtel is distributing for the same price the Serbian pro- government public broadcaster RTS.

In all three countries the national regulatory agencies were asked to settle the conflict. They didn’t act because they don’t have the authority to intervene in price negotiations. Every media group can demand a price for the transmission of its programme in the cable networks. The cable providers are not forced to accept this price and to transmit the channel.

In Germany, for example, cable providers have more obligations. Several channels like public service media and important private channels have to be transmitted. These channels are part of the Must-Carry-Programme and are a measure to secure a variety of programmes. Furthermore, the state media authorities (“Landesmedienanstalten”) make sure that all television channels have the same economic conditions to access the cable providers. Furthermore, in Germany TV channels pay the cable providers – different than in South East Europe, to distribute their programme.

Especially in countries where media freedom is threatened, these kinds of conflicts between media and cable providers are dangerous. In these cases, some legal regulations are necessary to protect the plurality of programme similar to the case in Germany. Concerning the conflict between United Group and Telekom Serbia, it is important that both players are willing to find a solution in terms of media plurality. Citizens in a democracy must be able to independently form their opinion. The KAS Media Programme South East Europe thus supports in the whole region a pluralistic media system and the availability of independent TV channels. Independent journalism is important for democracy; politics and economy shouldn’t obstruct this. An der roten Absatzmarke bei Bedarf einen Seitenumbruch einfügen

[1] Since March 2019 BC Partner from Great Britain is the biggest investor. 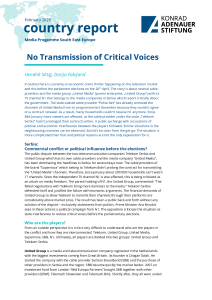 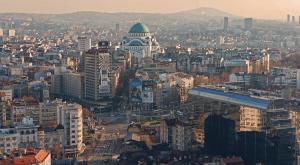 Zlatan Jovanovic / Wikimedia / CC BY 3.0
More about this topic
Comments