South Africa is fossil fuel dependent, with approximately 90 per cent of its energy derived from coal. Per capita, it is in the top 15 carbon emitters in the world. South Africa’s climate change response policy frameworks include a commitment to reduce its GHG emissions to below business-as-usual by 34 per cent by 2020, and 42 per cent by 2025. In order to achieve these commitments, additional financial investments – from both public and private sources – are required.
July 14, 2017 Ordering Information

Within its Nationally Determined Contribution (NDC), South Africa states that the implementation of its commitments is subject to, and conditional on, finance, the transfer of technology, and capacity building from domestic, private, and international sources; particularly for its national Green Fund, with an allocated USD 110 million in the period 2011 to 2013. The NDC furthermore enumerates its climate-related expenditure to date, and lays out a roadmap of proposed activities, with the indicative scales of finance required to achieve these activities. The programmes identified for investment include the expansion of existing public works programmes (Working for Water, Fire, Wetlands); Water Conservation and Demand Management; the expansion of its Renewable Energy Independent Power Producer Procurement Programme (REI4P); and the roll-out of electric vehicles.

South Africa’s NDC clearly emphasises the need for climate finance to support adaptation over mitigation measures, and it strongly endorses the narrative that investing in climate adaptation represents opportunities to reduce poverty and inequality, while simultaneously addressing other socio-economic development challenges such as job creation.

South Africa possesses a developed and well-regulated financial sector. Its financial community, including banks, insurers, asset managers, venture capital, private equity and hedge funds, has actively participated in low-carbon project development. The expansion of new climate-related technologies, associated with positive risk/return profiles, coupled with the introduction of incentives and governmental support schemes, has paved the way for commercial investment opportunities. Private banks, including Standard Bank, ABSA and Nedbank, have all provided debt financing on a project basis to companies awarded Preferred Bidder status under the REI4P. Financial backing from these renowned banks signalled trustworthiness to installers and commercial investors, giving companies and their partners financial security.

The finance community has mobilised both well-established and new primary capital market products to target low-carbon, climate-resilient investments. This includes project finance, corporate and project bonds, commercial lending, equity finance, and consumer finance. These have further been supplemented by new products, including the use of ‘green bonds’, carbon foot-printing and internal carbon pricing. Outside of the banking sector, public–private partnerships provide a route for institutional investment in RE.

In addition, a growing number of banks and investors are increasingly concerned about the climate responsibilities associated with company activities and investments. The most well-known initiative in this connection is the investor-led Carbon Disclosure Project (CDP). The South African-CDP, led by the National Business Initiative (NBI), promotes responsible investments in mitigation and adaption. In 2014, over 80 per cent of the 100 largest South African companies reported on their GHG emissions.

The public sector currently supports the development of sustainable projects through public procurement and catalyst projects, in which government and international financial institutions act as public finance sponsors, providing start-up equity to mobilise larger amounts of private capital. South African Development Finance Institutions (DFIs), such as the Industrial Development Corporation (IDC) and the Development Bank of Southern Africa (DBSA), currently play an active role as development partners and financiers (granting loan facilities) in the REI4P. South Africa uses public funds to mobilise private sector investment and to protect private-capital investors against risks of default. A number of financial tools are used in this context, leveraging either debt or equity via direct public financing or by providing public guarantees. Loan guarantees and policy risk insurance policies are the most prominent tools. Finally, international and corporate grant-providers are critical in consolidating financing packages for climate projects in South Africa.

Private investment for mitigation and adaptation

The private sector’s participation in the energy sector, and particularly in power generation, has been historically limited due to the dominance of the state-owned utility, Eskom. As part of the efforts to address energy supply and reduce emissions, the government introduced a National Energy Regulator of South Africa (NERSA); approved the Renewable Energy-Feed-in Tariff (REFIT) - in which a single buyer can purchase capped capacity amounts of RE at set prices from independent power producers; and launched the REI4P in August 2011. This is in line with South Africa’s Integrated Resource Plan 2010-2030 and highlights the need for an increase in RE generation capacity in South Africa’s energy mix. South Africa’s utility scale RE sector is the most mature in the region, and therefore offers a useful platform for investors seeking to venture into the rapidly growing regional market.

Since its establishment, the REI4P has procured over 6 300 MW in five bidding rounds and attracted high levels of private equity and debt investment. Some R192 billion Rand (US$ 14.4 billion) has been invested into the Programme’s 92 projects. The lion’s share of debt funding has come from commercial banks, and pension and insurance funds, with the remainder coming from DFIs. For the first three bids, 86 per cent of debt was raised internally, with South African pension fund Old Mutual committing to finance 16 projects. The most common financing structure has been project finance, although about a third of the projects used corporate financing arrangements.

Prices have fallen as the bidding mechanism has enabled REI4P to adjust to rapidly changing technology and development costs. The scheme has also delivered substantial socio-economic benefits, including the reduction of the national electricity supply constraint. The climate change benefit of the operational RE generation capacity, since 2012, amounts to 4.4 million tons of CO2-equivalent reduction. Increasing requirements have also created more opportunity for investments in local manufacturing and assembly facilities. In terms of commercial viability, the REIP4 offers valuable lessons in the design of the rolling competitive bid window procurement programme structure, which established market confidence early on and attracted vibrant investor interest locally and from abroad. The programme also maintained a supportive investment environment with a clear pipeline in the roll-out of the procurement programme.

However, the continuity of the flagship RE programme is not without challenges, especially with the need for better alignment between generation and transmission planning and implementation, and inadequate funding available for investment in transmission and distribution infrastructure.

While a number of G20 countries, including India and Indonesia, have begun energy subsidy reform processes, South Africa’s national commitments include a carbon tax, desired emissions reduction outcomes for sectors, company-level carbon budgets, and regulatory standards for specifically identified GHG. Initially due to come into effect on 1 January 2017, South Africa’s carbon tax will be pegged at a marginal rate of R120 (approximately US$ 9) per ton CO2-e. This tax will be implemented with complementary measures, including reduction of the electricity levy. The emissions reporting will be in line with mandatory reporting requirements for GHG emissions.

Besides the proposed carbon tax, South Africa’s green economy framework includes additional tax and fiscal stimuli, rebates, and standards in a variety of sectors. According to the KPMG Green Tax Index, South Africa ranks 13th out of 21 countries in its use of tax as an incentive to drive its green growth agenda (ahead of Australia, Singapore and Finland).

Despite significant advances, South Africa is still at the beginning of the anticipated transition, and much greater levels of adaptation and mitigation finance are needed if it is to meet its national commitments. Slowly but surely, at least in leading financial institutions, climate change is becoming a mainstream driver of investment strategy. In any case, although South Africa is a nascent market, sophisticated tools for understanding risk and vulnerability exist (including South African weather services), and products such as sovereign risk pooling, micro-insurance, catastrophe bonds and index-based insurance are being developed.

Besides RE’s, investment in other low-carbon technologies has been slow and there is a recognised need for increased investment in energy efficiency, renewable heat, smart grids, transport, and forestry.

At the policy level, an enabling investment environment requires governments to design and implement policies to encourage price competitiveness. Removing pricing distortions will contribute to a more level playing field and attract further private investment. Policy support measures can contribute to market transformation only if the regulatory framework is strict. These requirements are essential in emerging financial markets where risk is still high. In terms of South Africa’s REI4P, more certainty is needed from the highest political level to instil confidence amongst investors. Good governance and transparency is a prerequisite, as well as political and economic stability. In this light it is laudable that the South African Cabinet recently approved the International Arbitration Bill. The Bill is expected to contribute to investors’ confidence where disputes will be settled according to international best practice.

The South African finance community needs to expand its experience in adaptation finance and project implementation. This will include increasing knowledge of new services and technologies, and better understanding correlations between the risks and returns of associated assets. Those seeking capital and risk protection need to correctly gauge the market opportunities and efficiently structure their financing and investment strategies.

Romy Chevallier is Senior Researcher at the South African Institute of International Affairs in Johannesburg.

Tilmann Feltes is Trainee at the Konrad-Adenauer-Stiftung South Africa in Johannesburg. 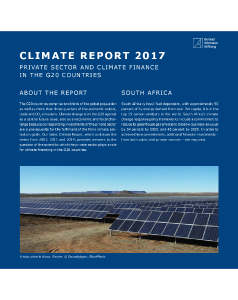 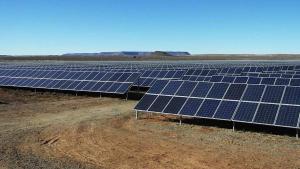