A Roadmap for Sustainable Biofuels and Bioenergy in Sub-Saharan Africa

The expert workshop organized by the University of Stellenbosch Development and Rule of Law Programme (DROP) and supported by KAS focused on the scientific, political and legal aspects of sustainable biofuels and bioenergy for Sub-Saharan Africa.
December 9, 2015 Ordering Information 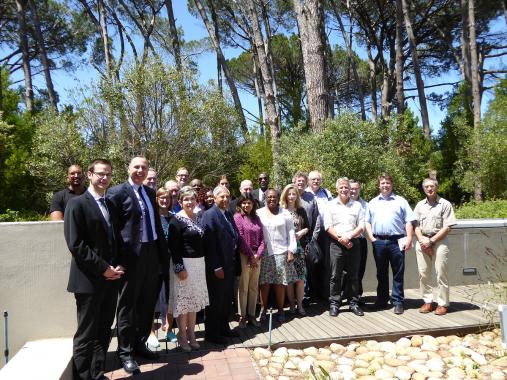 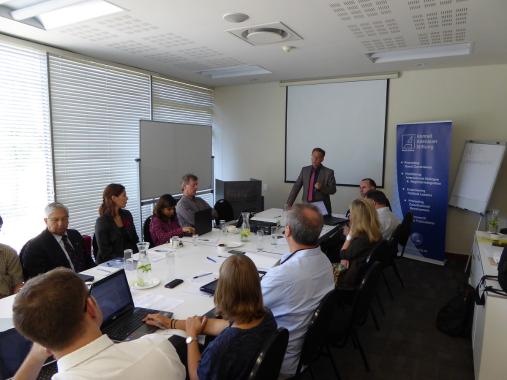 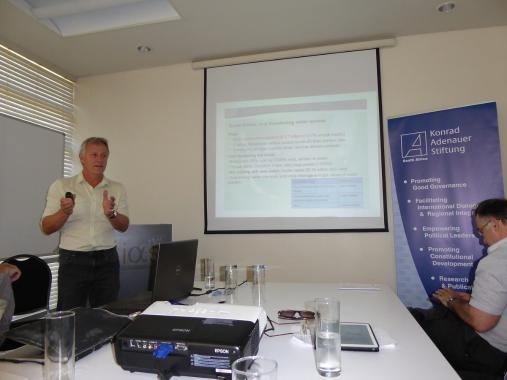 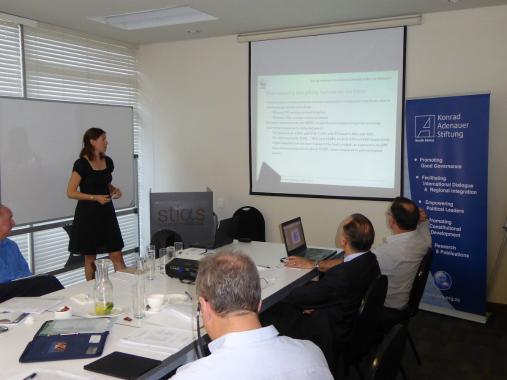 Ms Tjasa Bole-Rentel, Researcher at WWF South Africa and consultant for the national biofuels policy in Zimbabwe presents the developments of the draft National Biofuels Policy in Zimbabwe 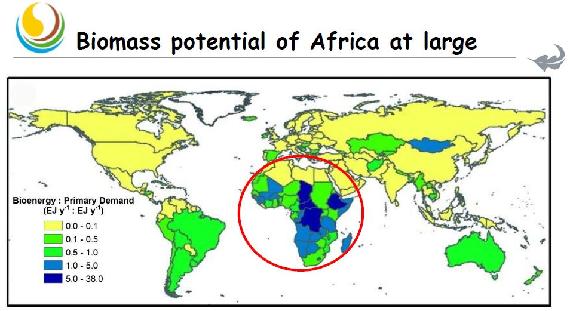 Energy independence is playing a growing role in politics regarding se-curity, peace and stability worldwide - and eyes are turning to Africa as the continent with the most “under-utilized” agricultural lands on the earth. Keeping in mind the high pace of urbanization and population growth in Africa, development in this field has to take place. Many studies have revealed the growing need to produce cleaner energy and to stop climate change. Agenda 21, the Kyoto Protocol and other international agreements and determining national policy documents, all over the world, indicate the need to replace fossil fuels with renewable energy sources in a sustainable way. Biofuels in this regard could increasingly become part of a solution to a wide range of challenges, from environmental sustainability in the face of climate change, to energy security rising geopolitical instability, to economic growth. Furthermore, biofuels can contribute to global climate mitigation and the urgency of the need to reduce global greenhouse gas (GHG) emissions.

This timely expert workshop before COP 21 facilitated by KAS together with the Development and Rule of Law Programme (DROP) and the Biofuels Research Chair at the Stellenbosch University focused on the above mentioned conflict by pointing out practical opportunities and regional challenges regarding the potential of biofuels as one solution for climate change mitigation. The workshop focused on policies, regulation, production, impact, and sustainability of biofuels in Sub-Saharan-Africa and especially considered comparative aspects from a Brazilian, Zimbabwean and South African perspective which brought in innovative ideas for the South African case.

On behalf of Stellenbosch University, Professor Dr. Eugen Cloete, Vice Rector Research and Innovation, opened the event with his welcoming remarks highlighting the urgent need for a new developmental paradigm by looking at the water, energy, agriculture, land, technology and health nexus as one holistic system. New developed technology will help to find new solutions to upcoming problems but, according to Prof. Cloete, there is also an urgent need to change the current juridical system to support change. After these welcoming remarks, Professor Dr. Oliver Ruppel welcomed the participants on behalf of DROP and gave a brief introduction on the topic, closing with the fact that this expert workshop should also take a closer look at the interaction between science, technology, policy, and law as a means of promoting development.

In an attempt to find solutions to these rising issues, the dialogue looked at the scientific background of biofuel production and how to amalgamate science and policy for the development of societal goals. The participants agreed that Southern Africa has large portions of underutilized land available that could be used for the production of biofuels. However, producing biofuels is seen as an extremely complex process with a multitude of factors to take into consid-eration. Despite technological advancement, major concerns are plaguing the implementation of biofuels policies in the region. These concerns often included the impact on food and water security in Southern Africa.

Professor Dr. Emile van Zyl who holds the Biofuels Research Chair at Stellenbosch University referred in his presentation to the possible posi-tive aspects of biofuels regarding economic growth and poverty reduction for Sub-Saharan-Africa. At the moment the greatest need for bioenergy would lie in private household use. The sugar cane industry could also be of great potential to Southern Africa, especially Mozambique. Professor Marcheti from São Paolo University in Brazil added that the production of ethanol could be very productive for South Africa as well and recommended that South Africa should use its potential to produce more ethanol. At the moment Brazil is still the largest bioethanol producer worldwide whilst the EU is the largest biodiesel producer. As the system is changing at the moment as concerns were raised in the last few years regarding the massive land use of bioethanol. According to Professor Marcheti research is ongoing to find more suitable crops for future use and to improve the oil yields of these crops. Current research is already focusing more on the usage of garbage or straw to produce biofuels as this doesn't affect the food industry. According to research done by Professor Dr. Alan Brent from the Centre for Renewable and Sustainable Energy Studies (CRSES), the production of bioethanol could indeed be a possible industry for South Africa whereas the production of biodiesel is too expensive for South Africa and should rather be imported. In general, Prof. Brent recommends that the fuel supply mix should be diversified to adapt better to possible agricultural crisis in the future. Regarding the legal framework in South Africa (2011 National Climate Change Response White Paper) there are severe legal restrictions and huge uncertainties regarding licensing for possible producers of bioenergy at the moment. In 2015 there are only four producers with valid licenses from the government in the market.

As with limited resources, ethics and inequalities becoming more important, the participants engaged intensively in the “food vs. fuel debate” as research shows that bioenergy also can have negative effects on food security, water supply and land use which in turn could trigger local conflicts in some cases. According to the IPCC there are three main threats which will govern Africa in the future: food insecurity, water insecurity and drought. It was highlighted that at the moment South Africa is stuck in-between these new developments. The participants agreed to the proposal of the representatives of the WWF, saying that only abandoned and degraded land must be used to grapple the benefits of sustainable bioenergy in Sub-Sahara Africa.

In general, the workshop fulfilled its role as a starting platform which brought together international experts to share their knowledge and to discuss further steps regarding a sustainable biofuels and bioenergy policy for Sub-Saharan-Africa. The workshop was very interdisciplinary by bringing in legal, political, environmental and sociological perspectives as well as the regional and the international perspective. It was agreed as one outcome of the workshop, that a publication should be put together to inform stakeholders and politicians better about the current developments in the sector. Furthermore, the participants are willing to meet up again in 2016 to discuss the implementation and ongoing developments in this fast changing field. 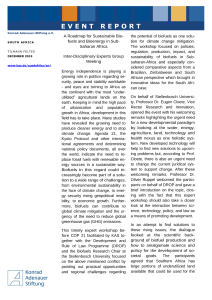 A Roadmap for Sustainable Biofuels and Bioenergy in Sub-Saharan Africa