Deadly Practices: Esidimeni and Beyond

“Deadly Practices: Esidimeni and beyond” was the title of the first event of the seminar series “Taking stock: Disability & Human Rights in contemporary South Africa” on 16th April 2018, jointly organized by the South African Holocaust and Genocide Foundation in collaboration with the University of Stellenbosch and the Konrad-Adenauer-Stiftung (KAS). The well attended event at the University of Stellenbosch provided the audience with a platform for an informed debate about the recent Life Esidimeni tragedy.
May 3, 2018 Ordering Information 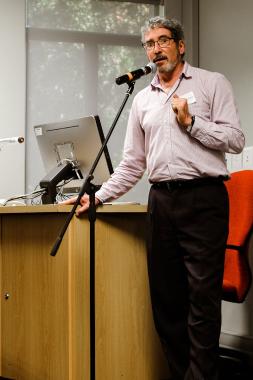 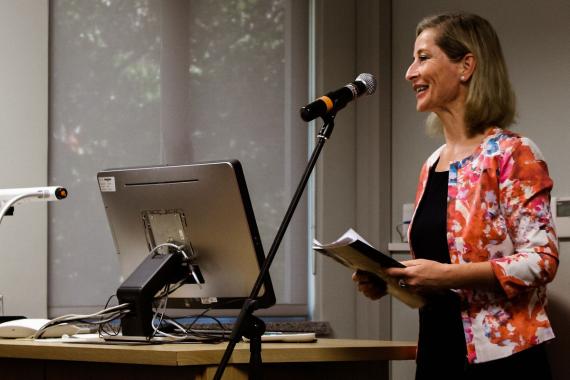 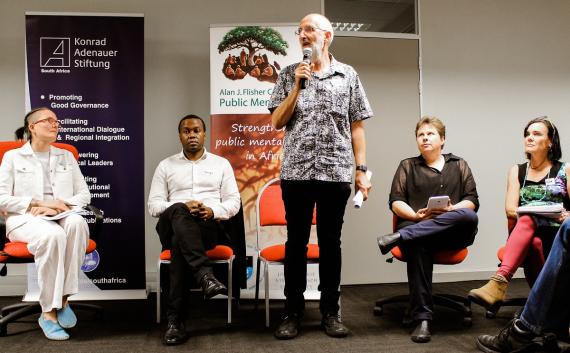 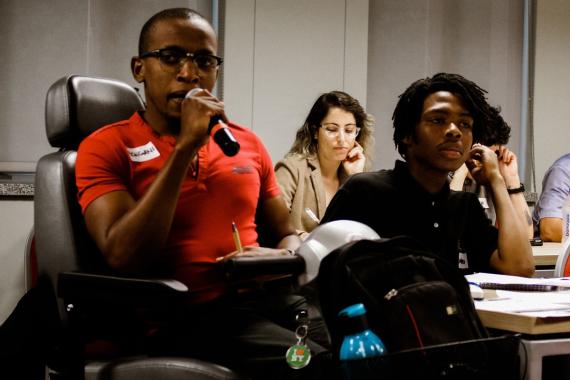 After the welcoming remarks by Richard Freedman, Director of the South African Holocaust & Genocide Foundation and Christina Teichmann, KAS Program Manager, Prof. Leslie Swartz from the University of Stellenbosch introduced the guest speakers.

The first guest speaker Annie Robb from the Ubuntu Centre South, a disabled people's organization, provided some background information about the Life Esidimeni tragedy. In October 2015 the Minister for Health in Gauteng, Qedani Mahlangu announced that around 2.000 mentally and intellectually disabled patients were to be moved from Life Esidimeni (a private healthcare provider) to other ill-equipped facilities. The decision by the Minister was taken based on financial considerations only and aimed to save costs by moving the patients to cheaper facilities. The transfer of the patients to other institutions resulted in the death of around 140 patients, 28 missing patients and 7 unidentified bodies. Moreover 532 patients were moved without them having any identification documents. Ms. Robb claimed further that the way of the discharge of the mental healthcare patients from Life Esidimeni was in breach of their rights under the Mental Health Care Act, legislated by the government in 2002 and violated several other rights, such as protection from “Exploitation and abuse” stated in Article 11 or Article 17 “Knowledge of rights”.

Charlene Sunkel, Program Manager for Advocacy & Development at the South African Federation for Mental Health, gave the audience an overview of the global context of mental healthcare. In 2015 there was less than one health care worker for 10.000 people and only one percent of these health care workers worked in the field of mental health care. Furthermore three out of four people with mental disability live in low and middle income countries and less than one percent of the healthcare budget in these countries is allocated to mental health care. However, Ms. Sunkel also pointed out that there are three global strategies in place to improve mental healthcare. Firstly, the Mental Health Action Plan 2013-2020 from the World Health Organization (WHO), which aims inter alia to protect people with mental disability from discrimination. Secondly, the WHO Mental Health Gap Action Program and thirdly, the UN Sustainable Development Goals (SDG), which include mental health.

The third speech held by Dr. Charlotte Capri, Clinical Psychologist at the Alexandra Hospital, focused on people with intellectual disability (ID). People with intellectual disability have problems with learning, understanding and processing information. In contrast people with mental disability struggle with distorted emotions, perceptions and behavior. Dr. Capri stressed that people of all levels of intellectual ability can suffer from mental illness. The Life Esidimeni Scandal also affected many patients with ID. Dr. Capri therefore lobbies for an intensified cooperation between people with ID, care takers and policy makers. There are two million people with ID living in South Africa, which means 1 in every 25 South African. One of the main problems for adults with ID in South Africa is that they are legally classified as children but that they do not enjoy the same protection as children. Article 17 of the Mental Health Care Act of 2002 lacks adequate governance for adults living with ID. Dr. Capri therefore considers it necessary to draft a “Vulnerable Adults Act” in order to improve the rights of adults with ID.

The last speaker Prof. Bonginkosi Chiliza, Nelson R Mandela School of Medicine out-lined the role of the South African Society of Psychiatrists (SASOP) in the Life Esidimeni Scandal. The SASOP supported an approach by the South African Depression and Anxiety Group (SADAG), Section 27 (public interest law center) and representatives of the families of the patients to stop the chaotic discharge of patients; however this claim was dismissed in March 2016 by the responsible court. Furthermore the president of SASOP at the time, Dr. Mvuyiso Talatala appeared before court to give his testimony about the case during the arbitration hearings, which started at the beginning of 2018. In addition Mr. Chiliza promoted the idea of psychiatrist getting more committed to lobby for the rights of people with mental disabilities in general as a result of the Life Esidimeni Scandal.

The event was concluded with an intensive discussion from the floor and final responses from the guest speakers. The audience agreed with the guest speakers that the work of activists group in South Africa, who represent people with mental and intellectual disabilities, needs to be strengthened. 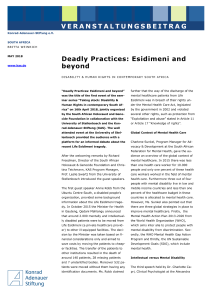 Deadly Practices: Esidimeni and Beyond