On the 24th of July 2018, the Konrad Adenauer Foundation in cooperation with the South African Institute of International Affairs (SAIIA), hosted a conference on 'BRICS and Africa: Navigating Global Economic Turbulence Together'.
July 25, 2018 Ordering Information 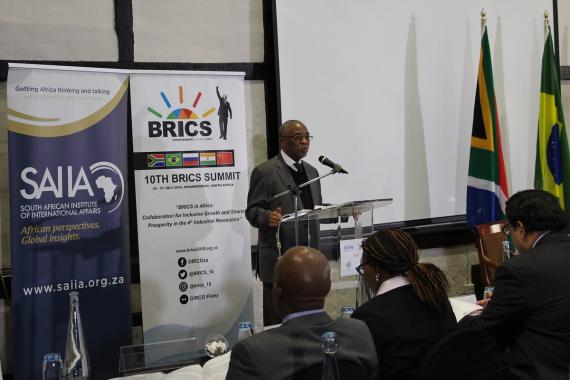 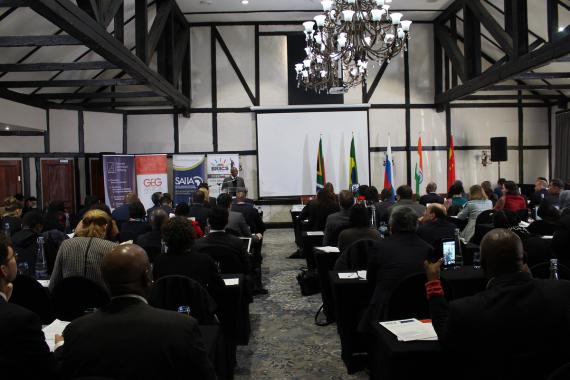 Part of the audience during the welcoming speech. 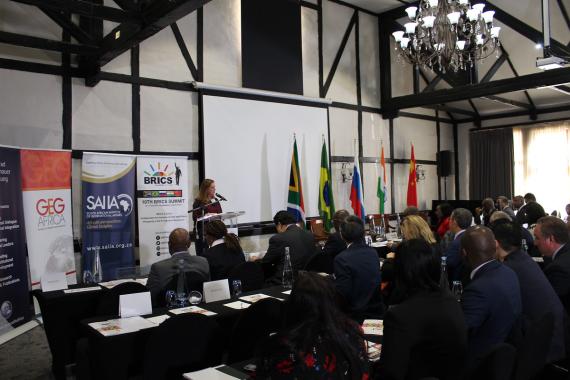 Part of the audience during the welcoming speeches. 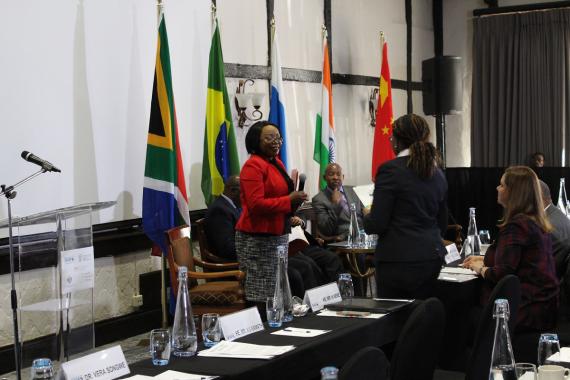 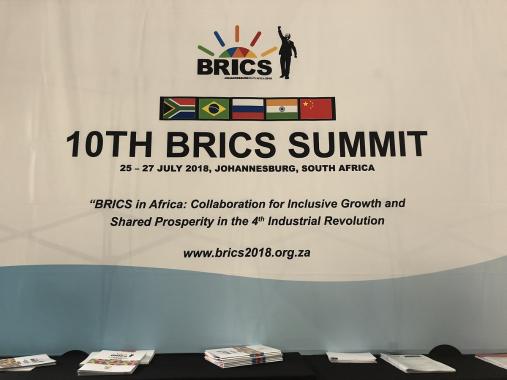 Information material for the conference and the 10th BRICS Summit. 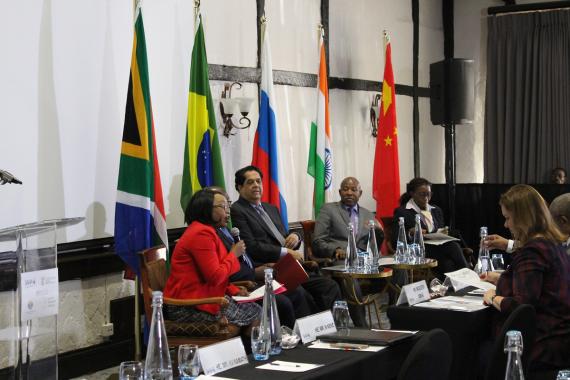 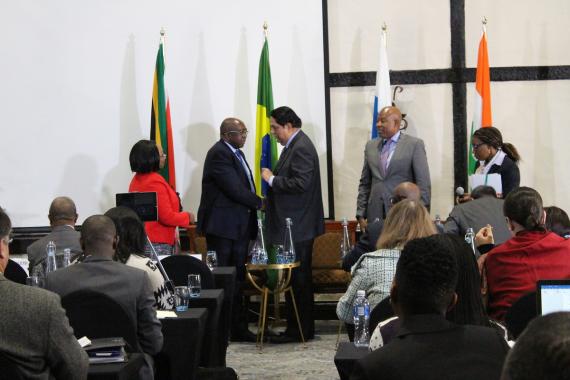 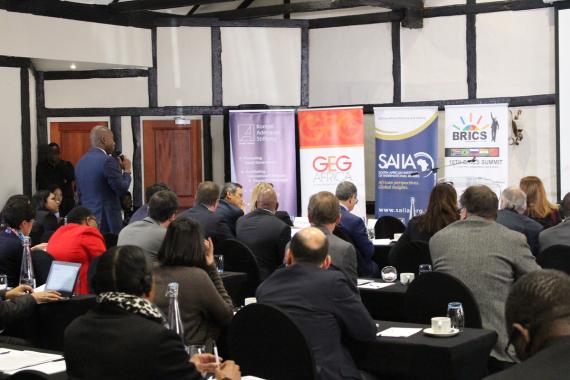 A participant during the discussion after the opening session. 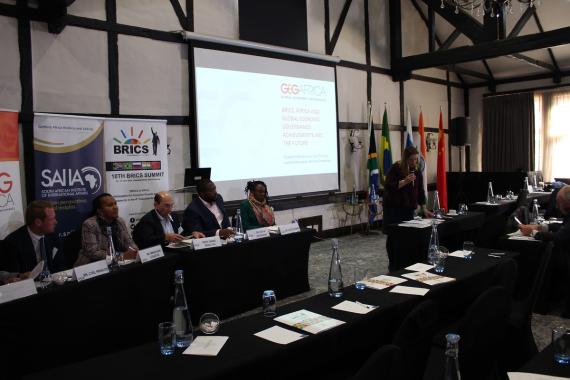 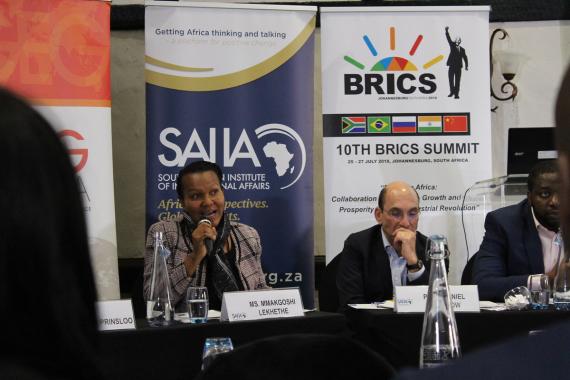 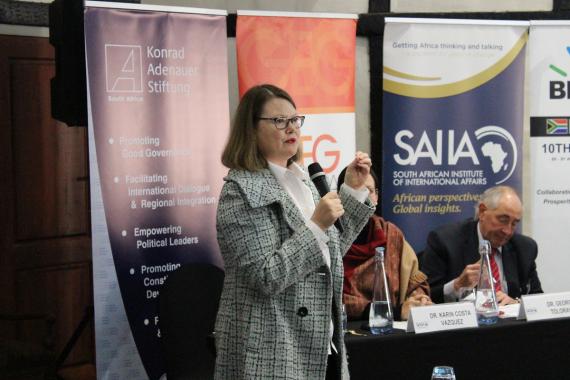 The conference’s overarching goal was to discuss South Africa’s key finance track priorities and to reflect on the achievements of the BRICS over the last decade but also to outline potential future challenges. Therein, implications of the changing global geo-economic context for African and developing countries were debated. BRICS’s engagement in global economic governance forums as well as inter-BRICS and inter-African engagement strategies were emphasized.


The conference was divided into three parts: First, South Africa’s 2018 BRICS priorities in the finance track were explored, then global economic governance reform and economic cooperation were discussed. Lastly, emerging challenges in the global economic order were debated with regard to BRICS and other developing countries.


His Excellency Minister Nhlanhla Nene (Minister of Finance, South African Treasury) began the opening session by highlighting that the conference’s theme of navigating global economic turbulence could have not been a better fit in the light of current trading and market conditions. With respect to the upcoming 10th BRICS summit, he pointed out that the conference provides an opportunity to reflect on the progress that has already been achieved since the summit’s inception but also to consider future challenges and obstacles.


All four presentations focussed on the importance of sustainable development and industrialisation within BRICS member states while the panellists emphasised the consequences and effects of the Fourth Industrial Revolution but also the opportunities new technologies provide. His Excellency Mr. Kundapur Vaman Kamath (President, New Development Bank) highlighted the need and opportunity for funding in local currency while especially Africa provides vast opportunities.

What is next for the BRICS?


A reoccurring theme was the importance of sustainable infrastructure and development. In times of growing global uncertainty, the question of what is next for BRICS becomes more central than ever. The panellists highlighted that BRICS has several enormous tasks to address: institutionalisation, internal cooperation, as well as regulation of agreements and decision-making. The question remains whether BRICS can suggest an alternative model such as a credit rating agency led by the BRICS bloc. The panellists stressed that a shift from emerging economies to emerging powers can already be observed and that the future impact remains to be seen.


Lastly, Ms. Luanda Mpungose (Programme Officer, SAIIA) concluded the key issues that were debated during the conference which included the emergence of the Fourth Industrial Revolution and, thus, growing opportunities, the importance of the inclusion of Africa, specifically South Africa, in order to avoid fragmentation, as well as various important issues of what should happen going forward and how this should be pertinent for Africa.

Video Material of the Conference


Panel Discussion: Perspectives from the BRICS on the Changing Global Order and the BRICS’ Response: Quo Vadis BRICS?