On the 27th of June, the Konrad Adenauer Foundation and the Centre of Unity in Diversity hosted the second roundtable discussion in Cape Town.
July 25, 2019 Ordering Information 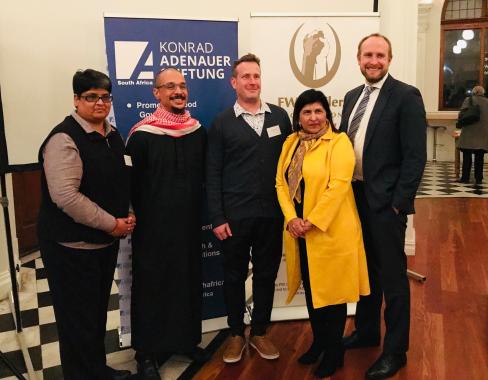 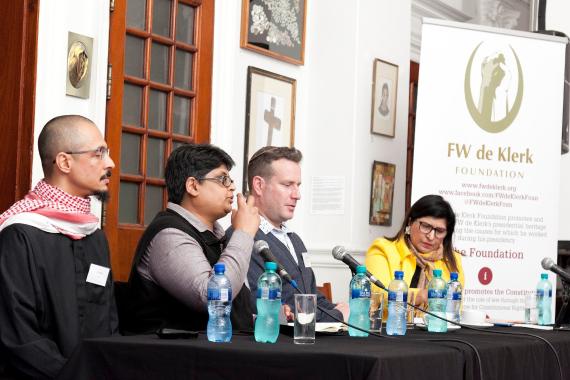 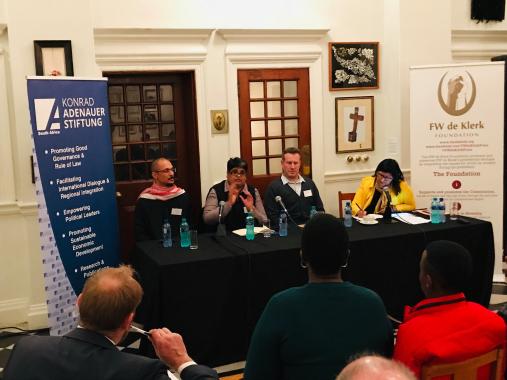 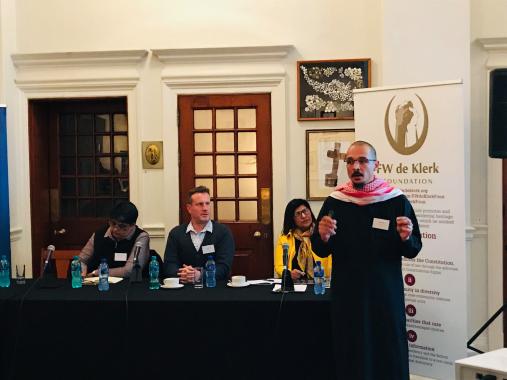 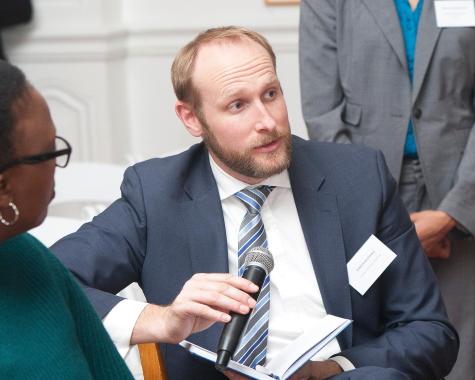 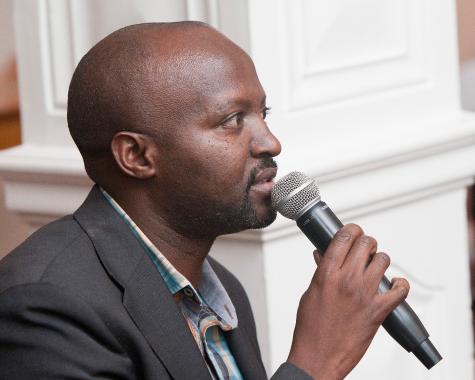 The audience stepped into the discussion.

…using race as a basis for voter analysis is not just inaccurate, but blunt when the label “black voter” describes 80% of the electorate…This event, titled “Identity politics in the 2019 elections and implications for SA” investigated whether identity – specifically race – defines voting patterns in South Africa. Are South African elections nothing but a race census, rather than revealing individual voters’ policy preferences? This would be a dire indictment of South Africa’s young democracy and its ability to deliver good governance. Thankfully, the event’s panelists refuted the claim that race defines South African elections. Please find a summary of the event below.

What is identity politics? It

“is contemporary shorthand for a group's assertion that it is a meaningful group; that it differs significantly from other groups; that its members share a history of injustice and grievance; and that its psychological and political mission is to explore, act out, act on and act up its group identity.” (Catharine R. Stimpson, NYU).

Identity politics reduces the complexity of individuals’ experiences and interests to a homogenous set, assumed to be uniform to all member of the group.

Ms Sanusha Naidu, Senior Research Fellow at the Institute for Global Dialogue, started off the discussion by, on the one hand, confirming that race/culture impacts the decision how we vote but, on the other hand, challenging the hypothesis by introducing income classes into the discussion.

In more detail, she explained that certain dynamics of race and class are more instructive in their intersection than independence. She pointed out that both race and income acted on the voting patterns of groups such as waiters, textile industry workers, lawyers and teachers. These groups did not vote monolithically either by race or by income.

Furthermore, she mentioned that in the recent election, age was a relevant factor beyond race. What does the fact tell us that most young eligible voters did not use their voice? In contrast to the older generations, the new generation does not regard the ANC as the liberator. While more and more aware of their interests, they are less than enchanted by the traditional views of political parties. Instead, they measure parties on the basis of their service delivery.

Beyond these ideas, Naidu pointed out that the nature of the election result also made it more difficult assess if voting followed individual interests. There is no substantial policy difference between the two parties (EFF and ANC) in terms of the economy, which means that choosing a party revealed little about a voter’s economic policy preference.

Mr. Reza Omar, Strategy Research Director at Citizen Surveys, supported the claim that several political parties do not diverge in economic policy, in particular the DA and ANC. Expanding on the policy theme, Citizen Survey assessed what policy positions voters associate with the three major parties. The ANC is the most well-known party, associated with maintaining roads, housing, water and electricity thanks to its position as the governing party. The EFF brand was strongly associated with fighting corruption while the DA had no policy association, a remarkable result and lead indicator of its poor showing at the polls.

Digging further into the Citizen Survey data, Omar revealed that racism and illegal immigration are a major topic amongst politicians but not the electorate. When asked about the challenges facing South Africa, most South Africans (73%) consider unemployment the major problem, followed by crime (34%) and corruption (25%). Racism/discrimination (4%) and immigration barely crack the top ten challenges mentioned and fall well short of double digit percentage support.

While there is broad agreement in the electorate about the problem of unemployment, no such consensus can be found in terms of the policy of land expropriation with compensation (EWC), despite politicians’ focus on it. Citizen Survey asked respondents if they agreed with EWC in favour of the previously disadvantaged. The response splits the nation in every facet reviewed. There is no universal support for EWC for groups sorted by age, LSM (living standards measure) or urban/rural.

In terms of race splits, while one would expect the beneficiaries of the mooted EWC policy – the black population – to be universally in favour of EWC, only 66% of that group expresses its support. As to political party supporters, no party’s supporters are in favor of EWC in a near totality – not even EFF supporters, though it was a key EFF electoral promise. There are greater differences within race groups that between race groups when it comes to supporting EWC. Low income trump race as a predictor of support for EWC. In Omar’s view, this suggests that support for EWC is actually about the challenge of unemployment.

Paul Berkowitz, a well-known data analyst and writer, agreed with these findings. His view is that using race as a basis for voter analysis is not just inaccurate, but blunt when the label “black voter” describes 80% of the electorate. He believes that identity politics is a suicidal strategy for local political parties, based on his experience in mapping voter support in South African elections since 2011. Political parties that have survived since 1994 were the ones that avoided geographic, linguistic or cultural concentration. The one exception is the IFP, which had a good 2019 election on the back of ANC failures in Zulu eyes but was consistently losing support before.

• If another international economic crisis occurs soon, South Africa does not have the ability to cushion its blow as in 2008, when the country’s debt was lower.

• Given the global context, generating jobs in South Africa means recognizing that our skill levels are not worth the money we are trying to charge for them. The only way to increase employment and our skill levels over time is to accept “sweat shop” jobs and wages like China, Taiwan and others did. Given South Africa’s past, it is unlikely that the population would accept sweat jobs as an acceptable answer

• Unfortunately, the Constitution is not evident in most people’s lived reality. For example, the Bill or Rights in the Constitution states that “Everyone has inherent dignity and the right to have their dignity respected and protected” – yet young mothers are sleeping on the streets with their infants, using plastic rubbish bags as blankets. The Constitution is not relevant to citizenry if it is just words with little obvious bearing on their lived experience.

• “South Africa’s identities are fractured and will become more fractured”.

• “Money knows no class, creed, race or ethnicity. Money knows only itself.”

• South African ruling politicians are not interested in growing the economic pie – they want to take more for themselves every year, even if the total pie is shrinking.

• “The youth are not apathetic. They are alienated.”

• In President Ramaphosa’s State of the Nation address, he promised 2 million jobs in 10 years – by then another 6 million additional youth will be looking for work.

• The new generation does not regard the ANC as the liberator with a blank cheque to power. Instead, they measure parties and the entire system of power on their ability to provide services and opportunity for an improved life.

• Declining youth voting is of concern because voting is a habit – cohorts that do not vote as young citizens tend not to begin voting later on.

Why has KAS supported this event?

South Africa's eleven different official languages is only one of many indicators of the country's diversity. In order to unlock the social potential of the country its diversity needs to be mapped out in civil society organisations and the elites. Only given a plurality of the former they can successfully accomplish their functions of social and political mediation, monitoring and shaping the democracy.

Hence, the Konrad-Adenauer-Stiftung in South Africa sees its role among others in promoting social cohesion and giving positive examples of peaceful coexistence of different social groups. For this reason, the foundation together with its partners facilitates cooperation with state and non-state institutions in the form of education, advice and research.

What is the aim of this series of CUD Roundtables?

In recent years the development of a normalizing co-existence of different population groups is reversing. Polarization and political instrumentalization of ethnic diversity became more and more visible and was excessively used in the run up of the 2019 General Elections.

In this context, this series of three roundtables promotes harmonious non-racial relations between South Africa's cultural, religious and linguistic communities. By attending the participants gain a deeper understanding on the nature of South Africa’s multicultural society and which steps and processes need to be undertaken to ensure national unity. 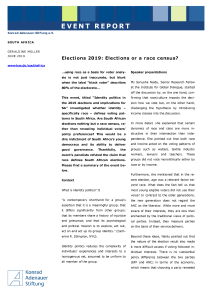