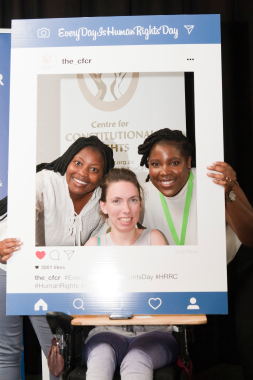 Every day is Human Rights Day 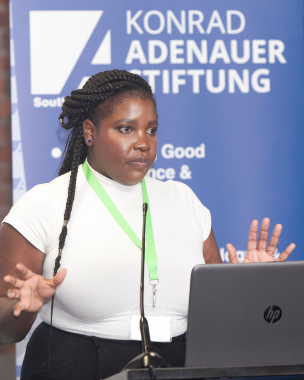 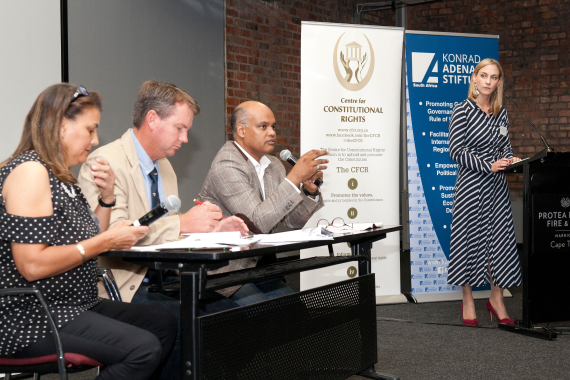 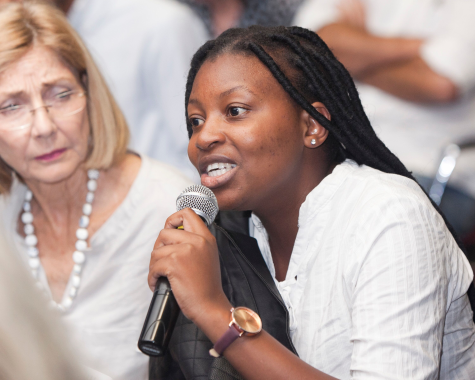 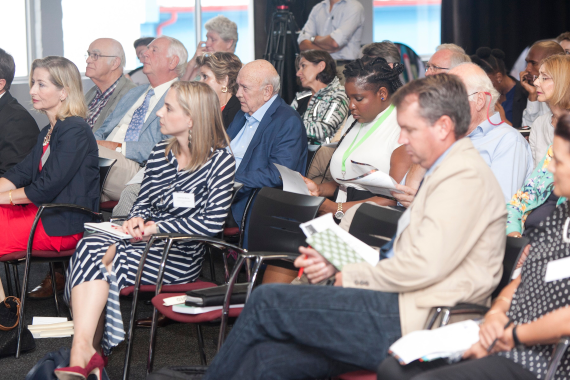 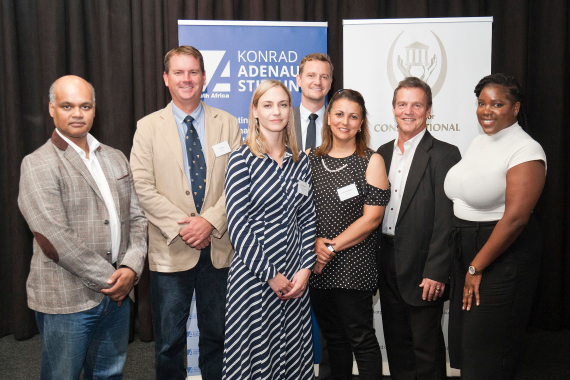 On the 19th of March 2019 the Centre for Constitutional Rights (CFCR) in cooperation with Konrad-Adenauer-Stiftung (KAS) hosted the launch of the annual Human Rights Report Card, the Centre’s flagship publication, at the Protea Hotel Fire& Ice in Cape Town.

This year’s Human Rights Report Card marks the 10 years anniversary of the publication, which measures the realisation of human rights in South Africa for the past year. Thereby, it covers the human rights stated in South Africa’s Bill of Rights, ranging from equality over freedom of expression to education or housing. For every human right the report awards grades on a scale of A to E, with A representing “excellent” and E representing “poor”. The evaluation and grading process is based on court decisions, legislation, repeated incident occurrences as well as data-analysis bodies such as Freedom House, United Nations and Statistics South Africa. Moreover, the publication serves not only as an overview of the fulfilment of human rights for the year of evaluation but also as a baseline from which future trends of human rights violations may be identified.

After the welcoming remarks by Christine Botha, Acting Director of CFCR, and Hen-ning Suhr, Resident Representative of KAS South Africa, who pointed out that KAS’ role of promoting democracy is inextricably intertwined with safeguarding human rights, some key findings of the 2018 Human Rights Report Card were presented.

A summary of the 2018 Human Rights Report Card’s findings

Botha first highlighted some key develop-ments that shaped South Africa’s human rights situation in 2018, for example the state’s attempt to fight corruption and re-store credibility of public institutions. Positive developments took place last year, such as the establishment of various commissions of inquiries. However, a slow pace of criminal investigations as well as a regression in audit outcomes could also be observed. Consequently, the right to equality was further examined. Since South Africa is ranked as one of the most unequal coun-tries in the world it comes as no surprise that this particular human right is ranked with an “E”, which describes a poor out-come. It is further noteworthy that there has been no improvement in the score of this particular right from 2017 to 2018. The right to equality was then split up in different sections, such as gender equality or the equality of outcome with a focus on disabilities.

Furthermore, Botha elaborated on property rights, which were downgraded from the previous year because of policy uncertainties in terms of the proposed change of Section 25 in the South African Constitution.

Rebecca Sibanda, legal assistant at CFCR, presented the second part of the findings by taking a closer look at freedom of expression, citizenship and access to courts. All three rights where scored with a “B”, which indicates a rather good result. However, the trend for two rights, namely access to courts and freedom of expression is negative. Both rights were downgraded in com-parison to the 2017 Human Rights Report Card. Among others, Sibanda mentioned the challenges for refugees because of South Africa’s legislation and the problems inherent in statelessness, particularly for children born by foreigners in South Africa.

In addition to the elaboration of the Human Rights Report Card’s outcomes three speakers reported their daily work experience when it comes to the realisation of different human rights in South Africa.

First, Ghalib Galant, Deputy National Coordinator for the Right 2 Know Campaign (R2K), draw attention to the fact that it is not enough to see Human Rights as rules that exist on paper. It is also not enough to have dedicated institutions and courts to enforce those rights. What is required in order to make Human Rights a reality is a concerted effort by the whole of society. For this to happen citizen need to see tangible outcomes of human rights and experience them in their daily life. In Galant’s opinion this is not the case yet in all sectors after 25 years of democracy in South Africa.

Jay Kruuse, Director of the Public Service Accountability Monitor (PSAM) highlighted the importance of strengthening participation mechanisms so that protest is not seen by many South Africans as the only way for civil engagement. Citizens want to see consequences for the abuse of government funds, corruption and maladministration. They feel the urge to voice their concerns and frustration in a country that has an un-employment rate of more than 20% for the last two decades. With the various challenges that South Africa is facing, access to information is crucial in Kruuse’s view. Therefore, not only access to information but also making information comprehensible for a wider audience is the key to transparency and accountability.

Fiona van Kerwel, Project Manager of Words Open Worlds (WOW) at the University of Stellenbosch, touched on the important role that language and cultural rights fulfilment plays in South Africa. For several reasons, she advocated for the implementation of multilingualism in the country. Language receives meaning through human interac-tions and thereby forms an important part of any culture that is used for communication and identification. Since language is the medium to gain school and work qualifications, government should strengthen its effort to enforce multilingualism. Van Kerwel emphasized that a change in language policy would not only have a positive impact on communities cultural identity but would also have a positive impact on their socio- economic situation since it would be easier for school children from these communities to succeed when taught in their mother tongue.

The presentations were followed by a Q&A Session, where the audience had the possibility to ask questions. 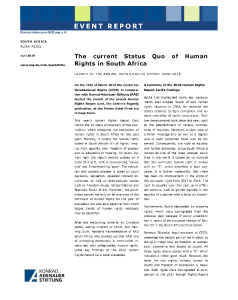