On the 8th of June 2019, the Konrad-Adenauer-Stiftung (KAS), the Centre for Constitutional Rights (CFCR) and The Justice Desk jointly hosted an interactive educative event aimed at unpacking constitutionally enshrined rights.
June 14, 2019 Ordering Information 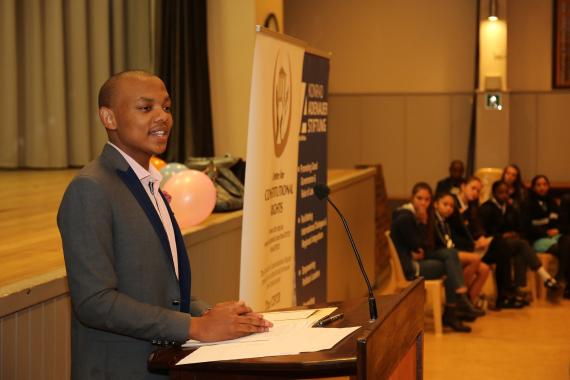 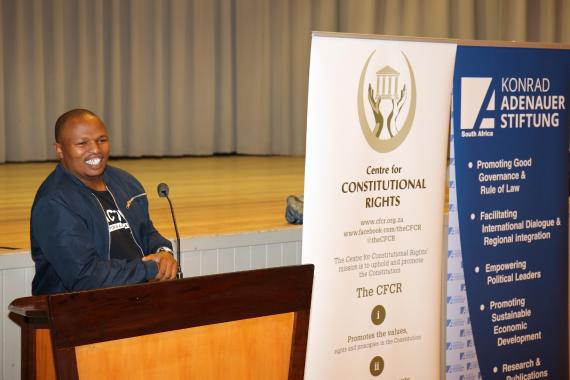 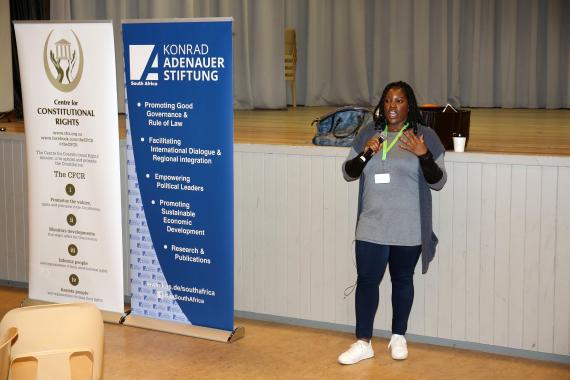 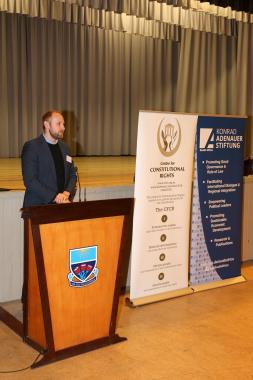 The event is part of an annual youth dialogue - this year’s focus was human rights activism and the youth voice.

Christine Botha, the Centre for Constitutional Rights’ Acting Director, welcomed the audience of voluntary pupils from ten schools in and around Cape Town, which were greatly varied in location and resources. She commenced by presenting the work of the hosting organization, the CFCR. The Centre monitors any development that may affect the constitution and publishes texts on issues every week. They furthermore also engage in case studies or file submissions in Parliament. In hosting the Youth Dialogue, the Centre wishes to contribute in the formation of active citizens, offering the youth a platform to participate and make their voices heard. To show the power of the youth voice, Botha played a video clip that reported on the student-led movement “March for Our Lives”. Established following a shooting at a Florida school, the movement protests gun violence in the United States and won the International Children’s Peace Prize 2018 for their efforts.

Christiaan Endres, Project Manager of the Konrad-Adenauer-Stiftung, then made welcoming remarks. He explained KAS’ work and its role in this event. He linked the topic to German history and explained how the horrifying experiences of the Holocaust have developed the desire to foster constitutional values and human dignity around the world, in order to prevent such a human-made catastrophe from ever happening again. Endres moreover elaborated on South Africa's transition from a parliamentary democracy to a constitutional democracy and explained that the differences.. He ended his welcome by acknowledging the importance of all the young voices in the room, as standing up for one’s responsibility is not limited to adults.

The event included many interactive features. After mixing the audience to ensure that it was not sorted by schools, Ignatius France from The Justice Desk explained the work of his organization. The Desk works internationally including in Zambia, Zimbabwe and South Africa. Their aim is to educate, advocate and equip people with knowledge on human rights. They understand that having constitutional provisions does not necessarily mean the possibility of access to those rights.

France then engaged with the audience by asking straightforward questions on the topic: “What is a human?”, “What is a human right?”, “what is social injustice?” and “what are human rights violations?”. He explained the crucial but often unrecognized difference between actions driven by a) charity and b) a pursuit of social justice. Charity is personal, individual, immediate, impermanent and represents a power relationship between the giver and the receiver. In contrast, justice is systemic, public, slow, more permanent and represents an impersonal but all-pervasive social contract. France led the audience to realize that charity was important but that activism is about social justice, not charity.

Many insightful contributions from the extremely engaged and well-informed audience triggered some deep reflections on the questions.

The next speaker, Kayla Brittain, the Operations Manager of The Justice Desk, presented some practical ways for the listeners to stand up for human rights. She explained her understanding of what it means to be an activist. Her first point was that activism is usually misunderstood as being exemplified by an angry or even violent demonstration or march. She unpacked the image. Instead of anger, successful activism is defined by passion. Given the many changes needed in the world, it is passion that allows one to sustain and focus one’s effort. Instead of a demonstration or march, successful activism is characterized by planning before and after a demonstration. To effect change in an issue requires long, often anonymous work to ensure precise and continuous pressure on the maximum point of leverage.

Furthermore, Brittain communicated that activism is much like voting – and that voting is more than just casting a ballot at an election. Voting happens every day in our normal lives. She believes that in every action we take, we are voting either for or against something. That means we should evaluate the language we use, the products we consume and the behaviors we engage in constantly to ensure that our actions align with our beliefs and morals. Social and political change is made in cumulative small behavioral change, which illustrates the importance of immediate action.

Brittan concluded with a quote by Malcolm Bane:

“If you wait until

you can do everything for everybody

instead of something for somebody,

not doing anything for anybody”.

Brittain and France then organized a quiz game for the pupils, in which the students displayed remarkable knowledge in the fields of human rights, crimes against humanity, children rights, and justice.

The last speaker of the afternoon was Thembalethu Seyisi, an LLB Student from the University of Stellenbosch. As a young person himself, he was able to deliver a different perspective on the role of the youth in South Africa. He explained that there are severe problems of inequality, youth unemployment and discrimination in the country. However, he believes that the young can contribute to changing and solving these problems and exemplified his own efforts of filing a successfully accepted submission on a constitutional violation to Parliament. The youth of 2019 is facing very similar challenges to that of 1976. The struggle for education has developed into the struggle for free education, the struggle for equality has progressed to the struggle for gender equality. Thus, it is important that the youth participates by voting, protesting or merely identifying a pressing issue in their community.

Rebecca Sibanda from the Centre for Constitutional Rights concluded the event by thanking the partners and complementing the audience for their engaged participation. 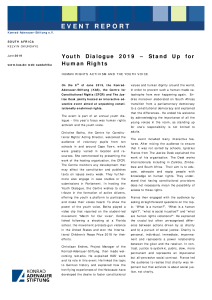