FROM PARIS TO GLASGOW, COP 26 AND IMPLICATIONS ON CLIMATE POLICIES

In times when society has become widened with gaps and differences of views and opinions, one issue could be escalated into a crisis if there are no platforms available for appropriate discussion among all concerned.

The media, while informing and inspiring their audience, could also take an educating and facilitating role to serve such a purpose, acting as a bridge and helping connect the dots into one big picture.

In collaboration with its partners and with the support of Konrad-Adenauer-Stiftung (Thailand Office), Bangkok Tribune Online News Agency has come up with a monthly forum on issues of importance, under the project, “Dialogue Forum”.

This is to facilitate and provide a space for discussions and exchanges of dialogues and views as well as information regarding critical social and environmental issues both in Thailand and the Mekong region, thus not only bridging the gap and connecting the dots, but also helping forge understanding among the public and the parties concerned, encouraging them to make a decision about the issues better or even find a common ground and seek solutions together.

In August, the Intergovernmental Panel on Climate Change (IPCC) launched the first part of its periodical Sixth Assessment Report or AR6 to assess the state of the world’s climate. The UN’s top post, Antonio Guterres, called it, “a code red for humanity”.

Besides stark and stunning sets of information that wake people up to the climate reality and its impacts that could last for centuries, the report has also painted a shocking picture on the rising temperature, pointing that if nothing is done the world could pass the 1.5 degrees Celsius threshold in the next 20 years!

According to the UNFCCC’s latest update on the voluntary cuts on GHGs known as Nationally Determined Contributions or NDCs, the world is still on a catastrophic pathway to 2.4C by the end of this century. To limit the rise to 1.5C, a 45 per cent cut in emissions is needed by 2030 and zero emissions by 2050.

The commitments by countries to date, the organisation noted, imply an increase of 14 per cent in GHG emissions, on a contrary. Other sticking points concern adaptation and financing, under which $ 100 billion a year for “climate action” in developing countries is needed, as well as funding for adaptation to at least 50 per cent of total public climate finance expenditure.

According to the UNFCCC, adaptation costs in the developing world are estimated at around $70 billion a year, and they could rise as much as $300 billion by 2030.

Countries have reached the deal at COP26 with an introduction of Glasgow Climate Pact. It remains to be seen what the implications of the pact would be like.

The Dialogue Forum, which opens a space for such critical discussion, therefore, would cordially like to invite you to explore the new deal as well as its implications for countries like Thailand at Dialogue 6: From Paris to Glasgow, COP 26 and Implications on Climate Policies as part of the climate forum series on December 2 from 12.15 pm-2.30 pm via Zoom.

The topic of the discussion presented

Dr. Wijarn Simachaya, Chairman of the Greenhouse Gas Management Organization and director of the Thai Environment Institute (Former Permanent Secretary, Ministry of Natural Resources and Environment) will talk about COP 26 and its implications for national development policy.

COP 26 and its implications for relevant sectors.

Dr. Suwit Thaninpanich, Chairperson of the Working Group on the Promotion and Support of Industrial Greenhouse Gas Emission Reduction Federation of Thai Industries 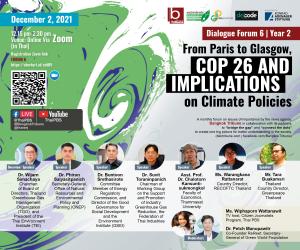