Summary of the KAS-ABAC Conference on Ecological, Social and Economic Sustainabiliy in Thailand and the ASEAN Region

This one-day conference on the topic of ecological, social and economic sustainability within Thailand and ASEAN’s economy took place on November 28, 2013 at Assumption University, Bangkok. The goal of this conference was to find a solution for the ecological, social and economic problems created by the integration process of the ASEAN community. This comprehensive theme was discussed from a total of six different perspectives.
January 15, 2014 Ordering Information 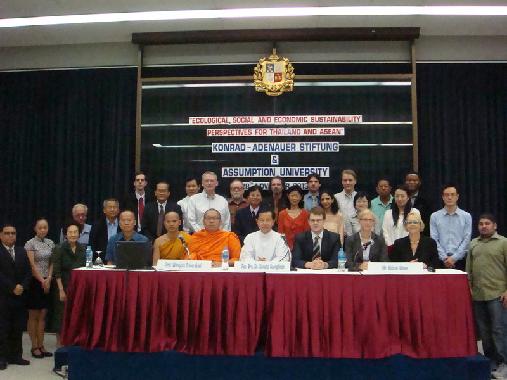 The first session was concerned with the topic of economic sustainability. In his speech, Prof. Dr. Seri Phongphit argued that economic sustainability is not yet observed in reality, but instead remains a philosophic idea, which originated from principles of capitalism and socialism. According to Prof. Dr. Phongphit, three criteria need to be fulfilled in order to reach economic sustainability: moderation in human behavior, reasonable consumption of goods and services, as well as appropriate economic behavior. The education system functions as a foundation for such profound changes.

The next session was led by Prof. Apichai Puntasen who outlined the problems of ASEAN’s integration process from a religious point of view. According to the concept of Buddhist Economics, he applies the Buddhist mind-set to find solutions for economic problems. The Buddhist way of thought not only allows humans to use their minds to its fullest capacity, but furthermore creates a new dimension of reality that is supposed to be more realistic than the conventional scientific approach.

During the third session, Dr. Chamniern Paul Vorratnchaiphan examines the implications of trans-boundary natural resources for the sustainable development of the ASEAN region. He emphasizes that sustainable development can be reached through partnership, equity, consideration for the prosperity of nature, and anticipation of consequences for future generations. Especially cooperation in the field of environmental protection is of great importance for the economic as well as social development. Additionally, the speaker proposes an Earth Charter which is supposed to facilitate the creation of a more sustainable and peaceful world.

The fourth session examined problems of ASEAN’s integration process from the perspective of the relationship between humans and nature. In his presentation, John T. Giordano analyzes the relationship between humans’ lucid understanding of nature and simultaneous increase in destructive behavior. During the course of this session, the intelligence of machines is examined through the comprehension of poetry.

The fifth speech, which was held by Dr. Charn Mayot, was centered around a philosophical approach that was used to examine the agriculture-based economy with regards to sustainability in economic and social developments. Finally, Prof. Dr. Kampanad Bhaktikul concluded the conference with a review of the floods taking place in 2011, and an outlook on the future of the ASEAN community.

Overall, this conference was able to give its participants a greater awareness of the ecological, social and economic consequences resulting from the integration process of the ASEAN community.