NATO at 60: Transformation to a Global Security Provider?

by Canan Atilgan
On the occasion of the 60th anniversary of NATO, Konrad Adenauer Foundation organized an international seminar on NATO. For the first time the role of NATO in the security order of the 21st century was analyzed together with relevant actors from Thailand. This event has broadened the understanding of NATO’s provision and role to Thai authorities. Moreover, one of the controversial issues is on terrorism that has become one of the most vital and challenging aspect to the future role of NATO.
April 9, 2009 Ordering Information 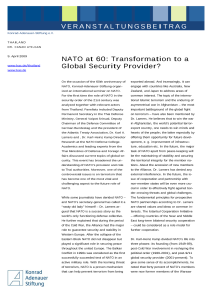 NATO at 60: Transformation to a Global Security Provider?