The seminar took place on the first of July in Centara Grand Hotel, Bangkok. Not only jurists, politicians and political scientists, but also members of the Constituent Assembly and the president of the Electoral Commission were present.
July 10, 2015 Ordering Information 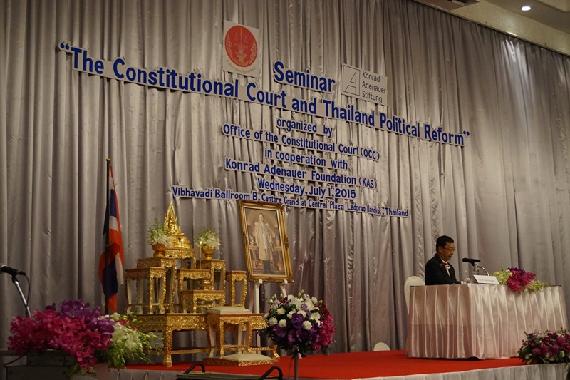 KAS
The president of the Constitutional Court of Thailand, Mr Nurak Marpraneet, opened the seminar. 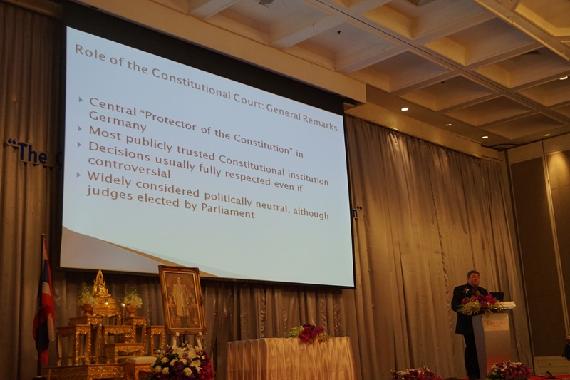 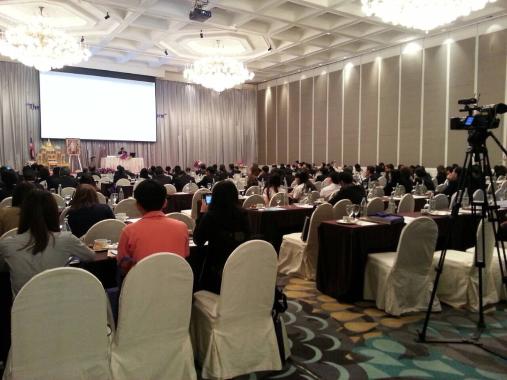 KAS
The seminar brought about much interest among the participants from the academics, politics and governmental offices. 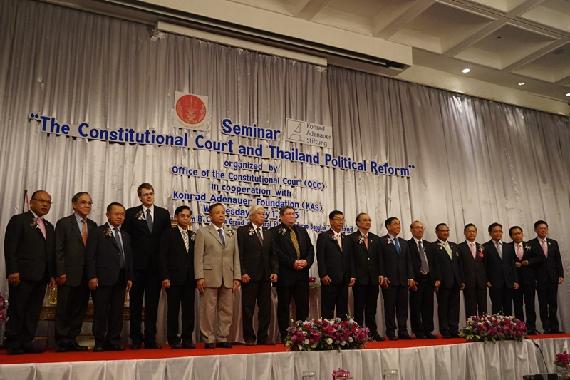 KAS
Group photo of the speakers, organisers and the high-ranking Thai politicians

The event was opened by the president of the Constitutional Court of Thailand, Mr. Nurak Marpraneet, and the representative of KAS-Thailand, Mr. Michael Winzer. After that Prof. jur. Jörg Menzel - Assistant Professor, Insititute for Public Law, University of Bonn, Germany and German-Turkish University of Istanbul, Turkey – lectured on “The Electoral System in German Constitution: Principle and Practice”. The second lecture by Prof. Dr. Banjerd Singkaneti (National Institute of Development Administration) informed about “The Constitution and the Political Reform”. Finally, the stage opened the chance for the participants to put further questions to both Prof. Menzel and Prof. Singkaneti and raise various discussions during the panel section.

The speakers focused on the electoral system in Germany as Thailand may include some elements of the German concept in the new constitution. Everybody agreed that the system has to be adapted for Thailand’s needs and conditions, but the idea of the personalized proportional voting was considered as a good method to let people vote for their preferred candidate as well as for their preferred party. Another important element of German electoral system is the subdivision in 299 constituencies. Each of them has their own list of candidates and that way, the elected members of Parliament really represent the local will. But one has to be aware of the federal tradition in Germany, which isn’t a part of Thailand’s history. Thailand’s customs on voting have to be weight up against the use of constituencies.

Another big question concerned the competences of the Constitutional Court. In Germany there are many powers as protecting rights and liberties in society, reviewing constitutionality and safeguarding minorities’ rights in Parliament. But advising on law-drafts is not provided, except on laws for the whole European Union.

A further important task of the German Constitutional Court is the hearing of individual complaints. Most of the complaints don't require law proceedings but can be solved in smaller meetings, but sometimes a charge has national relevance. This possibility of complaining directly to the highest instance strengthens the public discourse and improves the Court’s image in society as a transparent Court committed to the citizens’ problems. But according to Prof. Singkaneti, the individual complaints right shouldn’t be implemented until the Constitutional Court of Thailand has been established as an accepted authority.

Speaking of the Court’s abilities, the border between law and politics was discussed to diminish the Court’s power on political matters. However, limiting the power would not solve the problem because many legal proceedings could be considered as political relevant. Instead the politicians should ensure to only nominate respected and competent judges to prevent the Court from becoming a politically prejudiced instrument.

Not only is the choice of the judges an important issue, but also the members of the nominating committee should be responsible, acknowledged politicians. Otherwise the state institution would not be respected as a neutral court. Some speaker even proposed that all committee members have to declare their taxes and incomes, but, as they don’t have any supervising position, this proposition was refused.

In Germany the Constitutional Court has two chambers with eight judges each. Therefore it needs at least five people for a majority. In Thailand political institutions traditionally have an odd number of members to fasten the decision making process. The numbers of judges – eight or nine judges – doesn’t affect the court’s will to reach a consensus.

The distinguished group showed a lot of interest and made it possible for the speakers to debate in a controversial, constructive way. At lunchtime the participants had the chance to continue the discussions privately and ask further questions. Everybody was content with the results of the seminar.