Social media on the rise

The number of people in Uganda who have access to the Internet is continuously growing. Due to the power of social media, more and more people find it attractive to communicate via Facebook, Twitter, WhatsApp and others. But there are many voices within government who want to regulate social media networks. Does that mean, the free space which social media creates is jeopardized?
July 18, 2016 Ordering Information

Uganda is the youngest country in the world – at least population wise. More than three quarters of the inhabitants are below 30 years old. Most likely, this is why Twitter, Facebook, WhatsApp & Co. enjoy increasing popularity. At the end of June 2016 there were almost 12 million Internet users in Uganda, which are about a third of the entire population in the country. At least 1.8 million of them have a Facebook account. Four years ago there were only around 560.000 Facebook users in the country. Like other parts of the world, Uganda experiences a shift from traditional media to online sources. According to the Afrobarometer, six percent of the Ugandans read their news on the Internet. 95 percent of those consume news via Facebook, says Rosebell Kagumire, an expert for social media. 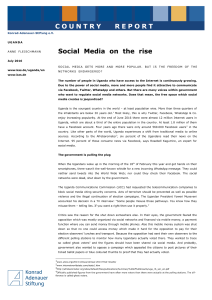